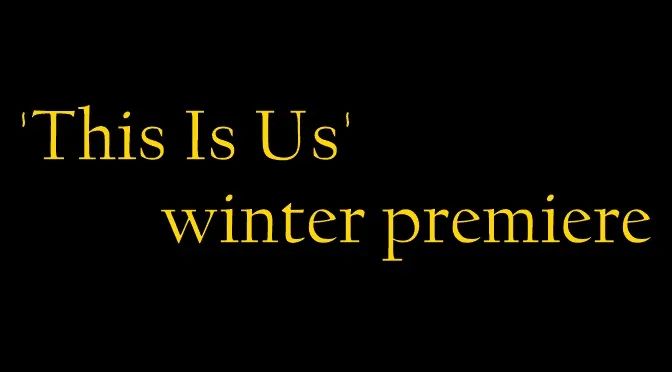 Since its September 2016 series premiere, NBC’s This Is Us, has sucked viewers in with its unique, hitting-on-all-of-the-feels approach, and refused to let go. When the show aired its fall finale in early December, fans were traumatized when beloved character, Toby, collapsed in the midst of the Pearson family’s Christmas Eve celebrations. The episode closed with him fighting for his life – after he so gallantly won back the heart of his lady love, Chrissy Metz’s Kate. Fans were clinging to Mama Pearson’s whole, “Nothing bad happens on Christmas Eve,” line from a flashback scene with the younger Pearson brood…

But enough of the looking back, let’s get to the now (ironic given that this is a show that has found its home comfortably in the past and present), but I digress. Fortunately we weren’t made to wait long in the winter premiere of This Is Us, as promised by the show’s creator, Dan Fogelman, it was indeed within the first five minutes of the episode that we FINALLY learned Toby’s fate. If you’re ready, we’re ready, let’s talk. If you haven’t watched it yet and you don’t want things spoiled, click away from the page, my friend.

This Is Us winter premiere: The Right Thing to Do

Jack & Rebecca pre-babies - The Right Thing to Do took us back further than ever before, giving us a peek at Jack’s childhood, which clearly wasn’t the warm and fuzzy world he worked so hard to create for his own brood. From there we’re finally privy to the moment when Jack and Rebecca learn they’re having triplets. And a first, FIRST true look at Dr. K’s world intersecting with the Pearson’s. We also spend all of our Jack and Rebecca time during pregnancy. As the couple reels from their ginormous, life-changing news we see Jack as a man who will be a problem-solver for his wife, no matter what.

As for the wrapping of the minds around having triplets, panic seems to be the word of the day. Understandably so. After having found and secured their dream apartment, they realize what would be perfection for a family of three is not so ideal of an instantaneous family of five. One of the highlights for me was their conversation over trying to get the security deposit back, to every one of Rebecca’s suggestions, Jack already tried, and then, “I could cry,” she suggests. “I did,” he replies. Which eventually leads to one of their best exchanges for me:

Rebecca: “I’m upset. And I’m hormonal. And I have three human beings living inside of me.”

Jack: “Yeah, just full waterworks, like little boy… we’re not getting the security deposit back. But I’m gonna figure something out.”

And in the end. He does. He so totally does. But before we get to that…

Toby & Kate - HE’S ALIVE!!! Hallelujah! #PrayforToby clearly worked. Even after having a cardiac event (not a heart attack, an arrhythmia), the man is bringing the jokes. Much to his doctor’s delight. You know, before he dropped the other shoe. Didn’t we all know that when he showed up alive and joking that wasn’t going to be the end of it? Pausing there we’ll move on to…

Randall/Beth/William – First, can I just say, I don’t think I could possibly love Beth more. Never mind how she and William play off each other. Why is that man dying? Why??!

When Randall goes to Beth to work through why he’s totally bugging over William and Jessie – thinking that he’s actually homophobic and just never realized it. To which Beth assures him that is most definitely not the case.

As much as I so desperately hate this hashtag, Randall and Beth genuinely are #RelationshipGoals. For realsies. They’re right up there with the other two TV marriages that round out my top 3: the McCord’s on Madam Secretary and Adam and Kristina Braverman of Parenthood fame. That is all.

Toby’s not out of the woods yet - Now we’ve got a very small hole between two of the heart’s chambers? Of course we do. See, there’s no getting complacent, people. You can’t take these gifts at face value. Doc is strongly suggesting surgery. Meanwhile Toby has latched onto medication being an option. Kate is pro-surgery as she’s gently and not raising her voice advocating for him to do the surgery.

Back in the day – Jack, working towards the problem solving, goes to his boss for a raise at a money pit of a house Jack and his crew have been working on. So he lands the raise, but it’s still not enough to get them out of the apartment and where they need to be. Cue Rebecca’s lunch with her “passive-aggressive” mother (played by Elizabeth Perkins), who drives Rebecca nuts. She leaves that lunch with her mother’s plan that she, Jack, and the babies will move in with her parents. Um...

To the stage! So Kevin and Sloane are really doing this play thing. Initially I’m thinking Ron, the director, we’ll have to love him. Such a funny girl, I am. But before we can really get where we’re going Sloane decides to have the “let’s define our relationship talk.” Good times. Especially when they’re being all cute and “I like that there’s a ‘we’ for us to be discussing,” cue Olivia. Of course.

Fickle, FICKLE Ron. “Thank God, we were dead without you!” Really Ron? Really? After all the talk of “it works, there’s chemistry”…Blah, blah, blah. Oh Ron.

Randall’s awkward bonding - Randall tries to bond with Jessie, per Beth’s suggestion. Awkwardly starting off by offering the former addict a drink. It doesn’t get better from there. We’ve got awkward silences, missed jokes about William and Jessie meeting via Tinder…Ultimately, though, you’ve just got to feel for Randall who’s heart is clearly breaking all over the floor as William heads out with Jessie and says he’ll be staying the night there, and “play it by ear” regarding whether he’ll be back the next day.

We heart Toby - Seriously, Toby is the most beautiful, funny bright light. I love this man.

Toby: “The surgery. In an hour. I wanted you to be informed, but I didn’t want you to freak out.”

Toby: “Yeah, the original version of that text had like 10 more crying faces. Uh, I’m a little stressed out.”

Then he does it. He drops the ‘L word,’ atta boy Toby! That’s the way to head into surgery. I’m over here going, uh, hello, Kate, where’s the “I love you too…”??? No worries, she covers her lack of response for me moments later. Which leads us to…

The Big Three – Kate to her brothers: “I brought you here to distract me. And you both are doing a terrible job.” Like the good brothers – to her, anyway - they are, they look (at least Randall does) suitably chastised and attempt to do better.

Randall to Kevin: “Two beautiful women wanting to be with you, that’s not a problem. You want to know a problem? A problem is your dying, biological father all of a suddenly turning gay. That’s a problem.”

Kate: “Why is that a problem?”

A back in the day reality check – Jack knows the whole moving in with Rebecca’s parents plan is not one that will work well for his wife’s peace of mind. Especially after she sends Jack on a mission for mint chocolate chip ice cream, and he returns to discover Rebecca sobbing her heart out. What’s a man to do? Well, that man goes and visits his abusive father and asks him for a loan. We get another look at the complete jerk that is this man. But ultimately Jack leaves with a check, never (it appears) having actually admitting why he needed the money. As far as his father knows, he’s got a gambling problem and he’s bad with money.

Know your audience – Back to the theater, we find Kevin sitting face-to-face with Olivia, telling her he’s keeping Sloane in the play for a whole variety of reasons and he’s going to keep seeing her for a whole ‘nother list of reasons, and then he ruins it. “And you know what, sometimes you just gotta do the right thing. You gotta do the right thing, even if it’s not what you want.” P.S. Sloane is, of course, overhearing it all.

Exit Olivia. Ultimately, exit Sloane. Not at all sure how this little broken love triangle is going to play itself out. Do we really think this is the last we’ve seen of Olivia?

Toby & Kate - Back in the hospital room, as Kate’s talking to an unconscious, post-surgery Toby, she drops her own ‘L’ bomb, which we learn she’s never said to anyone she’s not related to. Naturally, as she’s pouring her heart out, Toby is actually very much awake: “…I’d marry the hell out of you Kate Pearson.” Now hopefully Kate can just stay out of her own way in their relationship…

Randall & William - Bottom line: Randall is feeling like he’s a second thought to William. William explains that it’s not about pushing Randall and his family aside, it’s about the reality that he’s feeling this cancer coming for him now and it’s coming “sooner rather than later.” Jessie’s been taking him to nursing homes and make arrangements. William reveals that the medication isn’t working anymore. (Tissues, all of the tissues!) And they come to an understanding together that it’s time to stop taking the chemo meds. I cannot imagine having to say goodbye to two fathers in one lifetime…

Jack & Rebecca – After Jack received the check from his dad, he goes on to sell his beloved car, and rounds out his problem solving extravaganza by buying the money pit he and his crew have been working on.

Now, I’m not sure that the answer is buying a house without ever having a conversation with your wife, but in the end, his enthusiasm is infectious, and it’s Jack for the win.

So, how are we feeling after all of that? Uplifted? Broken-hearted? All of the everything?

Cast of This Is Us: