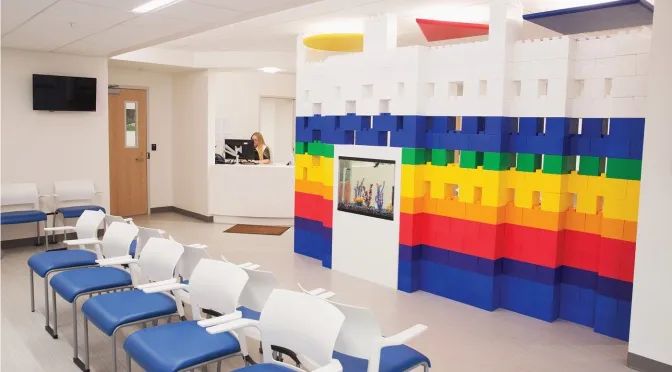 Inside the Children’s Clinic of Billings' Makeover

Chances are good that if you grew up in Billings, or are raising children here, at some point you have walked through the doors of the Children's Clinic of Billings. The doors at the downtown location now open to a much more pleasant interior after an extensive remodel, featuring bright spaces flanked by colorful giant LEGOS, vibrant animal photos, and a large fish tank that also hosts figures of Nemo and Dory from Finding Nemo.

The Children's Clinic has a long history in Billings and is now on its second- and third-generation of patients from the same families. The Clinic was founded by three friends who met during medical school at the Children's Hospital in Denver. They launched the Clinic in a converted house in 1953 and moved to 28th Street in 1954.

As the clinic grew, so did the need for better-suited facilities. In 1997, the clinic moved to the second floor of the Medical Arts North Building across the street from St. Vincent Healthcare, where it remained until last fall. Eight years ago, the group built a new facility on the West End, but the downtown location was nearly bursting.

Administrators scrambled to make room and change schedules so everyone could fit into the existing downtown location, but it was becoming more apparent that drastic changes were in order.

"It worked, and our team was great about making it work, but it was far from ideal in terms of workflows," said Danny Zimmerman, Clinic administrator. "As you walked in, doctors' backs would be to patients as patients were walking down the hall. It was small and cramped so we could provide care, but it didn't look good, and it didn't flow well."

Two years ago, conversations began in earnest about how to address the confined workspace without leaving the downtown area. While the Clinic is private and physician-owned, the providers work closely with St. Vincent Healthcare to offer newborn care and lactation consultations, along with a variety of other pediatric-related services. Staying in the same location enables doctors quick and easy access to their patients in the hospital.

The top priorities were to design something with better function and greater space. The downtown location needed to add a third physician, but finding space to house everyone was a huge obstacle.

He said the planning team sought input from patients, families, staff, and relied heavily on feedback from their Patient Family Advisory Council to design an ideal environment. He estimates that they went through nine or 10 iterations before settling on the current floor plan. "We spent a full year thinking about it. We did a lot of work with our staff asking what elements of our West End clinic work really well, what elements don't work well, and how we can change that here," Zimmerman said.

Like the West End location, the downtown Clinic has two separate waiting rooms for sick and well children, with a wall of giant LEGOs encasing an aquarium between the two spaces. From the bright and friendly waiting room, children find their way to their exam room by following (or hopscotching, in many cases) colored tiles that match the door frame's color.  Each exam room has a matching accent wall, and nearly every wall is adorned with close-up photos of animals, which were taken by the Clinic's own Dr. Lionel Tapia.

"We put a lot of time into the patient experience," Zimmerman explained. Inside the exam rooms, less apparent details point to the careful attention to the design. A local carpenter made the exam tables safer by not including drawers that kids often climb on, and rounded the corner edges of desks and tables to avoid serious injury if a child hits a head on them. Peterson Quality Office was “proud to have been a part of the Children’s Clinic job!” They provided a lot of the furniture throughout the office, all carefully selected with the users in mind. The chairs in the waiting room are flexible and designed to adjust and conform to the natural movements of the body. The desks throughout the clinic are adjustable height to support multiple work positions and health benefits of movement throughout the day.

With double the number of exam rooms, wait times have dramatically decreased, and providers are able to work much more efficiently. “Patients aren’t having to wait for us to free up rooms, which is one of the major restrictions,” Zimmerman added.

"The really cool thing about this space is that we finally have a space where the appearance matches the quality of care that our patients are receiving. You go out on the West End, it's beautiful, and we provide really great care, and when you came down here… it didn't reflect the quality of care that our patients were getting.  Now we have this beautiful, bright, new space that's clean and colorful," Zimmerman said. "If we can pay attention to those details, it also shows that we're paying attention to the details in the exam room."

The new Clinic opened in October and offers care every day of the week, and between the two locations has 13 providers: 11 pediatricians, a nurse practitioner, and a physician assistant. For more information, visit http://www.childrensclinicofbillings.com.

Check out the digital edition, here!