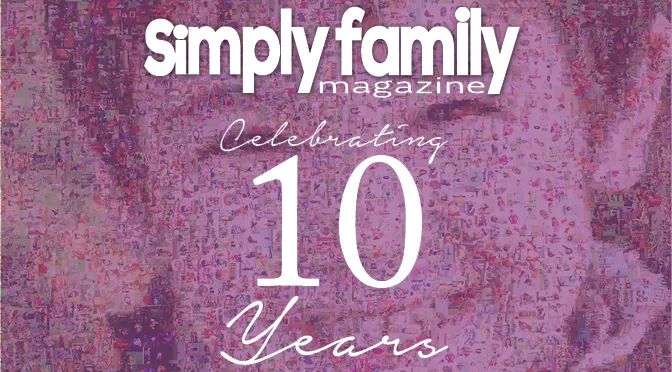 Because 10 years ago equals the 1990s in my head, I mistakenly think of a world that was on the verge of chatrooms; when cellphones were becoming increasingly more common, and smartphones weren’t even close to being a thing. In reality, 10 years ago we were nearly a decade into the 2000s. Ten years ago, two moms (ahead of the “Mompreneur” trend) were putting into motion the plans for a local publication that would support and connect families in the Yellowstone Valley. Ten years ago, this month, Simply Family Magazine made its debut. Fittingly, the magazine initially came out 10 times a year, it was in 2011 that the magazine became a monthly publication.

In the papery, less crisp pages of that first issue, readers would find must-read content about the realities of full-day kindergarten- one year in the making; tips for moms to avoid the over-commitment conundrum, along with a variety of back to school gems. But in the final pages of that issue, and every issue since, there was the local events calendar. It’s this particular piece of the puzzle that has served to connect families with this community in ever-growing ways. In those first pages of SFM, the calendar – for two months, mind you – could fit into one month, with room to spare in an issue’s calendar today. Way to grow, Billings!

It’s not just the calendar that links the reader more deeply to the community – it’s everything that comes before it, as well. It’s shining a spotlight on businesses and individuals – of all ages - that are doing outstanding things in our community, it’s offering a sense of that “it takes a village” mentality, where you know you’re not in this alone. In essence, we hope you’ve felt seen and heard within the pages throughout these 10 years. As the years have gone by, perhaps a former regular contributor said it best when she reflected to SFM co-founder, Jenny Barriger, “In the beginning it was a calendar with a few articles, and somewhere along the way it transitioned to a ‘real magazine,’ a magazine that also has a calendar.” 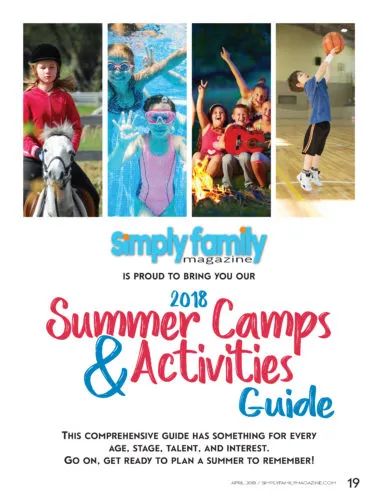 From the beginning, the goal with SFM has been to change the way parents were able to parent in our community, to give this journey of parenthood a platform. We wondered, recalls Barriger, “How can we make this easier for them? How can we compile as much information as possible in one place?” With those ideas in mind, it was in the magazine’s first year that the Camp Guide made its debut, though in its inaugural run, it appeared in the May 2009 issue. From 2010 on, however, it’s been a staple of SFM’s April issue.

In 2009, when that first Camp Guide was becoming, the idea of summer camps being planned and marketed in our area in April was a pretty foreign concept – never mind being organized into a single space. So it’s been humbling to see the way the community has worked together, going along with this vision in helping us create this parenting platform.

As did the calendar, the Camp Guide would continue to grow with each passing year, ultimately becoming the most highly anticipated issue of the year, as families eagerly planned their summers from those pages. From 14 pages and 165 camp listings in the 2010 Camp Guide to 32 pages and 325 camp options in 2018, it has paved the way for 10 glorious summers! 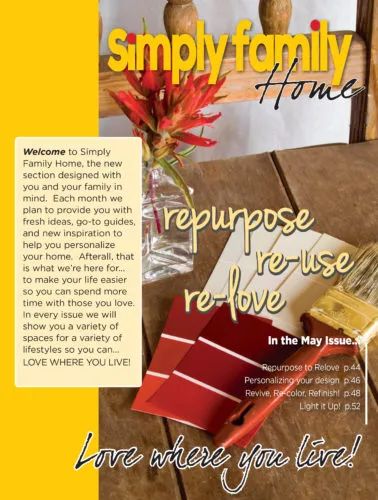 Love Where You Live

Through the years, Simply Family Magazine’s readers have not only found insight into parenting issues and community happenings, but they have experienced an incredible variety of recipes (with one comical misprint regarding anchovy paste), hands-on DIYs, and in May 2013 the “Simply Family Home” section made its first appearance. In that section, SFM has featured countless homes, families, kitchens, family gathering spots, backyards, and everything that makes home, well, home. The vision for this section grew from a desire to help families truly love where they live. To provide a space where our readers could gain inspiration for the spaces and places that mean the most to them.

And then there are the people and businesses whose support make this magazine possible. As the groundwork was being laid by co-founders Kim Nelson and Jenny Barriger in February 2008, they knew that making this dream a reality would require a partnership between magazine and local businesses. If not for the advertisers who have trusted Simply Family Magazine as a vital place to advertise their businesses, we wouldn’t exist, acknowledges Barriger. These businesses – many of them family owned and operated – are not only important to these pages, but to this community as a whole, so take the opportunity to support local, shop small business, and give back to these businesses you see in each issue of Simply Family Magazine. 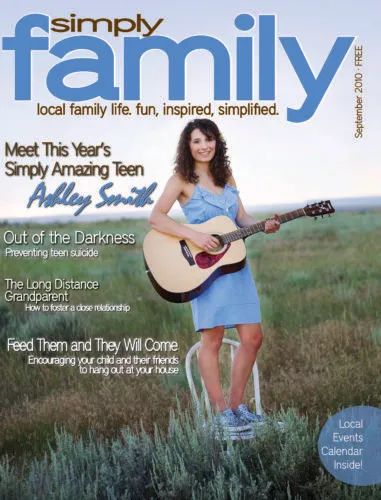 Checking in with our Simply Amazing Teens

In September 2010 Simply Family Magazine introduced its first Simply Amazing Teen, Ashley Smith, and every year since SFM has been honored to showcase outstanding teens in our community. We were able to track down and check in* with several of our former Simply Amazing Teens, and one thing was immediately clear: not only were they deserving of the title then, but whatever it was that made them shine as seniors in high school has only accelerated in the years since.

*Responses have been edited for length and clarity. 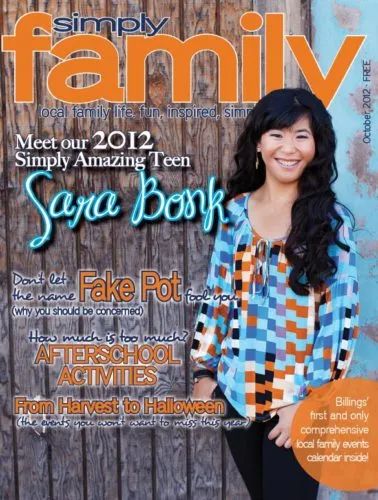 From a traveling, on-the-go teen with exciting aspirations, Sara Bonk has seen the dreams she imagined at 17 come to life during these five years post-high school.

A lot has happened for me over these last 5 years. I've finished my Bachelor of Science in Secondary Education in English Literature from New Mexico State University and have studied abroad four times (twice in Spain, Munich, Germany and San Ignacio, Belize). I'm currently teaching English as a Foreign Language in southwest Poland and was recently granted a Fulbright to teach English in Grado, Asturias, Spain for nine months starting in September. 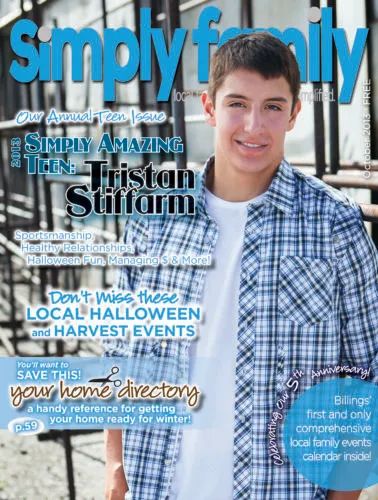 When Tristan Stiffarm appeared in the pages of SFM as the 2013 Simply Amazing Teen, he was still waiting to learn if his goal of attending West Point would become a reality. The confidence his high school principal, Deb Black, had in him was clearly spot on.

In the past five years since I graduated from Skyview High School, where I was involved in football, track, NHS, Key Club, and All-Nations Club, I’ve attended and graduated from the United States Military Academy at West Point where I majored in Chemical Engineering. There I was involved in the Chemical Engineering Club, AIChE, and worked with my company's Sandhurst team. Sportswise, I played on the rugby team but injuries limited my participation to my freshman year. After graduation, I commissioned as a Second Lieutenant in the United States Army Infantry. I am currently attending IBOLC at Ft. Benning, GA, and will later attend Ranger School, SLC, and Airborne School. After my training I will be stationed with 1-25IN at Ft. Wainwright, AK.

Doctors in the Making

The 2014 and 2016 Simply Amazing Teens, having both overcome unique obstacles, had aspirations to careers in medicine, though their respective ideas on their chosen specialties might see an occasional shift as they work through their undergraduate programs, the ultimate goal remains the same… 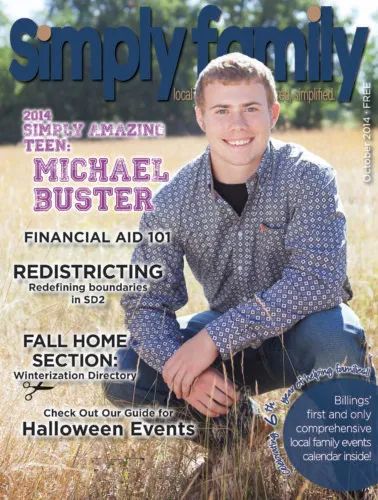 After graduating from Laurel High School in 2015, I’ve been attending the University of Mary in Bismark, ND in the pre-med program, double majoring in Biology and Chemistry, where I was on the Dean's List this last semester with a GPA of 3.567, as well as playing football for the UMary Marauders. I’m on track to graduate December 2019, and will begin studying for my MCAT’s this fall and spring. I plan to specialize in pediatrics or sports medicine, rather than cardiovascular surgery.

Throughout college, I’ve opted to not have a sign language interpreter, rather I use a closed-captioning program to aide me in the classroom, while my teammates and coaches use signs on the field.

In 2017 I was asked to be one of the speakers for UMary TEDX, the theme was Against the Grain (people who go beyond the norm of the local region), presenting about hearing the world and living the life of a deaf person. Then, this past spring, I was asked to speak to the Speech Pathologist class to discuss how I learned to talk and read, and how I’ve overcome obstacles with my hearing. 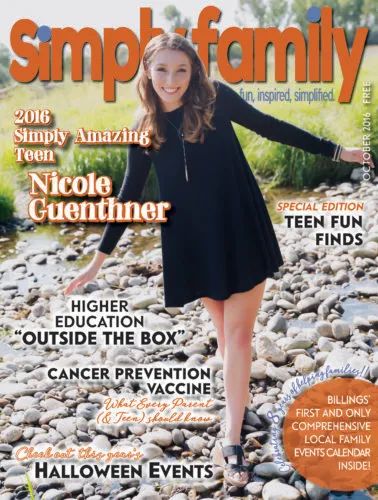 I graduated high school as a valedictorian of Skyview in 2017 and was accepted into Washington University in St. Louis (WashU), which is a research institution consistently ranked within the top 20 best universities in the country. I sent the Simply Family article along with my application for admission, and I am sure it was an important part of how I got accepted into my dream university! I am majoring in Biochemistry & Molecular Biology and minoring in Psychological & Brain Sciences. I have been placed on the Dean's List both semesters and continue to maintain a 4.0 GPA. It's my goal to graduate with Latin Honors. I hope to continue my studies at the graduate level and obtain a PhD at some point. I eventually want to study oncology with the hopes of developing new treatments for cancer patients. I'm really excited that I will begin working in an oncology lab this fall, meaning I get an early start on my future career!

In addition to academics, I have found myself involved with several extracurriculars. Last year, I was on the steering committee of WashU's Relay for Life and participated in a selective leadership program on campus called the Emerging Leaders Program. I have also been accepted into a few scholarship programs for cancer survivors, including programs through Cancer for College and the National Children's Cancer Society. These programs have given me many chances to share my story with others and to listen to many inspiring stories of other cancer survivors.

Finally, I will be 5 years cancer-free this October!

Fresh Out of the Gates 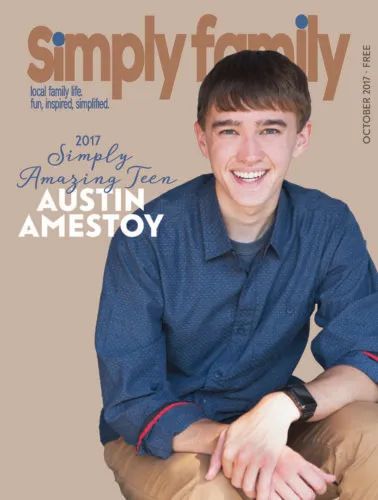 Our reigning Simply Amazing Teen has had an active summer working, traveling, planning, and preparing for life in college.

After graduating as valedictorian of Laurel High School this spring, I plan on attending MSU Bozeman this fall, majoring in Film and Photography, concentrating on motion-picture filmmaking. I’ve always loved movies and the art behind them, though I’m not so sure just yet I’ll be making them for a career. It’s just a good jumping-off point for me to begin discovering what I’m really meant to do!

Some scholarships I applied for won me amazing trips. My audio essay for the VFW’s “Voice of Democracy” scholarship contest won at the Montana State level, taking 19th at Nationals and earning me an opportunity to meet the winners from all other 50 states, Puerto Rico, Europe, and the Pacific Areas in Washington D.C. Additionally, my government class won at the state level for the “We the People” competition, and were regional champions at the national level.

I applied for many scholarships to help pay for college, and am happy to say that a decent chunk of my first year of college is paid for! Some I received include the Yellowstone Valley Electric Cooperative Scholarship, the "Burger King Scholar” scholarship, a scholarship from the VFW Voice of Democracy contest, the Daughters of the American Revolution “Good Citizen” scholarship, and the Laurel Unified Educators Association scholarship.

By far my proudest achievement, however, was receiving a Montana University System Honor Scholarship, which will pay for my college tuition for four years! I am so excited to see what the future holds.