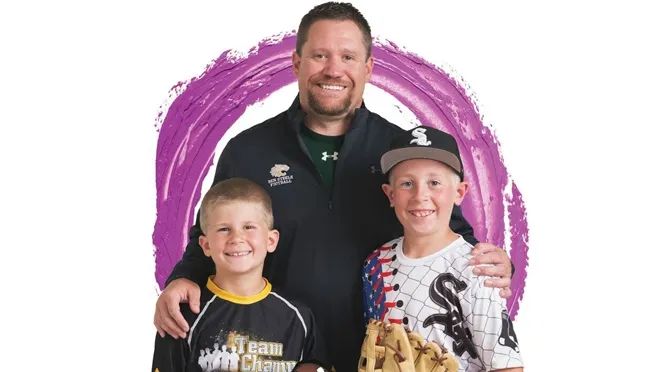 There was a time when club sports and travel ball were not the norm, when only a handful of sports (and youth) were in on the trend. Nowadays, there are club/travel teams for virtually every sport (at all ages), and participation is deemed a virtual necessity if you want to make the school team. The "What if" factor and FOMO (fear of missing out) undoubtedly play a significant role for the athletes. What if I don’t play club in the off-season? Will someone edge me out of my spot? The hope, of course, is that it ultimately goes back to one thing for the kids: the love of the game.

On the other side of the equation where the coaches live, the obligation to play club or travel ball in the off-season is strongly implied, if not outright spoken by the coaches. It’s generally recognized as an essential measure to ensure success– if you want your kids to be competitive in season, they’ve got to put in the extra work in the off-season. Where open gym and camps once reigned supreme, club and travel ball have taken over. The concern with year-round play in a single sport, however, is that it’s creating a push for kids to specialize far too early, which can lead to burnout or overuse injuries.

And then there are the parents. The ones who are doing all the transporting, footing the bill, cheering in the stands - sometimes coaching - all while seeking to help their child find a balance. For the parents (and the athletes) it’s essential that they’re both clear about their expectations and actively managing those expectations. If you're looking for club ball to offer a return on your investment (so to speak) by way of a college scholarship, then you might want to keep these figures in mind:

So let’s say it’s not an impossibility, but it's not a probability either.

For the moment, let's take the idea of athletic scholarships off the table, and look, big picture, at what club sports/travel ball has to offer. We'll talk about what it really means for parents to manage their expectations and navigate this side of their child’s athletic experience. 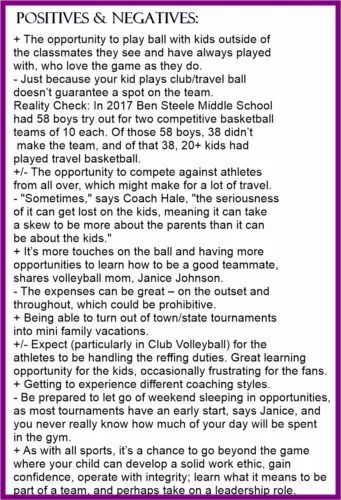 It’s incredible/mind-boggling when you think of all the opportunities there are for kids to play sports. It starts in the rec leagues when they are tiny little peanuts, exposing them to the game, and then grows to more competitive leagues long before they hit the age of school-based extracurriculars. With a buffet of options to choose from, it’s ideal to let kids try all of the things when they’re little, so that by the time they’re hitting their stride in middle school, heading into high school they can make an informed move towards specializing. However, Sean Hale, dad of two active boys and head football and wrestling coach at Ben Steele Middle School encourages kids to “play as many sports as they can, through being seniors in high school.” He goes on to say, “I don’t think they should just focus on one sport and train year-round for it, as I see some kids doing by the time they’re in 5th grade.”

First, let’s get this out of the way: It’s important to remember that playing club/travel ball is not a guarantee that your kid will be a starter or even make their high school team. Nor is the door closed on those who don’t/aren’t able to participate in club/travel ball.

Before choosing to commit to playing club, consider these things:

Be realistic and real with yourselves when considering what your expectations are; remember, it’s supposed to be fun.

As you embark on this journey of club ball, Coach Hale recommends families take into consideration the people you’re signing up to play with. He says, “Make sure it's a quality group of kids that all get along and are positive influences on each other…Make sure the coach is focused on the skill and sports development a lot more than just winning a trophy on the weekend."

Softball mom, Kara Thomae, shares that it’s not only the camaraderie between her daughter and her teammates but among the parents as well. Go all in, parents, make the signs, do the bonding; it makes for one winning experience. Adding to that sentiment, volleyball mom, Janice Johnson, says that it takes a team effort from the parents as well, so be willing to help each other out, but above all, “Remember it’s just a sport – anyone can be guilty of forgetting that it’s supposed to be fun.”

Our role, parents, is to support the coach and the kids. Explains Coach Hale, “If that means umping, prepping the field, helping run drills…Make sure you have a defined line of how much you are or are not going to do, and let the coaches coach. If you have issues, talk to the coach 1:1.”

Ultimately, it’s our job as parents not to let our kids get lost in the machine – their playing shouldn’t be more important to us than it is to them. It’s up to us to help them find a balanced approach.

“Becoming an athlete is not a sprint, it’s a marathon.

So every experience is a teachable moment.”

-From The Truth About Sports Parents… by I <3 to Watch You Play.com