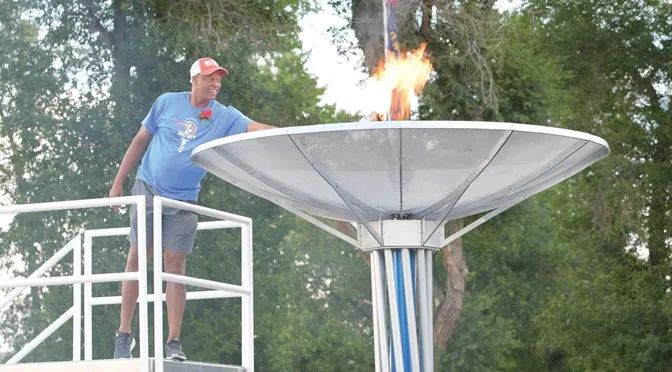 A look inside the Big Sky State Games

Every July, athletes across Montana prepare for the big event- The Big Sky State Games- and this year is no different! As the “Father of the Modern Olympics” Pierre du Courbetin put it: “The most important thing in the Olympic Games is not winning but taking part; the essential thing in life is not conquering but fighting well.” Though many athletes aspire to win the gold medal, it is the challenge, comradery, and community-building that keeps them coming back.

Tom Osborne started the Big Sky State Games in 1986, inspired by the 1978 New York National Empire Games. According to their website, “The Big Sky State Games is an Olympic-style amateur sports festival for people of all ages and abilities who reside in the great state of Montana… The Games are a member of the National Congress of State Games, and recognized by the United States Olympic Committee.” Initially, there were 12 sports to participate in. Today, our Games boasts the “largest state games per capita” in the nation, with 36 sports and thousands of participants each year. Many people from North Dakota, South Dakota, Idaho, and Wyoming join the citizens of Montana to compete annually. And when they say the event is for “all ages” they really mean it, as I learned after visiting with Karen Sanford Gall, the Executive Director of the Big Sky State Games. “We have had kids in dance as young as 2, and we had one competitor who was over 100 years old! There is NO age limit!”

Over the years, the Games have really "grown in purpose" and expanded, Karen explained. Originally, the games focused on very competitive, physical sports; while those events (such as basketball and volleyball) are still hugely popular, there are more events than ever this year. Karen credited that to more people caring about and promoting a "healthy lifestyle." It has evolved into a family event. Spectators are encouraged! "It really does bring families together," or at least, allows for a little friendly competition!

This year’s Opening Ceremonies will be held on Friday, July 20 at Wendy’s Field (gates open at 5:30 p.m.). This family-friendly event allows for athletes and their families to gather around in anticipation of what is to come over the course of the weekend. It is also a great, encouraging event for the younger generations. Let your kids “dream big," as they watch the Parade of Athletes and former Olympians lead the Torch Lighting. This year’s guest speaker and Torch Lighter will be the talented Tonie Campbell (American Olympic Hurdler and 1988 bronze medal recipient).

Another highly anticipated facet of the Opening Ceremonies is the captivating one-mile race. Some of the top track runners in our state will compete in the Montana Mile. Well-known high school and college athletes, such as former Billings standout, Christina Aragon, have been known to compete. It is a fantastic way to cheer on our youth, and you never know, it just might be history in the making!

And on the plus side, the weather should be good. According to Karen, the Games are always the third week in July because the founder referred to the Farmers’ Almanac for the driest weekend of the year. If you’ve been a part of the Games, you know how scorching hot those July days can be. That is why, as an added event, and keeping with the theme of family involvement, the community is invited to participate in the “Soaked Fun Run.” It is described on their website:

Come join us in a non-timed, two-mile, crazy fun water walk/run around and through Pioneer Park. All ages, slow or fast, are encouraged to participate. Be prepared to run through foam stations, slip and slide down the hill, jump through sprinklers, and dodge water guns in this fun-filled race. The Soaked Run starts at 6:00 p.m. and the Ceremonies start at 7 p.m.

If you are new to the Big Sky State Games, make sure to refer to their website: www.bigskygames.org to see a full list of sporting events and registration information. REGISTRATION ENDS JULY 5!

Some of the more popular events are still the team sports such as basketball, volleyball, soccer, and flag football. However, dance (both stage and ballroom) has grown over the years. Also, there are many individual sporting events such as swimming, shooting, and disc golf. And other out of the spotlight events you may want to join or cheer on such as fencing, bowling, pickleball, and many others. "You name it, we pretty much have it," quipped Karen. It’s a “Sports Melting Pot” and competitors look forward to connecting with friends during this weekend every year, adding, “It’s like a family reunion in the sports world."

Volunteers and the Community-

The event is volunteer-driven, and Karen acknowledged that the Games could not be possible without the help of the many wonderful returning volunteers and sponsors each year. If you are interested in volunteering, refer to the website for more details.

Also, even if you’re not a competitor or don’t know anyone competing, check it out anyway! Visit the Opening Ceremonies and Games this year and join in the fun (July 20th-22nd)! You never know, you may find the motivation to participate in an event next year!

The Big Sky States Games have boosted our Billings morale, fitness level, and economy by bringing in thousands of athletes for a worthy show of strength, coordination, technique, and more! Karen shared, “ give people a goal to shoot for—and make life interesting!”. Be prepared to learn a valuable life lesson as well. As you watch the challenging events, you may, in turn, want to push yourself further than you think you can. Most importantly, Karen added, “Just get off your couch and get moving.” So even if you’re not going to be a gold medalist this year, you can still be inspired by the athletes’ determination and get involved in this FUN-FILLED weekend by volunteering or cheering from the stands!

What are you waiting for?