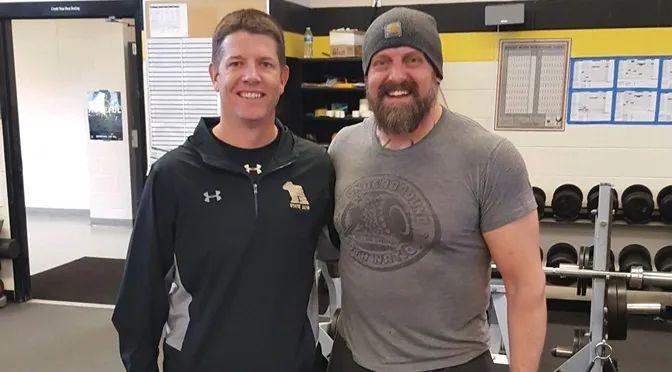 Jim Thompson’s wake-up call came with four minutes to live. The bodybuilding and weight-lifting champion had gone to the emergency room on Groundhog's Day, 2004 with severe abdominal pain. He'd been feeling sick most of the day and thought he might have food poisoning. But what doctors found would forever change the course of Thompson's life.

Growing up on a ranch, Thompson was physically fit as a teenager but needed to gain weight in high school to play basketball. He turned to weight training, and it quickly became a passion. He started competing in bodybuilding shows, and that eventually took him down a darker path. In that community, he quickly learned that steroid use was the norm. "I figured that if I'm going to compete, I better do what everybody else is doing and that just kind of led into it," Thompson said.

Thompson transitioned from bodybuilding into powerlifting and continued to rely on steroids to help him collect awards. He took third place in the world competition in 2003, but it would all come to a crashing halt the following year.

A softball-sized tumor, fed by steroid use,  had been quietly growing on his liver. Doctors believed blood had been seeping out for six months, feeding a basketball-sized hematoma surrounding his liver. When they opened him to remove the tumor, blood was gushing out from all of the built-up pressure, and doctors later told him, he was about four minutes away from dying. Eighteen units of blood and ten minutes later, physicians got him stabilized, and eventually removed ten percent of his liver.

His long-time friend Mark Johnston came to see him in the hospital. “He was as close to death as a person could be without being dead. It was bad, really shocking,” he said.

While Thompson was recovering, he was told that he would never lift again. But Thompson is not the kind of guy to back down from a challenge. “If people tell me I can’t do something, that will make me want to try to do it,” he laughed.

He quit steroids cold turkey, hit the gym, and got right back to winning… without steroids. “I didn’t want to be the guy who just says, ‘You can do it without it.’ I wanted to prove that I could do it without it,” he said. And he did. After his surgery, he set several national records. For his fiftieth birthday in February, just over 14 years since his terrifying ordeal, he did 500 deadlifts of 315 pounds in two hours and five minutes.

“It’s a privilege to be able to work out, and there are days when I don’t want to, but it always comes back to being told I would never be able to do this again, that I was done and that it was all over,” Thompson said. “They told me to hang my trophies on the wall and look at them because that’s all I would be able to do. I find that every single time I can lift or even work out, that’s a privilege.”

Today, Thompson owns and operates Cornerstone Fitness and is doing everything he can to steer people away from making the same mistakes he did. Once a week, he goes to the jail to encourage those serving time to get their lives on the right track through a program called Power of Abundant Recovery, a program based on Christian beliefs. He does fitness challenges with his trainees to help raise money for the Courage Foundation, which supports veterans with post-traumatic stress. And he regularly speaks to athletes in schools.

Johnston works for the Billings Clinic as a sports medicine associate at West High School, and he and Thompson have teamed up over the years to teach students how to achieve their fitness goals the right way. They help students come up with workout plans and food diaries and give them a push when needed. 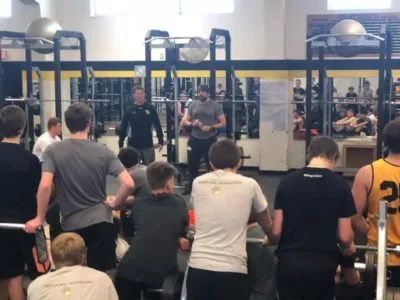 They emphasize proper exercise technique and maintaining adequate nutrition, with the goal of getting as many students exposed to the right type of strength and conditioning to help prevent injury. This year's graduating class is the first to have been with Johnston since their freshmen year, and the majority of those athletes have been with Johnston their entire four years. "Our ACL tears are down over the years, and it could be luck, but we like to say that we're seeing lower numbers of injury because of our success," Johnston said.

The two work hard to emphasize students don't need much to achieve their fitness goals. Eating well, proper technique, and an individual's dedication are what drives results. "You can have the best programming in the world and the fanciest equipment, but if they aren't doing it right, it doesn't mean anything," Johnston said.

Getting students to buy into the plan can be tricky, they say, because, in their experience, most teenagers don't plan well enough to bring a protein shake for their locker or pack a nutritious lunch. And if they're hungry all the time, as most growing adolescents are, they'll eat whatever is in front of them.

With access to resources from the Billings Clinic, Johnston has made a concerted effort to bring in a registered dietician to help young athletes see the connection between healthy eating habits and physical fitness. He says, most kids are undernourished and don't eat well; he points to the variety of convenience stores and pizza places within walking distance of high schools. So Johnston makes a point to talk to the students about getting enough calories from the right sources.

And while it can be tough to help a high school student maintain the discipline needed to succeed, they say it’s incredibly rewarding when they do stick to the plans.

Thompson trains a handful of high school students at Cornerstone Fitness; his clients range in age from 9 to 85, but the reward is the same. “I love to rehab people and get them from A to B, that’s my motivation,” he said. “Setting goals and reaching them, you’ll learn a lot about yourself. Asking, how am I going to get to this goal? We just develop a plan, and it’s just like flying an airplane, you plan the flight, you fly the plane, and it happens.”

Both Johnston and Thompson say that it's unusual for high school students to be interested in steroids; it's college athletes who are more apt to turn to illegal enhancements. They say high school students are more interested in nutrition supplements, but Johnston and Thompson are aware of potential dangers and are committed to laying the groundwork for healthy habits at a young age, with the ultimate goal of keeping athletes clean and drug-free.

“When I was using steroids, my whole life was kind of a black hole,” Thompson said. People around him, including Johnston, would ask if he was on steroids, and he always denied it. He knew the legal ramifications, and he knew what it would do to his family if he got caught.

For 15 years, he kept his secret from even his wife and close friends like Johnston.

He recalls sitting in the bathroom before that fateful day in the emergency room, sticking a needle into a half-football sized injection site on his leg, and pulling out blood and pus, but the infection never cleared up. When his surgery blew his secret apart, doctors got him on antibiotics right away. "Thank God I got sick because I probably would have lost my leg. It all definitely happened for a reason," he said. "I think it was God's way of saying, ‘You need to be done with this.'"

Today, Thompson is not shy about sharing his former life if it helps steer others away from the detour his life took. “For fifteen years, I was living a lie all that time, this big black hole,” he said. “I was able to say yeah, I did take those. And it was so liberating to be able to say that.”