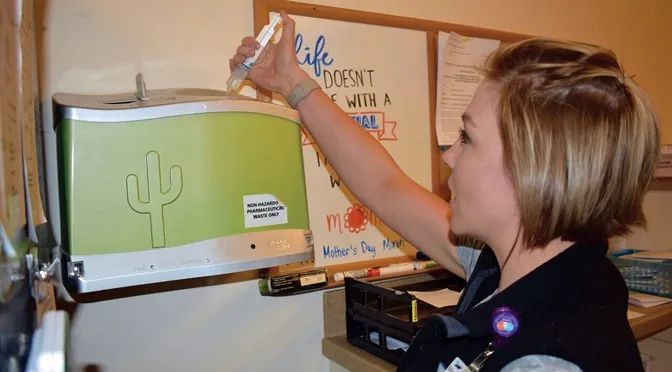 The deadliest drug crisis in national history is on a rampage. In 2016, 64,000 lives were lost to drug overdoses, making it the leading cause of death for Americans under the age of 50. Experts say opioids are fueling the spiking numbers, and Montana has not been immune. Opioid use is the primary driver of drug overdose deaths in the Treasure State, with 44 percent of deaths related to opioids.

In a one-year period starting in July 2016, the Billings Clinic emergency room had 567 opioid addiction-related visits, or roughly two visits every three days.

“We didn’t find ourselves in this position overnight,” said Barbara Schneeman, vice president of communication and public affairs for Riverstone Health. She traces the problem back to 2001 when the Joint Commission on Accreditation of Hospitals began to label pain as the fifth vital sign. During a doctor appointment, a nurse will check vital signs, including temperature, pulse, blood pressure, respiration, and now, patients are asked to rate pain if they’re experiencing it. "That really led to a surge in opioid prescriptions and an increase in overdoses and deaths tied to painkillers."

Opioids are powerful drugs that interact with pain receptors in the human body to alleviate discomfort while increasing feelings of pleasure. When used under a doctor’s care, they are an essential tool, particularly for surgery, but they can also be highly addictive. If taken outside the parameters of a physician’s direction, they can be fatal.

RiverstoneHealth, St. Vincent Healthcare, and Billings Clinic are working on multiple angles of the crisis in Yellowstone County. Last year, Montana’s Department of Health and Human Services compiled a substance abuse strategic task force to specifically look at addressing substance abuse disorder and outlined six different action areas and strategies. The goal is to tackle the epidemic through prevention and education, law enforcement, prescription drug monitoring, and supporting families and communities to ensure individuals have access to help.

“It will take all of us working collectively to bring our best resources and knowledge to bear on this problem,” Schneeman said.

Doctors and pharmacists are working on everything from monitoring and reducing the number of opioid prescriptions written, to how to handle leftover medication.

Kyle Townsend, director of pharmacy services at the Billings Clinic, says there is a nationwide push to look into alternative ways to treat pain, including scheduled Tylenol and non-steroidal anti-inflammatories. Healthcare providers are also taking a more holistic approach by relying more on heat, cold, acupuncture, patient positioning, and physical therapy.

The Billings Clinic is part of the Mayo Clinical Care Network, which offers greater access to specialized resources and expertise. The Mayo Clinic recently announced advances in reducing prescription opioid use. This year, a collaborative of ten hospitals nationwide, including the Billings Clinic, is looking to not only piggyback on Mayo Clinic's success but also discuss new ways to address the challenges.

Disposing of prescriptions properly is an important step in controlling what is out in public, but it can be tricky, given the high street value and appeal to burglars who are quick to raid their victim’s medicine cabinets. Billings Clinic offers a consumer take-back program for unused medications, and will soon have a safe installed near the entrance for convenient drop-offs.

"Patients typically have leftover opioids, and this would allow them to get rid of them," Townsend said. The Clinic had to go through a rigorous process to obtain the safe and is registered with the Drug Enforcement Administration as an authorized disposal site. The safe has a two-lock system, requiring two people to open it. Once the safe is open, drugs are placed into a zippered bag with bar-code ties, and the bag is sent to the DEA for disposal through an authorized vendor.

A relatively new approach is to render old medications inert with a Cactus Smart Sink System, which captures the drugs and makes them unusable and non-retrievable. The Billings Clinic has been using such a system for large quantities in the inpatient setting for the past few years and has a similar, smaller technique for the outpatient setting.

Townsend points out another important measure that is helping curb abuse. "Our pharmacy has an unwritten rule that we won't fill the pain medication without the antibiotic that goes with it. If they have an antibiotic and pain medication, and they come in and ask just to fill the pain med, obviously you know that's a concern because the antibiotic is what's going to take the infection away too," he said, adding that pharmacists are constantly vigilant and don't hesitate to call the provider with concerns.

Healthcare providers are also taking advantage of a statewide prescription drug registry to prevent people from getting multiple prescriptions from a variety of doctors, known as doctor-shopping, but more work needs to be done to include providers in surrounding states.

Addressing drug use is a bit of a cat-and-mouse game. Stacy Zinn-Brittain, group supervisor for the Billings Tactical Diversion Squad of the DEA, said the opioid problem has been growing for some time in the Billings area. Last year, it shifted to include heroin and now, the highly potent synthetic opioid fentanyl, which is 50 times more powerful than heroin, and drug users are mixing them, creating a new scenario that is even more difficult to address.

“What’s scary is seeing younger adults utilizing harsher, harder type drugs. That to me is eye-opening,” Zinn-Brittain said. She said pill parties are a reality here in Montana; participants will raid the medicine cabinets of their parents or grandparents, dump the pills into a bowl, mix them up, and take one to see how they react, sometimes while being filmed.

She said she has been shocked to see the scale of Montana’s drug problem, particularly among young people. “If we’re not careful, we’re going to lose a generation, not just in Billings, but nationwide,” she said.

The Rimrock Foundation is working to improve access to care but is facing Department of Health and Human Services budget cuts and outdated federal regulations that thwart some of their efforts. Malcolm Horn, director of Special Services for Rimrock Foundation, says that while she understands budget cuts, the ripple effect of untreated addiction costs more in the long run, and society pays the price for incarceration, criminal justice, Medicaid, hospital debt, and a host of other problems related to drug use.

“If we would just do early intervention, if we would do education and treatment before it got to be a crisis, we would save money,” Horn said. It would also be better for patient health overall.

She echoes Zinn-Brittain’s concerns about mixing drugs, pointing out that opioid withdrawal alone is difficult. But when powerful drugs like heroin and fentanyl are in the mix, managing withdrawal is even more challenging. “One of the reasons people will relapse is because the withdrawal from opiates is, say, take the worst flu you’ve ever had and have it for two or three weeks. It’s that miserable. So they’ll often go back to using because the withdrawal is so horrible,” Horn said, adding that many people avoid treatment because they’re terrified of how they’re going to feel. But Horn stressed that treatment works, and encourages parents to be diligent about talking to their kids early about the dangers of drugs.

"Patients need to know, and kids need to know they can reach out to get help, that they don't have to do this alone," Horn said. "I don't think anybody debates anymore that we have an opioid crisis, that we have a methamphetamine problem, we know that. Now we actually need to address and treat it, and what we know is that early intervention works."