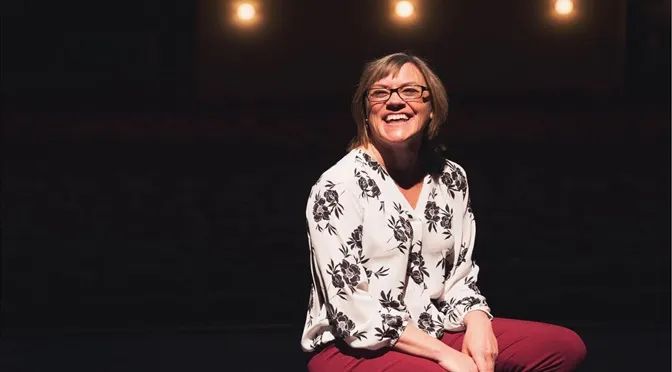 Behind the Scenes with ABT's Jody Grant

“I am inspired by unsung heroes, the people who every day decide to lead with love and engage fully with what they’re doing at that given moment.”

As we see the names of everything from Broadway touring productions and breathtaking ballets to Grammy Award-winning artists to local dance groups and performers filling the marquees of Alberta Bair Theater - later watching those performances on the stage - we rarely think of everything happening behind the scenes. The trucks unloading in the wee hours in less than desirable conditions, the people it takes to bring these incredible shows to Billings. In truth, we don’t have to know, says ABT’s Programming and Marketing Director, Jody Grant; our task is to show up and be dazzled.

Simply Family Magazine recently had the opportunity to go on-stage at ABT for a preview of the upcoming season. As we watched the program that Jody and her team had prepared for local media and listened to her talk about some of the upcoming performances, we were struck by Jody’s passion for her work and this gem of a local theater. Reluctant to have the spotlight shine on her alone (she’s quick to point to the incredible team of people who are making things happen at ABT behind the scenes – including Jan Dietrich, ABT’s Executive Director who is also spearheading an ambitious capital campaign that will see the theater through its latest renovation), Jody allowed us to pull back the curtain and learn more about her and her love of this theater and the shows that have graced its stage.

Getting to know Jody

Though born and raised in Billings, experiencing other places has been a reoccurring theme in Jody’s adult life. First, completing her undergrad 80 miles northwest of NYC at the State University of New York, College at New Paltz. Following which she traveled extensively, earning a certificate to teach English as a second language, spending a year teaching in Japan, followed by a year in the Czech Republic. She and her, now, ex-husband would go on to make Seattle their home, with their oldest daughter being born there, but family drew them back to Billings in 2001, giving their children the opportunity to know their grandparents. Travel continues to play an important role in their lives with recent trips to France, Alaska, Australia, and closer to home – Flathead Lake.

Making a move to Alberta Bair Theater as marketing director stemmed from an already established working relationship with ABT. Previously the marketing director for Billings Symphony, Jody had worked with the ABT staff for years, and when her predecessor left to pursue other opportunities, she got the call to interview. It was after ABT’s former executive director left to seek opportunities closer to his wife’s family that “Programming Director” was added to her title.

When asked what the theater means to her, Jody had this to say:

Beyond high-quality entertainment, the theater creates opportunities to improve outcomes in mental health, education, economic development. Live entertainment creates a give and take energy from the artists performing and the audience. That human connection and sharing of ideas is something we fundamentally need to lead a healthier life.

Finally, we asked the unthinkable: does she have a favorite show/performance? From previous performances, she was able to pinpoint A.J. Croce and his band, whose “depth of talent” blew her away. She also notes that Steep Canyon Ranger was another band whose “sheer musicality was a joy to witness and dance with.” Looking to the upcoming season, she’s looking forward to Kinky Boots. Jody says, “The way I left the theater when I was in New York City made me feel love CAN conquer the world. People CAN open their hearts and minds.”