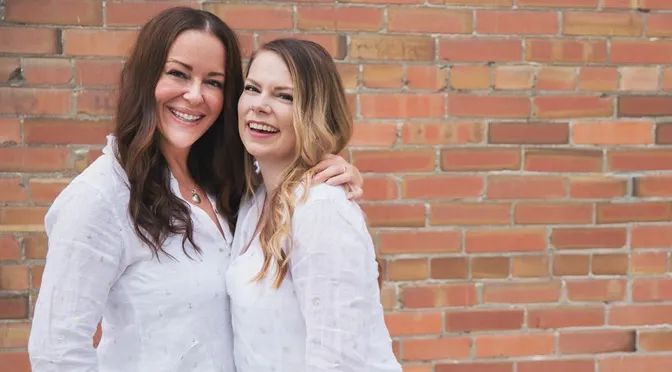 Blend. Commingle. Merge. Fuse. The list of words describing the process of mixing one thing with another until they combine could go on and on. For one Billings family, this concept has come to mean more than just a concoction of substance - it has become a way of life. Sarah Hinkle and Kelsey Hutson are the masterminds behind a brand new salon set to open this summer, but their lives are also connected outside of the beauty industry. Kelsey is now married to Sarah's ex-husband, and between the two families, they are raising three children in an unconventional yet inspiring way.

Divorce and the term "blended family" can bring to mind a picture of strife and struggle, with children bounced between homes. Schedules and lives are often orchestrated by cordial, yet disconnected relationships between current and past spouses. For Sarah and Kelsey, however, opening a new business together feels almost like an extension of another joint venture they have already conquered; successfully navigating the waters of parenting side by side. Sarah says, "A new business is no different than raising a baby, and it helps that we have been raising three at an optimal and unified level for years." Kelsey agrees that parenting is difficult, but appreciates the firm foundation of good communication and a willingness to compromise for the greater good that the two families have already established. With the end goal of a healthy and stable environment for their children in mind, Sarah and Kelsey have stepped into entrepreneurship with the same mentality that has served them so well thus far in raising babies. Empowerment for each other in the face of adversity, and a deep-seated belief that they are ultimately responsible for the environment they create.

Although their families felt whole, the women noticed a missing piece in their beauty routines within their respective communities. Kelsey (who lives in Casper, WY) and Sarah (who resides in Billings) grew frustrated with the long wait times for appointments and high prices for waxing services that didn't fit into their busy lives as moms and working women. They agreed that they needed something faster, more affordable, and more accessible. They also knew that for all of the many thriving salons in town, none were exclusively offering body and facial waxing. The vision for STRIP Waxing Salon was born, and the two women began to dr

eam of a place where luxury, exclusivity, and affordability could combine to make an often unpleasant experience a little more enjoyable. Plans to launch the business were made, and a highly desirable location was secured at Shiloh Crossing a few doors down from ULTA! Specializing in body waxing, brow design, and tinting services, STRIP aims to offer exceptional customer service along with unparalleled skill when it comes to hair removal. Drawing from the philosophy that undergirds their personal relationship “teamwork makes the dream work" Sarah and Kelsey also imagine a business model that gives back to the community through philanthropy and team empowerment. The "girl power" vibe is strong, as Kelsey (a cosmetologist) plans to drive the industry side, while Sarah manages customer service and runs the administrative end of the business.

Though the challenges of opening a new business may be many, Sarah and Kelsey agree that achieving success together in the toughest job (parenting and co-parenting) has likely brought them through every hurdle that entrepreneurship may present. In business, as in life, these two women have reached an enviable level of mutual respect and admiration by keeping their focus on the future example they are setting for their children. Instead of struggling against the ways they might differ in parenting styles or backgrounds, they have made a conscious effort to choose to create an environment that radiates love and support not only for their children but also for each other. Sarah says, “Whether it’s loading up the kids to visit each other from hours away, taking holidays together, or celebrating a lost tooth via Skype, our kids know that we are on the same team.” Giving their families the gift of having each parent fully invested in their well-being, Sarah and Kelsey are standing strong against the potentially negative effects of divorce and separation. Statistics show that around 70% of people who are divorced will eventually remarry at some point in their lives, and the likelihood of blending not only lives but also children is strong. Sarah and Kelsey offer hard-earned advice from their journey to other families who may be trying to combine his and hers successfully. They say, "We are a rare, but rewarding, circumstance. Being a successful blended family is a choice. It is, very simply, the decision made by all to put your individual insecurities, desire for control, and even your own hurt from the past relationship aside. It isn't possible unless everyone is on board, and cannot be done with any other motive other than to provide the best possible environment for support and healing in a tough situation." That sounds like a gift that no amount of society's preconceived notions of blended families can ever STRIP away.