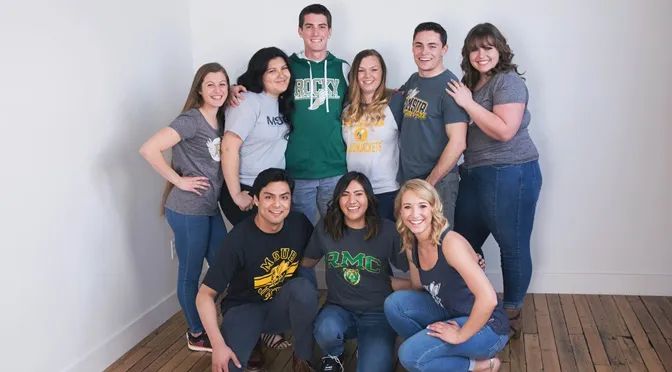 Going 'away' to college at home

Often when our kids start dreaming the college dream (I mean really dreaming, not the imaginings of their 9 year old selves when they swore they were going to live with us forever), they envision going away. Far, far away. Or, at the very least, to a different zip code than the one they’ve been calling home; soaking in those college-life experiences they’ve grown up seeing on the big screen. So, when “going away” to college ends up being in their hometown, it might not jive with their original imaginings, but that doesn't mean they can't have the college experience they had always pictured.

We chatted with Dean of Enrollment Services at Rocky Mountain College, Austin Mapston, and Vice Chancellor of Student Affairs at Montana State University-Billings, Dr. Joe Oravecz, to get an idea of what it might look like for a student who chooses to stay local for their post-high school education, and how students can (should?) engage in an immersive collegiate experience in their own backyard. 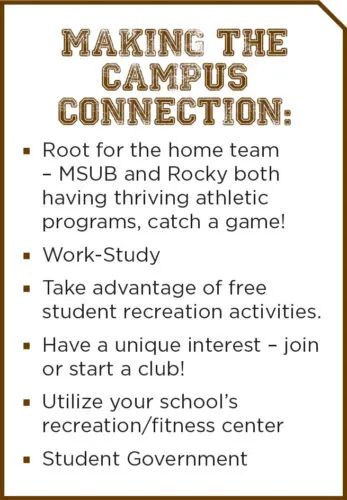 One of the benefits of attending college locally is the familiarity. You already know the community, familiar faces probably abound around campus, the safety net of having “your people” Right There is appealing. So, it can be easy, both Mapston and Dr. Oravecz say, to not allow oneself to engage in college fully – to simply attend college versus experience it.

Signs that your child might be “attending” instead of “experiencing” college:

Obviously we attend college to learn, explore new ideas, and ultimately gain a degree or certificate, but as Dr. Oravecz says, “It’s not just about the education, it is how the education leads to understanding in implementing inside-the-classroom to outside-of-the classroom, which comes involved with the co-curricular activities and becoming engaged with the University.”

In discussing the parents’ role in preparing for and sending off their young adult to college, Dr. Oravecz shares that he emphasizes to parents that they’re not “Letting go, you will never let go of your child.” Rather, he prefers the term, “Launching. That you’re launching your child into the next chapter of their life.” Which begs the question: How are you preparing for that launch? How are you preparing your child for that?

If your child is living at home, perhaps some of the expectations are:

Ultimately, as far as “House Rules” go, each family has to figure that out together. However, we fully support you in invoking the “As an adult human being there are simple, common courtesy rules to follow” e.g., calling if you're going to be later than usual, picking up after yourself…Which goes hand-in-hand with this timeless gem: “If you want to be treated like an adult, act like one.”

If your child is living in the residential halls:

In the end, it doesn’t matter if your child is attending school locally and living at home or living in the dorm, or attending school in another state, explains Mapston, because “That familial connection and support is important, and we are as close as we need to be, regardless of distance. Everyone is a phone call away.” Local students have the benefit of maintaining those Sunday family dinners, but they’re also able to help bridge a familial gap for students from further away. Both Mapston and Dr. Oravecz note the benefit of local students “adopting” out-of-area students and bringing them home for the holidays or those family meals. Mapston adds, “We try to provide as much familial support as an institution that we can, but our students do an exceptional job of caring for each other as well.”

Getting to know MSUB & RMC

Over the course of our conversations at each respective school, both gentlemen noted that when making the decision regarding which college to attend, perhaps one of the key points of consideration should be “fit”:

We asked both schools to share some things that prospective students might be surprised to learn about their institution:

There are a plethora of things to consider when choosing which college to attend, maybe what you’ve been looking for is right in your backyard…

Originally printed in the pages of Simply Family Magazine’s May 2018 issue.