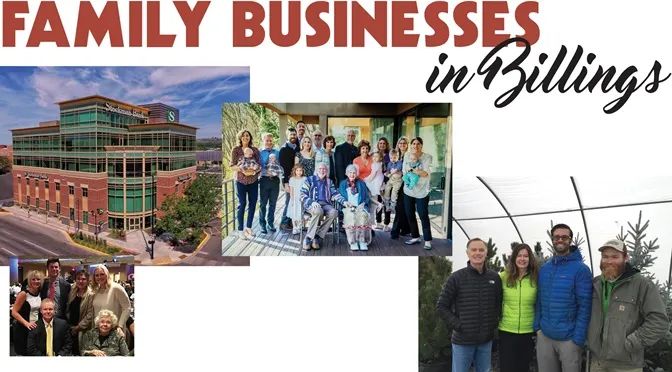 Have you ever stopped to think that behind every business there are people? That once upon a time that business was just an idea, then a dream, and finally a reality? More often than we might imagine, at the core of the businesses in our community are families. Whether it’s first generation or third, there is something incredibly special about family businesses. Unique challenges, for sure, lots of hard work, but they are an invaluable piece of a community. As you read on you’ll have the opportunity to learn more about the families behind several locally owned and operated businesses.

We asked each of the families to share ♦ how their business began, ♦ how they’ve balanced work and family, ♦ why Billings has been a great place to raise a family and run their business, and ♦ some ways their business has positively impacted the community.

a conversation with Bill Coffee, CEO 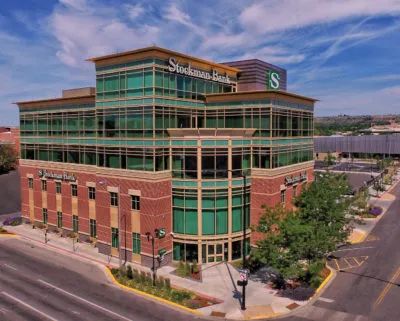 The backstory – When you go to the roots of Stockman Bank, you’ll find they began in 1953 when Bill Nefsy tried to get an ag loan in Miles City and was told they didn’t do ag loans. Considering he was in the “cow capital of the world,” it seemed crazy not to be able to get such a loan. Thus creating the catalyst that would lead this family into a legacy of providing a service, “Not only to ag producers, but to everyone in the community, and to be a true community bank before that became a buzzword.” Fast forward to the early ’90s when Bill Coffee, Bill Nefsy’s grandson, saw an opportunity to fill a need, and so he, along with Butch Bratsky, started the first Stockman Bank in Billings. They started as a loan production office in Billings on the West End, later purchasing a bank in Worden with a branch in Hysham, giving them a foothold in Yellowstone County, and the surrounding agricultural area. Simultaneously, they bought the land at 2700 King Avenue West, in the emerging Marketplace development, thus cultivating Stockman Bank Billings. The legacy of Stockman Bank runs deep, and has remained a family endeavor over the years, with Bill’s mother, Virginia, having started working in her father’s bank in high school, she remains working within the bank today, though now as a director; as are Bill and his sister, Caren. His father, C.M., was a director for over 40 years, up until his death in 2015. Carrying on the family tradition, both Bill’s son, Colton, and daughter, Abby, have worked at Stockman Bank.

The balance – With so much of the family involved in this ever-expanding family business, finding a balance is easier said than done. In fact, Bill says the honest answer is he’s not sure they have set boundaries between work and home. However, thoroughly enjoying the work has created a kind of balance of its own. He recalls family dinners with his grandparents, as well as normal dinners being filled with talk of the different opportunities and challenges going on at the bank. Similarly, evenings out with his wife often have him wearing his “business hat.” Working with family has the added bonus of creating opportunities to steal time that you might not otherwise have, as he recalls a recent trip to Missoula with his mother and sister. They might have been heading towards bank business, but the travel time in between was time spent together. He notes that it’s the same thing, having his children involved in the family business, “It’s kind of another opportunity to be with your kids, which seems to be more and more important to me all the time.”

Billings proud – When asked, “What makes Billings a great place to raise a family and run your business?” Without hesitation, Bill replied, “The people.” To elaborate, he views Billings as being the right size, with a vibrant, exciting economy and a lot of things to do, but small enough that there are “a ton of caring people here who step up.” Our city might not have the same affluence that you’d see in a major metropolis like Minneapolis where Bill had recently been at the time of our interview, but “We make up for it in a place like Billings where everyone works hard, and everyone gives more than their fair share…it’s just a fantastic place.”

Community impact – 1. Stockman employs great people. We provide jobs and opportunity, and that continues. We believe in training our people, we have wonderful benefits; we promote from within and continue to hire more and more folks all right here in Montana. 2. We’re very supportive of our community, especially in education and healthcare; not only with money but with time. Our people volunteer, serving on a lot of the boards, and providing leadership throughout the state. We continue to bolster the scholarships at Montana colleges and universities. It’s fun to be an active part of the community – to be a small part of the great things that these organizations are doing. It’s exciting and rewarding that we’re putting money to work right here in our communities. 3. We look forward to continuing to build on the technological advances going on. We’ve just revamped our website – that will be in full-swing in 2018, plus all the things you can do from your mobile device. We’ve had mobile deposit and transfers for a long time, but we continue to enhance those features and speed service delivery. We believe technology should enhance customer service, not replace it. No matter what you prefer, the in-person experience or never having to step into the bank, you’ll still receive the same great service at Stockman.

The backstory – You might say that teeth, and making beautiful smiles, is Dr. Michelle Roberts’ family business, except she has struck out on her own with Roberts Orthodontics, located at 2132 Broadwater Avenue, Suite B. Her father is a retired oral surgeon who maintained a practice in Billings for many years. Since her mother managed his office, she recalls spending time there as a kid, seeing how things worked and the enjoyment her father had for his work, made an impact. Having grown up in Billings, Dr. Roberts followed high school with the University of Puget Sound, graduating with honors in Biology, from there she attended Tufts University of Dental Medicine, earning her Doctorate of Dental Medicine, following that with the completion of her Certificate in Orthodontics and Dentofacial Orthopedics. Specializing in orthodontics for children, teens, and adults, Dr. Roberts enjoys getting to know each patient, building relationships with them that last long after treatment is complete.

The balance – In finding a work/life balance, Dr. Roberts notes that “It’s important to enjoy what you do, and have outside interests to get excited about.” Personally, Dr. Roberts enjoys spending time with family and friends, while also making time to spend in the outdoors – fishing, hiking, skiing, and with her dog, an Australian shepherd named Freckles.

Billings proud – After completing her orthodontic residency program, Dr. Roberts had the opportunity to work for a non-profit organization that provides dental and orthodontic care to the underserved population in Maine. Rewarding though that experience was, the desire to return to where she’d grown up prevailed. Giving her the opportunity to build her own practice in Billings, the community that “gave so much to me growing up.”

Community caring – Dr. Roberts shares that in each community she’s lived over the years, she’s found organizations to be involved with in order to give back. Since being back in Billings, she’s become a member of the Billings West End Rotary Club, and she also supports her patients and families with school, athletic, and other activities that they are involved in.

The backstory – Billings Nursery & Landscaping got its start in 1952 at 7900 South Frontage Road, but for the Marble family, the story began in 1968 when Robert and Joanne Marble moved their family to Montana and bought the business. They would go on to raise their family on-site of their business, in the same house Andrew’s parents live in now, and that Andrew grew up in. The business has grown over the years with the hard work of the Marbles’ sons, grandchildren, a great-grandchild, and loyal employees. A second location was purchased at 2147 Poly Drive. Presently, Richard (Andrew’s father) is still active in the business, while transitioning to the third generation – Andrew.

The balance – Working with family, shares Andrew, is mostly great; particularly getting to see family throughout the day. He notes that they have strived to treat all employees like family, however “we demand our family to be employees first.” Finding his own place in the business took time, as he recalls not initially wanting to be in this business after seeing all of the hard work and long hours that his dad put into the business. Yet the idea of working with his hands and being able to do different things, like designing and working outside, drew him back and now, he says, "I love what I do, and I can say that almost every day.” Andrew goes on to share that “Balancing work, and home life is perhaps the most difficult thing for a small business owner – especially for a seasonal business.” His family has grown accustomed to his working long hours for nine months, finding more of a balance in the winter. He notes that his balance is “more in terms of months than days; I try to make whatever moments I do have with my children count. Quality of time is important.” If one day his children wanted to continue the business, “That would be great,” he says, “but I would be equally happy if they chose something different. God gives everyone special gifts and talents, so I want them to discover what they are and pursue where they are called.”

Billings proud – Raising a family in both this state and community, they’ve found it to be a great place to live and raise their children, thanks in large part to the “terrific people that live and work here with us.” While there are plenty of things to do in Billings, what really makes a community great, reflects Andrew, are relationships. He notes that the business has supported many families through the years because of hard work and the faithfulness of so many loyal customers. “We have been blessed by our community and continue to try to give back as much as we can.”

Community caring – 1. Billings has blessed us with tremendous success, and in return, we have been able to help many non-profits, community organizations, churches, and individuals with their work in making Billings better. 2. By God’s grace, we have been able to make a living in a space that can be difficult; provide a living wage for our employees, and help people succeed in life. 3. We hope that we are able to continue making an impact on our community by being a leader in the nursery and landscape industries, beautifying the city with quality green spaces, and helping others are much as we are able.