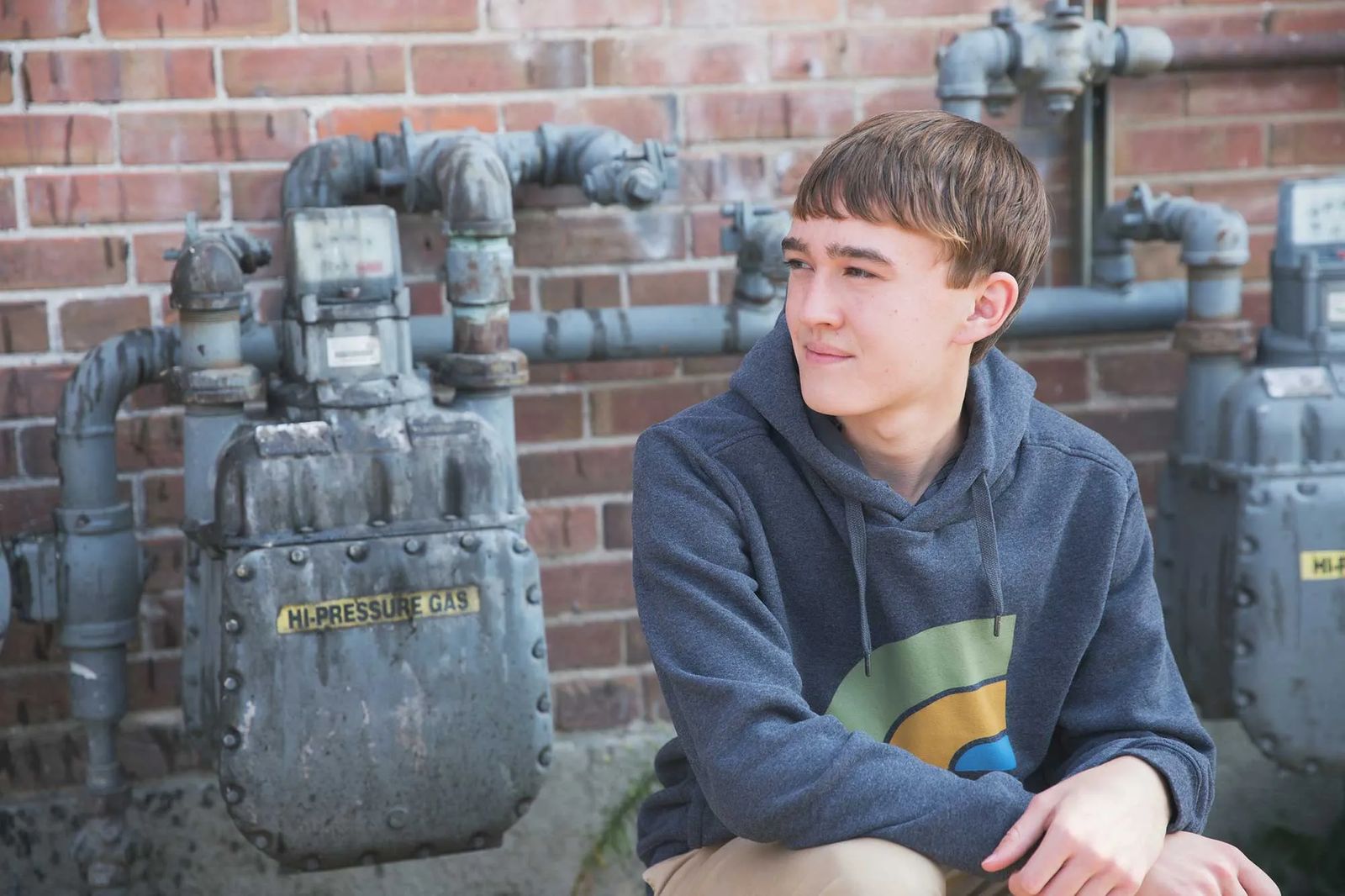 Robert South, a 16th-century English clergyman, once said, "If there be any truer measure of a man than by what he does, it must be by what he gives.” This year’s Simply Amazing Teen appears to have given much to his family, his peers, his teachers, and his community. Generosity, humility, kindness, and a steadfast dedication to hard work are common themes when discussing the character of an outstanding young man that Simply Family Magazine is proud to highlight – Austin Amestoy. The son of Brian and Christine Amestoy, Austin will graduate the spring of 2018 from Laurel High School and plans to attend a Montana college.

Austin’s mom, Christine, points to another quote to describe her son, one by Jeff Yalden that hangs on Austin’s bedroom wall. “Work for a cause, NOT applause. Live life to express, NOT to impress. Don’t strive to make your presence noticed, just make your absence felt.” She says that Austin truly tries to live his life this way, and she’s not the only one who has noticed his positive attitude. His Laurel High School choir teacher and musical director, Rhonda Burghardt, has this to say: “Austin has a positive attitude, all the time, about everything. He always says hello and is genuinely happy and excited to be wherever he is at any given moment.”

Keeping a positive attitude may sound simple, but for this busy teen, it has meant making a conscious decision to look on the bright side in any situation, no matter how busy the days can be for an active high schooler. Austin stands out as a leader among his peers and has been elected president of his class for the past three years. He was chosen to serve as the Student Body President for the entire Laurel High School his senior year and is actively involved in cross country and the speech and debate team where he served as Vice-President and placed 3rd in the state as a Lincoln-Douglas debater his junior year. He was also selected for, and attended, Boys State this past summer, where he was named Outstanding Citizen by his peers and was elected Chief Justice of the Supreme Court. A passion for music, his involvement with choir includes being chosen as a member of the top select ensemble, Laurelaires. Ms. Burghardt adds he has also been selected for numerous All-State and All-Northwest Honor Ensembles, receiving multiple Superior ratings at District and State music festivals and is regularly asked to sing the National Anthem at school and community events.

Austin is a natural born leader, almost by default. As the oldest child in the Amestoy family, he has three siblings following closely behind in his footsteps and looking, quite literally, “up” to him!  Alexandra is, as Austin describes, his “oldest youngest sister” at 15 years old, followed by Thomas (13) and Makayla (11). Austin relies on the support from his close-knit siblings as well as an extensive network of relatives. Christine and Brian have made family dinners a priority, purposefully including their extended family who lives nearby. Staying connected has meant juggling schedules to ensure that there is always at least one family member in attendance at the kids’ events to cheer them on.

When receiving the news of being chosen as this year’s Simply Amazing Teen, Austin says he was extremely flattered to be chosen, and although he knew several of the recipients from years past, he says he was surprised to be included in the distinguished group. “I am honored that people see something in me that would make me worthy of such recognition – I’m shocked!”

Although Austin may be surprised to find himself at the center of attention, many of his past teachers are not. Amy Caldeira, Austin’s cross country and track coach, has known him since his days as a student at Laurel Middle School. Caldeira says that although it would be easy to sing the praises of Austin’s academic and sports-related accomplishments, that’s not what truly sets him apart. She believes that “Austin is unique because he is a very gifted young man in many areas, yet is incredibly kind and thoughtful to those around him. He is a very hard worker but is quick to acknowledge the efforts and gifts of others as well. Austin is that one-of-a-kind student and athlete that inspires teachers and coaches, and reminds us all why we chose this profession in the first place!”

Caldeira had a front row seat to one hurdle that challenged Austin during his junior year. As a member of the track team since 7th grade, he had high hopes of hitting several new personal bests in long distance races. Unfortunately, Austin was sidelined with an injury for much of the season. In typical style, however, he was determined not to allow his spirt to be sidelined as well. Caldeira says, “Austin came to every practice and rode his bike with other kids, and would often look for kids who ran alone so he could keep them company. It was obvious that Austin was frustrated with his setback, but he came to every meet as a support and encouragement to his teammates." Caldeira recognizes that having such a positive role model for younger students to follow can have an impact on generations of students to come. “His peers look up to Austin. Having him around raises the bar for others. Both his work ethic and his relaxed, friendly way of interacting are contagious. His effect on not only the Laurel High distance program but also the entire school is immeasurable. He sets a precedent for our team that will long outlast his time in high school.”

Austin's dad, Brian, agrees and sees the same can-do attitude in his son that so many others have witnessed. He says, “When one of Austin’s teachers needs something done, they can count on him. To have somebody like that is a wonderful thing!” Brian also appreciates his son’s love for knowledge, and fondly recalls Austin’s passion for literature, especially about a certain North American bird of prey. “He couldn’t get enough of reading, and if you wanted to know anything about the Peregrine Falcon you asked 6-year-old Austin!” He credits this passion and laser focus as part of what has made Austin the person he is today. “I used to say Austin was an old soul, and he just carries himself so well.”

Austin, himself, is hesitant to bring the focus to himself when asked how he overcomes challenges he may face. Last year he attended Luccock Park’s senior high camp through his church, Laurel United Methodist. He credits one of the speakers he heard there with giving the students a challenge that quickly became his motto: live each day with a positive attitude, not only to benefit yourself but also those around you. Austin says, “It’s a simple message, but not always easy to do!” He tries to incorporate this positivity into every aspect of his life, whether inside the classroom or outdoors, racing around the track. Austin says, “Positivity applies to so many situations. Sure, life isn’t always perfect, but you don’t have to be stressed out 100% of the time. Believing in yourself and having determination will take you a long way.”

Austin’s indomitable spirit has grown out of the opportunity to participate in many different activities such as sports, music, and debate, allowing him to learn life skills like teamwork, cooperation, and self-discipline. He points to outstanding coaches and teachers along the way who have reinforced the importance of character and hard work. His faith and church family have also been integral in his solid foundation, and have influenced the resolute “moral compass” that many of his teachers and peers recognize. Christine says, “Being a part of the same congregation has allowed others to watch him grow into the young man he is today. Their support has always meant the world to Austin. You can’t ever have too many people that love, encourage, and support you!”

As a senior, Austin knows that the challenges he may face in the days ahead take on a bit more significance than those from his younger school days. He speaks about the far-reaching effect of his attitude and responds with wisdom that far surpasses his 17 years. Prioritizing what needs to be done and avoiding procrastination are two suggestions he gives for other students who want to be able to keep accentuating the positive in their own lives. Austin’s mom, Christine, shares some advice of her own for other parents who may be deep in the trenches of raising teenagers. She says, “It is so important to communicate with our children! Have those hard conversations and make it known that you are ready to listen. Yes, there will be hard conversations, but when you make your expectations clear and strive to instill your family’s core values, leading by example in showing what good manners, respect, and character look like, they will grow into beautiful young people who will inspire others to be better.” Austin’s dad, Brian, wants to send his son off into the world with a heartfelt and humorous reminder to “Keep working hard at everything you do, and it will pay off. I always hope for my children to try to experience as many of their heart’s desires as possible, and remember they have to take care of Mom and Dad when they get older!”

Special Thanks to Scheels for their generous donation to outfit our