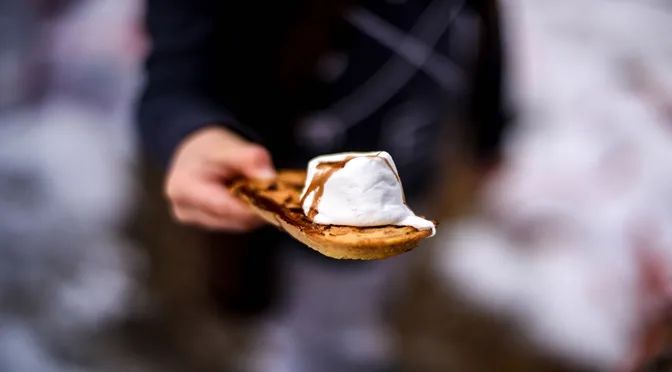 Behind-the-Scenes of April's Cook This column

It might be April now, with spring sprung and the sun making more regular appearances, but back when I was working on the Cook This column for SFM’s April issue, it was the last day of February. S’mores. In February. With well over a foot of crusty snow covering the patio fire pit, which left the BBQ for the actual roasting of the marshmallows. Of course the old grill is not as photogenic as a beautiful, multi-colored fire. And having double duty to be the one holding the metal skewers close to that heat, while trying to focus, adjust and shoot the photos with my professional heavy camera, well…it was a challenge! Welcome to the backstory to the creating of April’s Cook This column.

Best laid plans…I’d enlisted my soon-to-be 5 year old granddaughter, Selene, to assist me with the photoshoot. I’d already prepared a tray with all ingredients so everything would be handy. Of course, I forgot to include a towel or washcloth to wipe the sticky marshmallow off my fingers! Removing the softened (not roasted) marshmallow from the skewer required the use of my fingers of course. The same fingers that would then smash the chocolate and graham cracker together. Now I had sticky graham cracker crumbs on the right hand, as I tried to make camera adjustments and operate the shutter. What a mess! And Selene felt the need to wipe her sticky fingers on her tummy, of course!

There’s a reason S’mores are a beloved summer delight…The outdoor BBQ grill does not work for roasting marshmallows when it’s so cold out. If I held the lid closed with my hand delicately balancing the skewers high enough over the grill as not to have them touch, I could get the marshmallows to soften, but not turn that lovely caramel color. Did I mention it was a cold winter day in February? We could not be wearing our winter jackets for the photos, as most people do not camp in ski jackets. So I’d bundled my little darling up in layers hoping to keep her warm without the help of a jacket, mittens, scarf, and hat.  Her little cheeks and hands were rosy red from the cold. She was shivering. She watched me put together the first s’mores — the traditional recipe. I handed it to her and got her set up in the pose I wanted. She’d already informed me that she did not like s’mores. And I’d already had the pep talk with her explaining that she did not have to take a bite or actually eat the s’mores — she just needed to pretend that she liked them and was excited to eat. I guess deliberate pretending for something as awful as eating s’mores is a difficult assignment for a 5 year old. So here she was, cold and sporting a scrunched up nose that could be mistaken for nothing other than “ick”. But she’s so cute and adorable that I figured we could still use the photos.

Seriously though…For photo variety, I had already laid out a big heavy denim quilt on a patch of snow-free area under a big Ponderosa Pine tree in my backyard.  I got Selene and I inside the house while I put my camera on the tripod and attached my remote shutter release. My attempt to do a few shots of both of us together, sitting on that blanket under a pine tree eating our s’mores was also less than successful, as apparently the remote shutter did not like the cold. So here I am, grandma sitting on the ground, without a coat, holding a sticky s’mores, coaching my granddaughter with her pose etc. as I tried to get some candid shots. When I realized that wasn’t working, I had to do the grandma struggle to get to my feet, while holding the s’mores. It wasn’t a pretty picture. I ended up with us inside the house to finish the shots. Oh, and, FYI, a glass top stove doesn’t work well for browning marshmallows either! Just a little behind scenes story for this camping edition!  I feel I need to add this disclosure with the photos: "Professionally shot. Do not try this at home”.