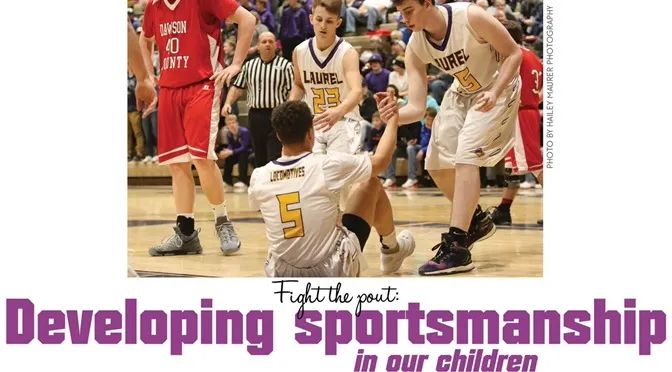 Fight the Pout: Developing Sportsmanship in our Children

Merriam-Webster’s online dictionary defines Sportsmanship as “Conduct becoming to one participating in a sport. (Fairness, respect for one’s opponent, and graciousness in winning or losing).”

As parents, the importance of teaching good sportsmanship often becomes glaringly apparent right around the time our children become old enough to play any kind of game with us. If you’ve ever played a board game with a preschooler who’s on the losing end of that game, you’ve probably witnessed the seemingly life-altering depths of that loss. The stomping, the pouting, the tears. Not the most gracious in defeat, those little ones.

Now let’s fast forward to a few years later, maybe the opportunity wasn’t taken to turn those losses into teachable moments and now we see that kid throwing a fit over the ref’s call, striking out and slumping away from the plate, pouting all the way back to the dugout; sitting sullenly at the end of the bench, letting one mistake overshadow the entire game, or refusing to shake the other team’s hands after a disappointing loss, or on the flipside, winning ungraciously.

There’s nothing wrong with being competitive, but the manner in which one handles the wins and losses of a game can be a great indicator of how that child will go on to handle the disappointments and victories that happen outside of the field/court. Not getting the grade they wanted, not getting chosen for Homecoming court, falling just short of earning valedictorian, getting turned down for the job…So how do we fight the pout and help to develop good sportsmanship in our children? To help guide our way, we checked in with Wendy Bekkedahl, a P.E. and Health educator for 19 years and counting with a Masters Degree in Sport Recreation, and Fitness Management, who also coached for 12 years, seven of which at the varsity level.

Modeling VS Teaching – When thinking about sportsmanship and young kids, the word teach doesn’t come to mind so much as model, says Bekkedahl. Whether coach or parent, “It’s got to start from the top. For example, you get to the gym and someone has your space. How do you handle that? What kind of behavior are you going to model for the kids?” She goes on to explain, “I don’t think you can teach sportsmanship outside of the context of the behavior. Reward their efforts in having good sportsmanship, but you can’t just de-emphasize winning in order to learn sportsmanship. They’ve got to be able to have good sportsmanship, win or lose.”

Going back to those board games, if you happen to be on the losing end, model the behavior you’d like to see: “Oh, darn it! Good game! You played well!” Or if you’re the winner, same basic script, though I’d imagine you’d drop a “Woo hoo!” in place of the “Darn it.” Regardless, if your child is the kid who habitually melts down over a loss, outline your expectations before the game begins. Follow through!

P.S. As tempting as it might be to maintain the peace and throw game after game of Chutes & Ladders, our kiddos will learn nothing by always coming out on top. Use the teachable moments following a loss to help them take a breath and start learning the lesson that they will not always be the winner and that’s okay. Was it just luck or was there something they could do differently next time?

Being the Role Model – Be the example in what it means to win and lose graciously. Don’t look to outside excuses following a loss, advises Bekkedahl. It’s not uncommon to hear parents, players, and even coaches blaming refs or others following a loss rather than looking at how they could’ve contributed differently. Don’t focus wholly on the negative, she says, but don’t be so quick to place the blame on someone else’s shoulders. Bad mouthing officials, teammates, or coaches is far from modeling good sportsmanship.

Reinforce Positive Behavior – If your child takes a loss well (or wins with grace), compliment her on what a good sport she is and how proud of her you are. There’s no shame in rewarding and reinforcing positive behavior. Perhaps before the game, offer an incentive: “If I see that you’re able to maintain a positive attitude and don’t pout during or after the game, we’ll go for ice cream.”

Bekkedahl also adds that “It’s okay to have instant emotion, but they need to be able to recover from that.” Meaning, no one likes losing and it’s okay to be disappointed, but you’ve got to be able to move past that enough to be a good sport and congratulate your opponent.

So there’s your role in all of this, but what about what we need our kids to strive for – the essence of living out good sportsmanship?

Give Your All – One thing I always tell my daughter, Do your best in all that you do (that goes for everything: at school, on the field, and at home). But back to the game, whether it’s at practice or in the game (or even on the bench), you’ve made a commitment to the team to show up and give your all for this season. If you’re going to do something halfway, then what’s the point? We all have off days and as someone who’s been on both sides of the athlete-coach equation, if there’s something going on that’s affecting your ability to give 100%, communicate. It makes life so much easier on everyone. Finally, it’s not easy to be the kid who’s not receiving all the glory, or who spends more time on the bench than off, but the bottom line is not everyone can be the star, and we all have different roles on any given team. To that end…

Follow Through on Your Commitment to the Team – This means showing up for practices on time, ready to work. It’s helping with the set up and take down. Working hard during the grind of practices (going back to giving your all). It’s learning, knowing, and executing the rules of the game you’re playing. It’s following the rules of the program; being respectful of your coaches and teammates, and those you encounter during game time.

However…If you’ve got an issue, use your voice. Don’t depend on mom and dad to have the tough conversations for you. Certainly use them to role play and practice what you want to say, but let the first step come from you. Ask your coach if you can have some time to talk after practice. Just remember – this conversation is about you, the coach isn’t going to discuss another athlete’s playing time with you. A final thought on this point, whether it’s you or mom and dad reaching out to the coach and the emotions are running high, do everyone a favor and give yourself a beat, don’t try to have a conversation that day, if anything wait a day and send an email to schedule an appointment.

Be Someone Your Teammates Can Look Up to – Just as we’re asking the parents to model the behavior we wish to see, we need to ask the kids to do the same. Be the kid who supports everyone on the team – who is the first to give the high fives, the pat on the back and “You’ll get it next time,” who helps the teammate and/or the opponent up after a fall. Play the game with try, heart, and integrity. Strive to be the one your teammates would vote Most Inspirational. Be someone your teammates can look to in victory and defeat. Be coachable.

Though the definition of sportsmanship directly references “sports,” the reality is that the traits needed to be a “good sport” go far beyond the court or field. In so many areas of life we’re required to work with others, let’s set our kids up for success in those interactions. Oh, and remember to model that outstanding sportsmanship from the bleachers (and on the drive home)! May the best man win…With grace.