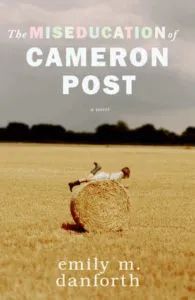 Montana-raised Emily Danforth’s debut young adult novel, The Miseducation of Cameron Post, begins in 1989 in Miles City, Montana. When 12 year old Cameron gets the news that her parents were killed in an auto accident, her first feeling is relief. Relief that they would never know she had recently kissed her best friend, Irene. Irene was Cameron’s eye-opening first experience of how it felt to be attracted to and kiss a girl, which leads to a variety of emotions and decisions, setting Cameron on her complicated journey.

She ends her friendship with Irene only to meet someone else. A beautiful new girl, Coley Taylor, joins the Miles City community, leading Cameron into her next experience of having feelings for another girl. Cameron’s “miseducation” is written from her perspective of growing up in a small, conservative Montana town in a time before television and technology assisted in understanding and accepting sexual orientation.

Danforth’s ability to navigate the reader through the tangled and unsettling emotions associated with coming-of-age while being both gay and orphaned are impressive. Cameron’s ultra-religious Aunt Ruth steps in to raise Cameron after her parents’ passing, and when it becomes apparent that Cameron is gay, she sends her to a boarding school near Bozeman, Montana called God’s Promise, designed to help Cameron live a more holy, ex-gay lifestyle. Ironically, this is where Cameron first discovers a community of other gay teens whom she can relate to.

Danforth’s writing paints a beautiful picture that is both engaging and poignant. The story unfolds in a relatable way which keeps the reader interested and hopeful that Cameron’s path is unfolding in a way which brings her happiness and understanding. A worthwhile read for a variety of reasons. Support this Montana author, and enjoy Cameron Post’s intriguing coming-of-age story.