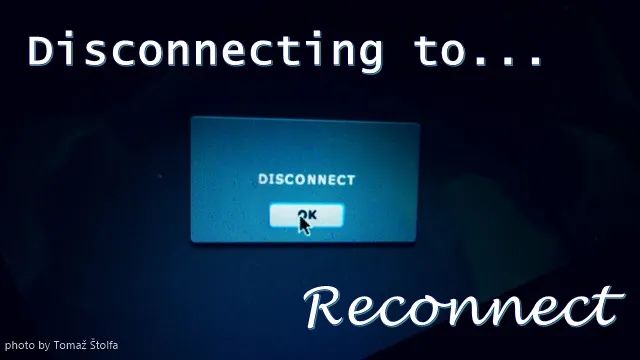 In late October of 2015, my family made a radical decision. Some people scoffed at our naiveté, some approved, and some thought the whole thing ridiculous. The journey was challenging, and the results shocked us.

Sunday mornings, our family is at church, and the solid friendships, good conversation, and faith building that happens during that time is really important to us. We always leave feeling a sense of connection; part of a bigger family that loves us and loves our kids.

But it seemed like 15 minutes after we were home, I would find myself in the kitchen making lunch with the beagle staring up hopefully and affectionately from my feet, and the rest of the family settled onto couches or chairs, their faces reflecting the light of their screens and all conversation coming to a quiet, lonely halt. “Lunch is ready!” I would finally call, and childish voices immediately groaned and complained. “Already?? We just started! Let me finish this or the mob is gonna kill me!”

In response, my husband and I decided in mid-October that we would make every Sunday our “tech-free” family day. No electronic games, no television. That meant that the Kindle Fires were left on the charger, the Wii was quiet, the TV was dark. Our biggest question was:

WHAT ON EARTH DO WE DO WITH OURSELVES?

Our family has long held electronic activities in restraint, pretty much following the most recent healthcare guidelines to limit screen time to 2 hours or less per day. We were cautious about content as well – either Mom or Dad had to approve of new games, videos or e-books, and we used the Amazon Parental Controls for the children’s-only handheld devices, their Kindle Fires. We kept a careful eye on electronics because it has always seemed to us (as perhaps a slightly older generation of parents) to be a huge distraction from the real focus – family relationships, influences, making good memories together. Sure, everyone is quiet and enjoying the entertainment of their electronic of choice, but was that really the best thing for our family? Shouldn’t we stop and be a little more conscious of Life itself as it passes by, our children racing toward adulthood and independence?

I am a Type A personality, sadly… so I like to know exactly what my goals are. Ours were these:

Given the goals, we had a pretty clear motivation and ideas on how to proceed. For us, family activities are best if they are out of doors… so bicycle rides over various parts of the Billings city trail network are really enjoyed. Fishing is possible 12 months out of the year, even if a good 1/3 of that year involves an auger and ice fishing (the fish do tend to be extra hungry, so we often get good results!). We love to go hiking, and with places like Four Dances Natural Area, Norm’s Island/Lake Josephine, Two Moon and Phipps Parks in the area, there are many options. We enjoy shooting sports, and target practice areas are readily available as well.

Some Sundays, the weather just really didn’t cooperate, even though we like sledding and building snowmen. For those days, there are indoor options – baking cookies or making DIY soaps, putting together holiday crafts (there are a plethora of kits available from Michaels and Hobby Lobby, for those of us parents who are Creativity Impaired), and even options that are less “fun”, like helping a child clean their room. Board games. Telling stories about when Mom and Dad were kids. Setting up a small tent in the living room. Teaching the dog a new trick. Two-against-one Dad wrestling. Something as simple as a jar at the kitchen table filled with strips of questions to inspire conversation. Coloring. Karaoke. Cuddling under a blanket and talking.

How did it work out?

I’d like to be able to say that everything was sunshine and roses and we suddenly started singing together as we danced through the fields, ala’ The Sound of Music. Sadly, the 8 year old is the only one with a decent singing voice, and our individual dancing skills are somewhat atrocious. The truth is, my 9 year old son was secretly infuriated by the loss of his Precious, and within 3 weeks of implementation, our chronic pain with screen use became acute. Who knew??

I have his permission to tell you this next part. My son started sneaking his Kindle at night, somehow getting around the Parental Controls. He literally played games ALL NIGHT LONG on three separate occasions (which explains the fact that despite his apparent exhaustion, he had no fever, no flushed cheeks, no GI issues… so the concern I lavished on him as he slept until noon was a bit of a Mom Fail). We finally figured it out, and he lost games for a week… and all I’m going to say about that week was that it wasn’t pretty!

He explained later that those 2 hours a day (minus any time taken away as a disciplinary measure) were something he thought about almost constantly when he wasn’t playing, and that even though the family things were fun, he just wanted his games. So, he just took them.

As comfy family life around our household flat blew up, I “coincidentally” saw an article on social media (and yes, I recognize the irony) about something called Electronic Screen Syndrome. I wound up ordering (ASAP on Amazon Prime!) a book called Reset Your Child’s Brain by Victoria L. Dunckley, MD.

Dr. Dunckley explained that even in time and content-limited situations, kids can become literally addicted to screen time. Literal brain atrophy. Loss of brain “white matter” integrity (the communication material of the brain). Reduced cortical thickness (impairment of cognitive tasks). Cravings and impaired dopamine function causing children to react physiologically as though they were addicted to alcohol, cocaine, or heroin! It’s a physiological response to a non-natural environment, and it’s damaging (sometimes permanently) our children.

She said that interactive screen time causes hyperarousal (fight-or-flight) and our brains, our blood flow, and our energies go toward involvement in imaginary scenarios instead of living normal life. Light-at-night affects the body’s ability to produce melatonin, and internal sleep clocks are “dysregulated”. Dopamine levels are all over the map until the only way our kids “feel good” is when they are being electronically stimulated. Even in electronics-limited kids like mine! Even when the content is not especially violent. It is the method rather than the message that causes the problem.

The good news for us was that within days of initiating a complete interactive-screen fast, my kids came out of it. Their personalities changed, and it was all for the better. My Minecraft-addicted son literally asked me to talk to the parents of his friends and explain what screen time can do to brains, “so that they wouldn’t have to feel like (he) did.” The kids, despite the fact that they really did enjoy the games, and sometimes still wish they could play, were so convinced by their own experiences that both of them asked me to sell their Kindles and Wii games!  If anyone had suggested that as a possibility before all of this started, I would have laughed all the way down the street. NO. WAY.

So, what started out as a simple desire to reconnect and strengthen our family relationships ended up as a complete change in our household. For us, the right choice was to step away from the screen. None of the four of us have smartphones. We keep social media and even television time limited. I will be honest, it’s a lot more work. I keep praying for my kids to become bookworms, and in the meantime they are just rowdy, energetic, creative and happy children. At the Wierenga house, “Retro Rules” and disconnection from screens has given us a much better personal connection. Anybody want to meet at Sacajawea Park for some sledding?