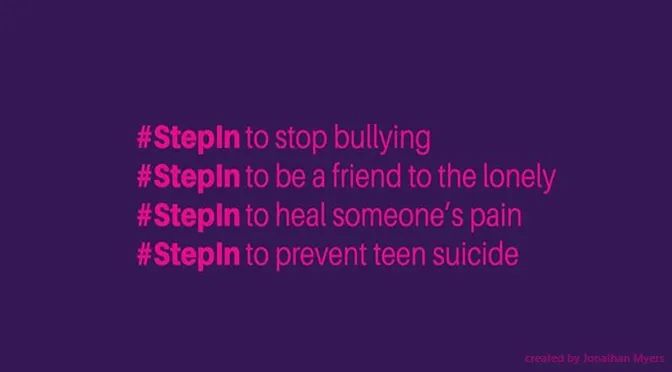 A call to action: ‘Step In’ to prevent teen suicide

As I write this, it’s been exactly two months since my community was rocked by the sudden death of one of its youth. Two months…the blink of an eye and a lifetime, all at once. In the immediate aftermath there was much blame and fingers being pointed as news broke across social media - born from heartbreak and fear – but from that, important conversations emerged and continue to be had about how to prevent this from happening again – not in our town, not to our youth. One is too many. And so, a call to action was launched to not only open the door for conversation, but to take action, to “Step In.” Asking us all to:

Yet it’s apparent that this is a problem that is (and has been) all around us, in communities everywhere. Scrolling through the Facebook feed, it seems almost daily that a new story appears about teens/children experiencing relentless bullying who saw no other way past the pain than to take their own lives. It’s not enough to say, “It’s got to stop.” Lip service only gets us so far, we’ve got to take action, we’ve got to choose kindness every day and be the example for the children and teens in our lives – in person and online. We have to step in and show them the way. Do as we say and as we do.

You can also check out these resources to learn more about getting help for yourself or others:

We must remember that whether it’s children, teens, or adults, no matter the face that’s being shown to the world, none of us can truly know what’s playing out inside another person. Be the change you want to see in this world; find patience, choose kindness. #StepIn.

Join the call to action: #StepIn

“I am so touched by the number of kids who talked to me about Sam. They shared memories that we will treasure. Overwhelmingly, they said he brought smiles and laughter. So many kids told me that Sam treated them kindly when others didn't. They told me about times he "stepped in" when someone was being unkind to them. Times when he asked a person who was alone to come hang out with him. Times he made sure to ask a friend if they were ok when he could tell they were hurting. I could not be prouder of my son. It hurts me to think that he may be remembered as weak because of his last decision. His last decision does not define him. Sam was strong - physically and mentally. He stood up for things. He was genuine and real. He never wanted to bring others down so he smiled and laughed, even while hurting. I asked him how his day was one time and he said "great" like he always did. I asked if he would tell me if it wasn't. He said "no, I wouldn't want to make you sad". Wow.

Strength can be great but can still be finite. Layer on layer of hurt - for yourself and others. Day after day of trying to be happy for everyone else. It eventually fills a heart and doesn't leave room for anything else - especially hope.”