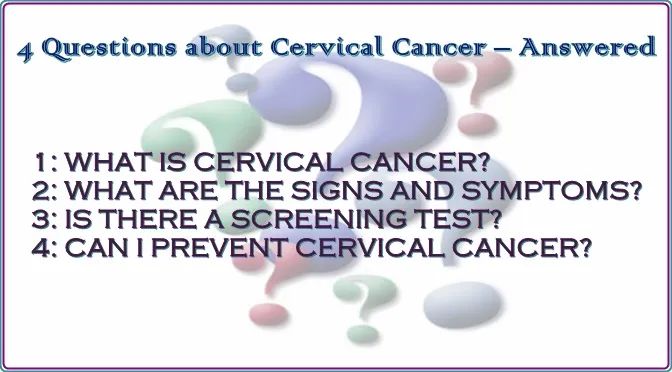 1: WHAT IS CERVICAL CANCER?

A woman’s cervix (the lower part of the uterus at the top of the vagina) is covered with a thin layer of tissue. When this tissue is healthy, it is made of cells that grow, divide and are replaced as needed. Cancer of the cervix occurs when these cells grow and divide abnormally. They may grow deeply into the cervix or spread to other organs. Eventually, cancer cells will form a mass called a tumor.

2: WHAT ARE THE SIGNS AND SYMPTOMS?

In most cases, the signs and symptoms of cervical cancer do not appear until the cancer is at an advanced stage and has already spread to other tissues and organs. However, there are some signs that may present early:

Signs of advanced cancer can include:

If these symptoms appear, it is important to talk with your health care provider.

3: IS THERE A SCREENING TEST?

Yes. The PAP test, when done at regular intervals, checks for cell change on the cervix and allows for early detection of abnormalities. Fortunately, cervical cancer generally takes years to develop. During this time the cells of the cervix will go through precancerous changes called cervical dysplasia. The PAP test is designed to detect these precancerous changes so that early treatment can be initiated prior to cervical cancer developing.

An HPV (Human Papilloma Virus) test is also available. It is used along with the PAP test to screen for cervical cancer in some women and as a follow-up test when a woman has an abnormal PAP test result.

4: CAN I PREVENT CERVICAL CANCER?

The number one factor that can make a difference in developing cervical cancer is not catching precancerous changes before they become cancer. The PAP test is the most reliable and effective cancer screening method available and women should have yearly wellness exams with their OB/GYN.

The most important risk factor for cervical cancer development is infection with certain types of HPV linked with cancer. The following factors increase the risk of becoming infected with HPV:

Additional risk factors that contribute to development of cervical cancer include:

To learn more, ask your physician about how you can protect yourself and your family from cervical cancer or contact Billings OB-GYN Associates at billings-obgyn.com.

About the author...Chad completed his undergraduate studies at Stetson University and earned his medical degree from the West Virginia School of Osteopathic Medicine. He completed his residency in Obstetrics and Gynecology at the San Antonio Uniformed Services Health Education Consortium in San Antonio, Texas. Dr. Abbey joined Billings OB-GYN Associates in July, 2015.

Dr. Abbey was born and raised in Billings. He and his wife Michelle have two children. After a long military career, Dr. Abbey is excited to return to Montana. He enjoys spending time with his family, traveling and outdoor activities especially fishing with his two sons.