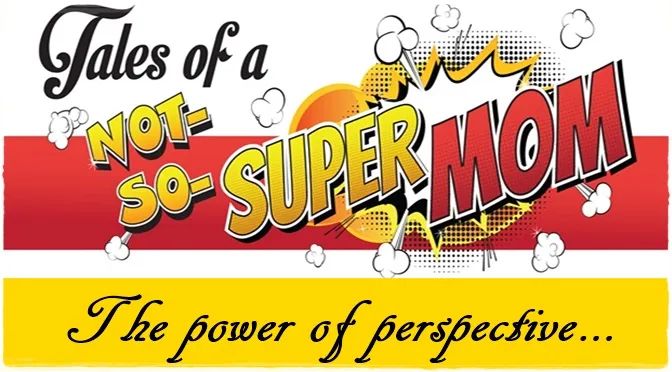 Tales of a Not-So-SuperMom: The Power of Perspective

from the pages of the September 2015 issue of Simply Family Magazine. Check out the digital edition, here!

"Oh Mooooom?! (pause) I have a surprise for you! (pause, louder) My pooooop! (pause, louder still) IT'S BLUE!!"  Yep, that happened over a decade ago, about 24 hours after the "mysterious food coloring incident." Mystery solved, and pretty impressive evidence to boot.  But what was the motive? WAS there a motive at all, other than to send me into a hair-on-fire panic?  All I knew at that time was it was another day in the books where being cute (and food coloring not being poisonous) kept my kiddo alive ;-).

Before becoming a parent I never could have imagined being serenaded by such an odd stream of "toilet tunery". This was also the year that the same child brushed super-glue and proceeded to rip off half of their eyebrows, looking like Groucho Marx in our Christmas photo.  It was no coincidence that it was recommended we wait for kindergarten enrollment and begin looking for a new preschool because they were closing. And moving away.  Far, far away.  I was usually out of the Mother of the Year running by January 3rd anyway, but I was beginning to wonder if I was raising a future criminal. At least that was my perspective.

Hmmmm, PERSPECTIVE: a particular attitude toward or way of regarding something; a point of view; position, stance, or interpretation.  Well, my "particular attitude" was that as a parent I was failing.  A few years later and we are dealing with a child who adamantly refuses to walk in the line every morning before school starts because "Mom, there is this awesome playground! Why would I want to walk in a stupid line?" Logical? Yes.  Acceptable? Absolutely not.

Fast forward several years when this young yeti's hormones began to set in; our household made a cave full of rabid wolverines look like Disneyland. Stuff. Just. Got. Real. More volume. More opinions.  More arguments with family, students, teachers, coaches---often times just for the sake of arguing. More mistakes---some learned from and many not.  And then just when you think you've had the last bit of life and parenting joy sucked out of you, perspective comes a knockin'. It can show up in a conversation with another parent who has been there and done that, sometimes even worse than what you are going through.  It can come from a parent of a disabled or terminally ill child. It happened under all of these circumstances for me.  In those instances it doesn't take long for perspective to change.

Sometimes our parents will offer perspective in their own "helpful" way.

Me: "Well, I have to go to the school again because your grandchild thought that underpants were optional and felt the need to "share" this brilliant idea with everyone today at recess."

My Mother: "Well at least he doesn't have meningitis.  Did you hear about that? Some kid drank from a water fountain at school in Missouri and they died of meningitis. So don't let him drink from the school water fountain."  And there you have it, perspective. Now I wasn't worried about my kid showing a full moon at recess, I was relieved that he didn't have a debilitating bacteria encroaching upon his spine and overactive brain.  See? Perspective can be changed no matter how strange the conversation.

There is a reason that our children do not grow up overnight, even though it sometimes seems that way. We are given these incremental obstacles to gain perspective and hopefully wisdom. When we think about our kids' behaviors that drive us absolutely crazy, one of our biggest concerns is how it makes us appear as parents. Badly Behaved Child=Bad Parent.  I have to disagree, and here's why. The behaviors that get kids in trouble are often times the qualities that serve us well as adults---assertiveness, confidence, fearlessness---they just don't fit into kid world when they are almost always in subordinate situations.  So, we have to find a way to teach them the importance of being respectful and kind while not squelching the other behaviors completely.  Appreciating and nurturing a child's strengths while still reminding them where they stand on life's totem pole for the time being is a tricky line to walk and another reminder of how extremely tough it is to be a parent.

So back to the blue poop story----was there ever a motive? I don't think so. There was definitely a lack of impulse control, something we continue to deal with on a daily basis.  But this was also a matter of curiosity, confidence, and fearlessness of consequence---and believe me there were consequences other than blue poop for 3 straight days.  Perspective has helped me realize the bigger picture of parenting. This is a resilient, smart kid who is INTERESTING and isn't about to fly under anybody's radar anytime soon. Lord help us all.  And I love him. Completely. But just to play it safe, I store the food coloring on the top shelf because you never know when confident curiosity might strike again.....

About the author...Ann likes beautiful sunrises, pancakes for dinner, old dogs and helping other moms realize their Super Powers.