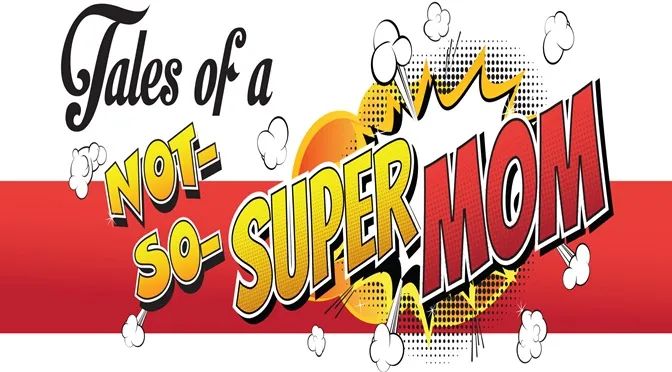 Tales of a Not-So-SuperMom: Where's My Cape?

from the pages of the August 2015 issue of Simply Family Magazine. Check out the digital edition, here!

Remember the "Super Friends" cartoon? It would come on Saturdays at 6am, and I would be sitting in front of the TV clad in Holly Hobby pj's awaiting the weekly adventures of the Justice League: Wonder Woman, Superman, Aquaman, Batman & Robin, and The Wonder Twins.  Together with their individual super powers they would save the world while wearing their high flying capes---all except of course for Wonder Woman.  Who needs a cape when you have knee-high red boots, gold bracelets, and a massive jeweled headband that is 8 shades of awesome and a bag of chips?!  By 7am I had an extra nightgown tied around my neck, draping down my back as I dove into my Cheerios, buried in sugar that I poured on with lightning superhero speed (before Mom caught me). I was ready to take on the world, fully caped, sugar high, ready for the weekend!

Unfortunately as adults, the superhero cape-wearing opportunities aren't as plentiful---well, I do wear a nightgown cape around my neck but only around the house when I vacuum (don't knock it till you try it) or lip sync battling with my kids (the cape makes you a winner 9 times out of 10, guaranteed, just sayin').  Or ARE the opportunities more plentiful than we think, at least in the proverbial sense?  What we love about the capes are the super powers they represent, right?  To prepare and persevere through the wonders and challenges of parenting teenagers, it's nice to have your own personal group of Super Friends.  I highly recommend it.

Just like in the cartoons, no one hero has all of the superpowers---they EACH have something special that makes them an important part of the team. Do you know YOUR super power?  Maybe you are a great listener and have wisdom to share with a parent of children younger than yours (when asked, of course).  Or is your power in the realm of hospitality? Being the friend who tells a friend what they need to hear and not what they want to hear? The great cook that makes a meal for a family just because you care? Maybe you are the comic relief, always good for a smile in the face of difficult situations. It is important to be championed by Super Friends, the ones that help us fight the good fight and make us stronger in our weakest moments. Without Super Friends I would probably be found in a corner of my home rocking in the fetal position devouring a bag of double stuff Oreos. Learning to focus on the big picture has been the best benefit of leaning in and opening up to fellow caped crusaders.

This is even more evident now that we have 2 teenage boys roaming around our home, eating all of the food, breathing up all of our air, grunting like cavemen, and boasting about hair growth in new places on a daily basis.  Teens have some effective powers of their own that are difficult to battle, especially the one where they still look like sweet little babies while they sleep. That one gets me every time! I have developed a few combative tricks when facing these young yeti---like the ability to ignore my sense of smell when the opportunity of a big hug comes along.  That said, the cool part about parenting teens is that old super powers evolve and new ones are discovered.

Parenting young children put my insecurities in full force. It felt like I was missing something that seemed to come so easily to my Super Friends and so many other parents---it was like witnessing the creation of a whole new Justice League!  Where did they hide their capes? Playing Candyland, making crafts, and listening to Raffi for the zillionth time was my Kryptonite.  I. just. couldn't. take. it.  Eye twitch! My attempts at being an "involved" parent of a toddler seemed to be just one failure after another.  But self-esteem as a parent of young kiddos is overrated anyway since most days I looked like a zombie who combed their hair with a stick of butter and let their clothes be used as napkin, or better yet, a Kleenex.  Ick.  (A cape would have been really handy during allergy season....)

The joy of parenting has shifted and gained power as the kids have entered their teen years.  They can feed themselves if needed, drive to the store for me when I'm rockin' my zombie look, share their wicked wit, Vines, and new music downloads, and they totally get (not really) my husband's  and my parenting style which is tough love mixed with a lot of Seinfeld quotes.  They are FUN to hang out with---in a strange and mysterious way. We aren't even close to being out of the woods with the teenage years but with the Super Friends at close range, we continue to be ready for the adventure.  Now onto finishing my vacuuming.  Nightgown cape? Check.  Massive jeweled headband? Check. Red boots? Not yet, they are on my Christmas wishlist.......

About the author...Ann likes beautiful sunrises, pancakes for dinner, old dogs and helping other moms realize their Super Powers.