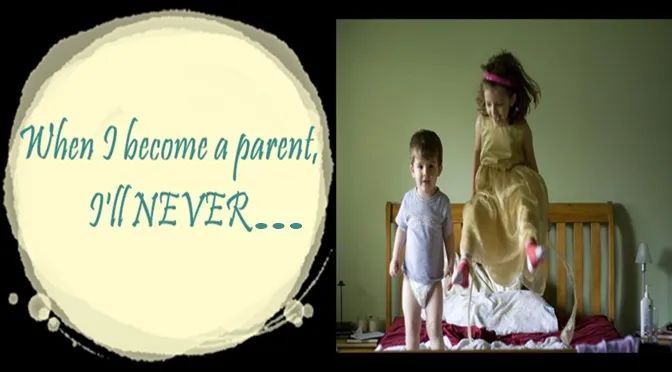 Parenthood: Things I said I'd NEVER do...And then I had kids

Before I was living the reality of having kids of my own, I - like so many before me - had those lists of things I swore I’d NEVER do. Things like, let my kids jump on my bed, have a baby in December (turns out there’s not a lot of say in that particular matter), rock my child to sleep…Just to name a few! But, I've been a parent for almost 10 years now and all those things I said I'd NEVER do, well, you know what they say: Never say never…

Let my kids jump on my bed; what can I say? There are some looong winter days in Montana that are much too cold to go outside. What better way to burn off all that pent-up energy than to let my kids jump, wrestle, and rumble on my queen size bed.

Have a child in December? Having to share a birthday with Christmastime, who would ever do that to their kid?! Alas, as I mentioned, it turns out we don’t have all that much control over that - my daughter was born in mid-December. Ahh, best laid plans…

Rock your child to sleep? Unheard of! I was raised with the methodology that babies are fed, comforted, have their diaper changed, and put into bed to let them fall asleep on their own - crying or not; oh, and naps were to be scheduled. It turns out my husband had other ideas and a couple months after our daughter was born she was rocked to sleep every night and nap (unless she was already asleep), until she was about a year and a half, same goes for her younger brother. Now that our kids are older I can tell you rocking did not ruin them. In fact, our kids are some of the best troopers and sleep great wherever we may be.

Now don't get me wrong, I have friends who have to structure their kids' sleep schedule because it's what works best for them and honestly, THAT is exactly what parenting is all about! Don't let yourself be put into a box of the right or wrong way of parenting. Do what is best for your kids and family. Whether it’s letting your kids jump on the bed on long winter days, taking the time to enjoy those precious moments bonding with your kids as you sit and rock them to sleep, or whatever may have fallen on your “I’ll never!” list. Parenthood is an adventure and sometimes the road can be uphill, muddy and rocky but don't let it get you down- put on your rain boots and trudge through the mud. The adventure is what you make it!

Take a trip down memory lane and share some of your pre-parent "When I become a parent, I'll NEVER..." ideals in the comments below!

About the author...Rebekah was born and raised in Washington and currently resides in Montana. She is a dance teacher, mother of two and a creative soul. She enjoys cooking, baking and creating with fabric.