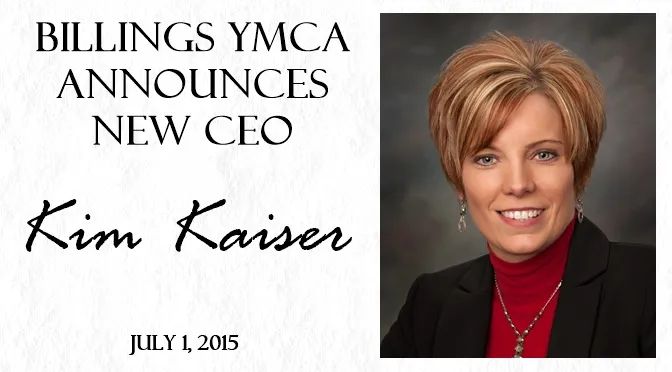 On Wednesday, July 1, 2015 Billings YMCA Board of Directors President, Greg Ando, announced the appointment of Kim Kaiser as the YMCA’s Chief Executive Officer via press release. She’ll step into the position July 14, 2015.

Bringing over 20 years of relevant experience, Ms. Kaiser previously served as Senior Advisor of Major Gifts and Campaign at St. Vincent Healthcare Foundation and Executive Director of RiverStone Health Foundation. Her resume includes experience in administration, executive planning, fundraising, and marketing in the nonprofit sector. She has successfully lead multimillion dollar campaigns, including the RiverStone Health Hospice Home campaign and St. Vincent Healthcare’s Heart and Vascular and Pediatric campaigns, according to the press release.

“Kim will bring leadership and creativity to the YMCA and a deep sense of commitment to our region’s nonprofit sector. She has served nonprofits in program management, fundraising, and leadership roles and has the experience needed to take the Billings Family YMCA to the next level in community service and development,” said Greg Ando.

The press release would go on to note that Ms. Kaiser earned a bachelor’s degree in Health Promotion from Montana State University Billings and is a Certified Fundraising Executive. She currently serves as the Board Chair of PLUK (Parent’s Lets Unite for Kids), is a trustee of the First Interstate Bank Centennial Youth Foundation, serves as an advisory council member for the Billings Gazette Magic Magazine and serves as a volunteer for the American Cancer Society’s Relay for Life. Nationally, she serves on the Association of Healthcare Philanthropy Journal Advisory Council. Kim is a Billings Leadership and Montana Leadership Alumni, past President of the Association of Fundraising Professionals Montana Chapter Board and a member of Billings Downtown Rotary Club.