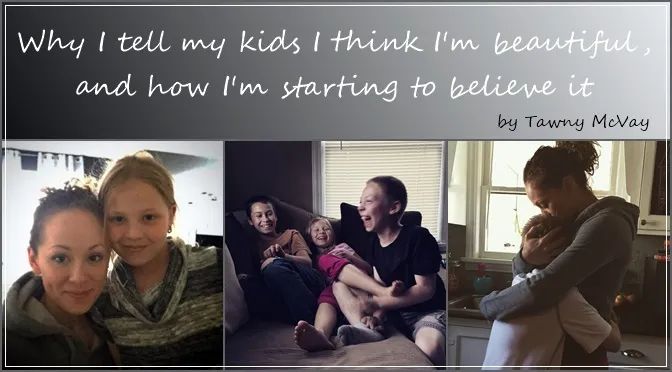 Why I Tell My Kids I Think I'm Beautiful, and How I'm Starting to Believe It

“I need to go on a diet”, my 10-year-old son remarks nonchalantly, causing me to almost drop the glass I'm putting into the dishwasher.

I look over at him, all gangly limbs and athletic youth, and exclaim, “Why in the world would you think that?”

He simply shrugs and returns to his toys.

It's around this time that I start having the same sinking realization I've had over and over again through the last few years – that I've failed as a parent. Like when my daughter told me at 7 that she couldn't wear a certain outfit because it made her look fat or cried a short time later over how “ugly” her smile was when her adult front teeth started growing in, or when my son didn't want his hair cut because his ears are “too big”.

As a personal trainer, I hear my fair share of body woes on an almost daily basis. This woman hates her thighs, another her nose and the way her arms look fat in this kind of top. That guy wishes he was taller and this one despairs his beer belly. Each and every day, as I help people gain muscle and lose fat, the real battle I'm fighting isn't one of calories in and out – it's skewed self-perception.

Because her nose is terribly cute and her arms are tan and muscular. Those thighs? They actually make most women jealous of her curves. And that beer belly? Nothing that can't be fixed by cutting out his daily soda habit, and definitely not something any of his friends notice. To each of these people, however, these features are prominent attributes they see every day and dislike. I know how they feel because like each of them (and I suspect, most of the population) when I stand in front of the mirror, I see a vastly different picture than those around me. I see frizzy hair, a flat butt and a stomach not quite as tight as it was two kids ago. Unfortunately, again like most, I am vocal about these perceived shortcomings.

And my kids have been listening.

I often shake my head in frustration and complain that they never listen to a word I say, and yet they have an uncanny knack for parroting back my words and sentiments in their own quirky little ways. And what they learned from me - before I knew better - was that we need to be critical of ourselves. We need to find flaws where there are none. God help me, my children have carefully observed their mother, who spends her working hours helping others make peace with the image in mirror, find the fault in her own. For what seems like the thousandth time, I promise myself again on this morning that I will set a better example for my children; they will hear me praise my body for what it can do and what I love about it rather than listen to me despair its faults.

In the meantime, I work daily to undo the unintentional damage I've caused by forcing that positive focus. I praise my daughter's ability to do flawless push-ups one after another and make sure my son knows his perfect rhythm as he choreographs his own dance moves amazes me. And I ensure they understand that our self-perception is so much more than the physical. It's the heart that is so utterly kind she can't bear it when her brother is in trouble and will defend him even when she's the one that's been wronged. It's the courage inside my son that embraces who he is with no qualms even when others try to change him or tear him down.

And in trying to change my children’s' views, I'm slowly changing my own. I'm learning to focus on the  number of pull-ups I can do over the number on my jeans and the strength of my heart through the many storms it's weathered over my utter dismay that once again my hair is resembling a jungle.

And that's the true beauty of parenthood, I think, that in trying to raise better people we become better versions of ourselves.

About the author…Tawny McVay is an ACSM Certified Personal Trainer and mother of two who owns The Asylum Gym and occasionally finds time to blog about her #committedlife. She's incredibly passionate about helping women lead their best lives and can be reached at 406.696.7925.