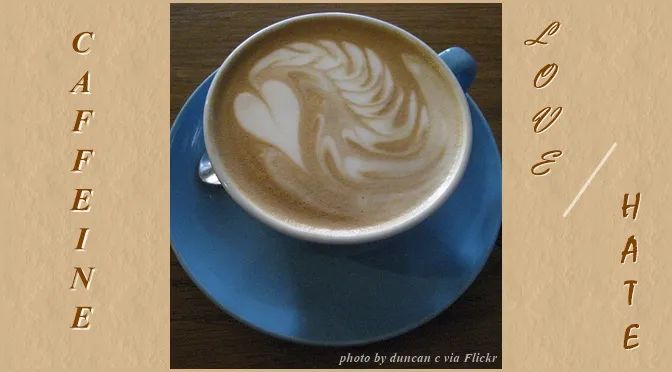 Caffeine: Should We Love It Or Hate It?

According to research, caffeine is the most widely used, behaviorally active substance on earth.  In the United States, 89% - 96% of men and non-pregnant women over the age of 18 consume some type of caffeine.

Our caffeine consumption comes in many forms: coffee, tea, soda, energy drinks, espresso beans, chocolate, pain medication and dietary aids, to name a few. However, coffee still makes up the largest portion at 71%, tea 16%, and soft drinks 12%.  Average daily consumption is 177 – 299 mg of caffeine. However 20% - 30% of Americans consume more than 600 mg a day.

Of all the caffeinated beverages, coffee is currently the second highest consumed beverage in the world after water.  It’s approximated that 500 billion cups are consumed every year.  That’s quite a few cups of joe!

The newest and fastest rising source of caffeine are energy drinks with names like Red Bull, Jolt, Full Throttle, and Rock Star Guava.  Because energy drinks contain other added ingredients such as high fructose corn syrup, sucrose, and herbal additives, they fall within the 1994 Dietary Supplement Health and Education Act and are not monitored by the FDA.  They offer the illusion of a healthy alternative for a quick-energy high, even though they contain anywhere from 9 mg to 15 mg of caffeine per ounce which is as much as 60% higher than the current FDA caffeine restriction (6 mg per fluid ounce).

Caffeine is a double-edged sword. According to studies, benefits of caffeine include an antioxidant effect and possibly reducing the chance of developing non-alcoholic fatty liver disease.  On the other hand, caffeine can raise blood pressure and may lead to a cardiac incident during exercise.  It also can lead to addiction and intoxication.

Signs of caffeine intoxication usually occur with consumption in excess of 250 mg and at least five of the following symptoms not caused by a physical or mental disorder: restlessness, nervousness, excitement, insomnia, flushed face, dieresis, GI disturbances, muscle twitching, rambling flow of thoughts and speech, tachycardia or arrhythmia and periods of inexhaustibility and/or psychomotor agitation.

Caffeine meets all of the requirements for an addictive substance:  dependence, tolerance and withdrawal.  Caffeine withdrawal can cause numerous symptoms not only in adults but children as well.  Headache is usually the most common and typically occurs in the first 12-24 hours.  Other symptoms include:  irritability, fatigue, dysphoric mood, difficulty concentrating, decreased cognitive performance, depression, muscle aches and stiffness.  Peak withdrawal effects occur in 20-48 hours and can continue between 2 days to 1 week.  Therefore, caffeine should be stopped gradually.

For women, caffeine can provide other risk factors.  Pregnant women who consume caffeine have an increased risk of fetal growth restriction. Although, the fetal growth restriction is lower if caffeine amount is less than 100 mg a day.  Remember, an average cup of coffee is about 100mg and a 12 ounce can of coke is 35 mg.  There have also been some studies that have indicated an increase in caffeine contributes to an increase in bone fractures in older women. However a Swedish study found no correlation.

It all comes down to moderation, common sense and being conscious of the amount of caffeine in your favorite beverage.  Be an aware consumer, READ labels.  Remember, it doesn’t have to be illegal to be addictive and it isn’t only for adults.  Monitor your caffeine consumption and chances are you can avoid the side effects.

About the author… Kris Miller is a Nurse Practitioner at Billings OB-GYN Associates, she joined their team in this capacity in 2011 . She graduated from MSU School of Nursing in 1978 with a Bachelor of Science and earned her certification as a Women’s Health Nurse Practitioner in 1992.