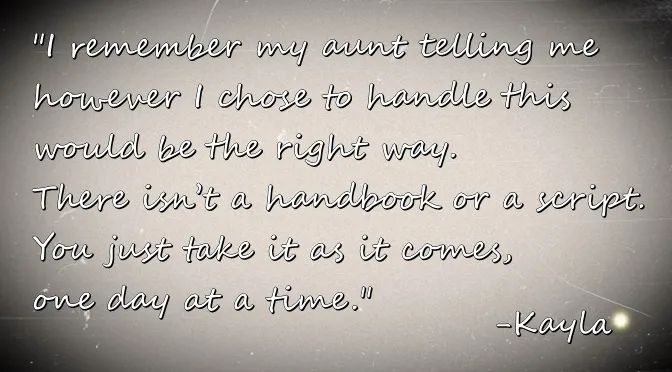 At one point or another in life we all experience some form of pain.  Experiencing a loss so extreme, it leaves behind a scar no one else can see as an ugly reminder after the healing has passed. We’re a world filled with great fears and stigmas. We constantly wonder if what we just said was appropriate or contemplate how to react to others’ pain. Some people have a filter, some do not. I recently went through this pain when I had a miscarriage following IVF treatments and had to develop an understanding of a world that was completely new to me.

Where it all began…

A little over two years ago I was diagnosed with stage 3 endometriosis. As a newlywed and new mother to three beautiful step-children, I felt an even stronger desire to have a child of my own. I always knew I wanted children, but having the reality of spending my days scheduling life around the wellbeing of three children made that desire even stronger.

My first year of marriage would be spent undergoing multiple tests, blood draws, surgeries and road trips. We attempted multiple rounds of fertility treatments but that process just fueled the fire even more for the endometriosis. After six failed months of treatment and countless hours of prayer, we decided to move forward with IVF. It is a grueling process and a large financial commitment, but one I wanted to endure none the less.

From highs to devastating lows…

What comes next is something I would never wish on anybody including my worst enemy. The IVF ultimately was a success. My body responded phenomenally to the treatments and our baby attached and began growing. I could see my life play out like a scene in a movie. The day of my first ultrasound brought on more panic than excitement. I pictured it all so vividly while sitting in the waiting room. I would be holding my husband’s hand as we would look up at the monitor and see the new member of our family. There would be many tears as we looked at the little heart beating away. The only problem was the reality didn’t match the dream. In my gut I knew. There was no heartbeat. There was no life.

It would be a grueling three weeks after that before our baby left. I chose no medical intervention and the concept of still being pregnant yet knowing our miracle was no longer alive was too hard, unbearable. I chose seclusion and spent three weeks with my parents, away from work, friends and reality. I remember at one point my aunt telling me however I chose to handle this situation would be the right way. There isn’t a handbook or a script. You just take it as it comes, one day at a time.

I began to understand just how many experience this kind of loss and don’t talk about it. It’s understandable considering I didn’t want to talk about it at first, either. Those who have experienced this seem to come out of the woodwork after you open up. I had an overwhelming feeling of shame and embarrassment. I felt as though I had let so many down. I questioned my ability and purpose. Why couldn’t I provide my husband with a child and my parents with a grandchild? Living the life of infertility is a world I never thought I would be a part of.

I’m proud to be a part of this community now. There is no shame in it and there is certainly no need for embarrassment.  Those dealing with this sort of loss need to go through it in the way they see fit, with the support of those around them. Some may not want to expose their pain and that is perfectly fine. This is not anyone’s battle but your own.

I accomplished something we thought I never would. I was pregnant. I became a mom.  The greatest thing I learned in all of this is that it’s fine to have your own pain. It’s okay to react in whatever way you see fit. Most importantly, never let anyone hurt you with the words, “Well you weren’t that far along anyway…” A pregnancy is a pregnancy and a great gift no matter the outcome. There’s no need to hide from it, and it’s okay to tell the world.

In December, I had a miscarriage.

About the author…Born in Wyoming, and raised primarily in Montana, Kayla resides with her husband Jason and three step-children Anyah, Jesse and Alex. When not on the go with active kids, Kayla works full-time at Sheridan Memorial Hospital and attends Northern Wyoming Community College for Nursing. She truly enjoys the time she has to spend with new family and most recently the opportunity to return to her passion of writing and share her story.