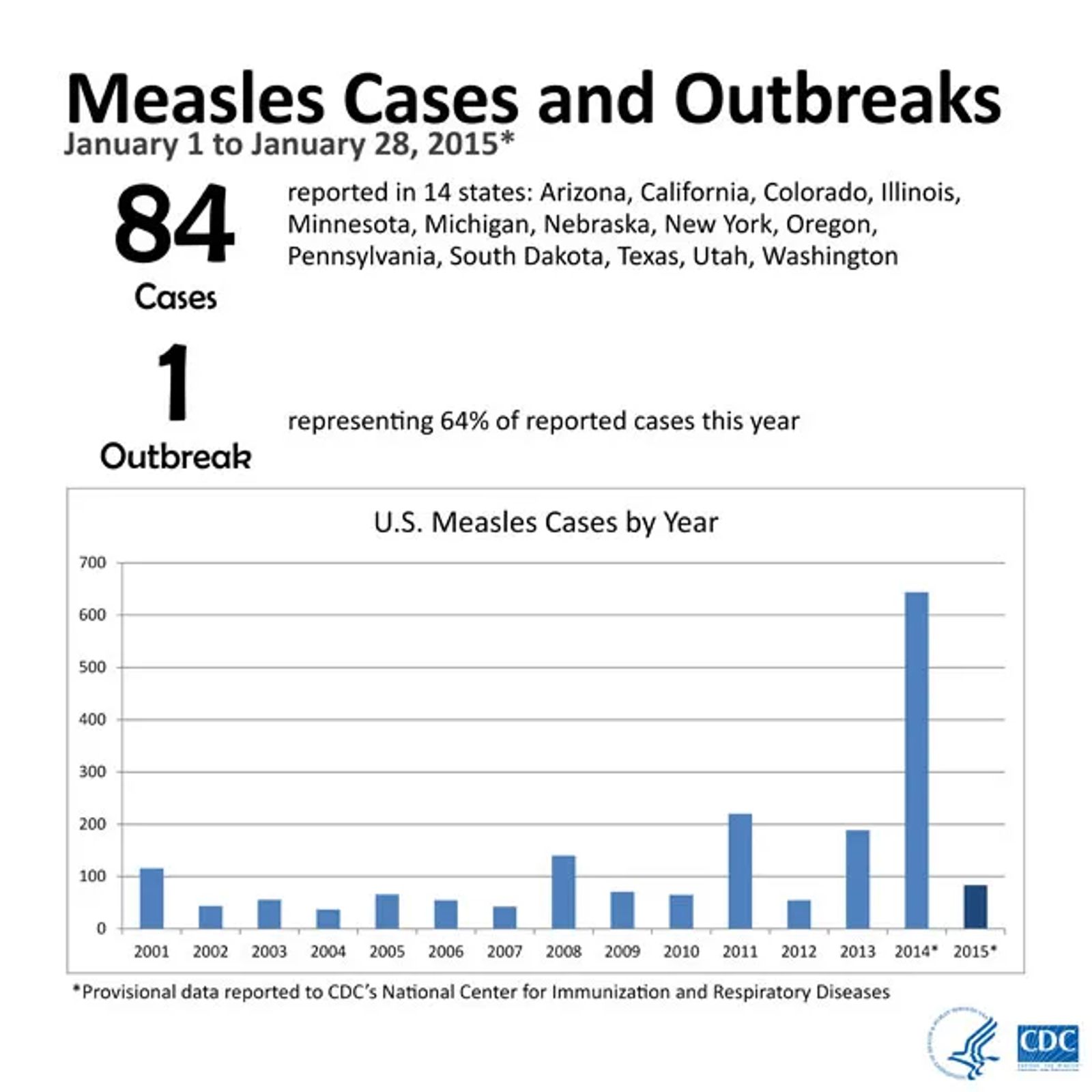 The Measles Outbreak: What You Need to Know

In light of the recent rise in measles cases nationwide, we asked Billings Clinic to provide our readers with their perspective on this outbreak. Following is Billings Clinic Pediatrician, Dr. Michelle Pierson's article, What you need to know about the measles about outbreak.

Most people, when planning a trip to “The Happiest Place on Earth,” spend the days and weeks prior to their vacation worrying about what clothes to bring, which stroller to take, what attractions they want to visit, and which restaurants they want to dine in.  Now an additional task will find its way to a parent’s pre-Disney checklist: Have the kids had their MMR vaccine? The number of cases of measles associated with the unvaccinated family that visited Disneyland in California is now reaching nearly 60 and has spread to 6 states.  The number of cases in 2015 is already much higher than is usually reported annually in the U.S.

In 2000, the Centers for Disease Control and Prevention (CDC) declared the end of measles in the U.S. due to the success of the MMR vaccine program here. However, in recent years, there has been an uptick of mini-outbreaks usually in micro-communities where vaccine rates are low with associated overseas travel.  In 2014, about 645 cases were reported in the U.S., the highest since the 2000 CDC “measles-free” claim.  In Asia, Africa, and South America, measles continues to be a major childhood illness and still is a big player in childhood morbidity and mortality.  Vaccine programs in these areas are thwarted by access, sanitation, storage, and inability to properly administer a shot.

The measles virus is extremely contagious and an infected person can be so up to 4 days before any signs of illness.  The illness starts with a fever, followed by cough, nasal congestion, runny nose, red watery eyes, and the hallmark rash that usually starts on the head/face and makes its way down to the chest, then arms and legs. There is no medication that can cure measles once contracted, because it is a virus.  The only treatment for the illness is supportive care (like IV fluids if dehydrated or oxygen if it’s gotten in the lungs).  Luckily, in the United States with modern medical facilities readily available, most cases are not fatal.  However, the virus can cause serious complications such as a bad pneumonia or infection of the brain (encephalitis) which could cause chronic disability (hearing loss, developmental issues, etc).

The only protection is prevention by getting vaccinated.  The current vaccine became available in 1967, and the booster was recommended in 1989. The MMR vaccine is administered to children sometime after their 1st birthday between 12-15 months.  The first shot results in about 93% immunity, which is then boosted at Kindergarten with a second shot giving higher antibody titers that should last many, many years.

Keeping as many people vaccinated as possible gives the public the benefit of “herd immunity” to protect children under 1 year old and the elderly.  However, in recent years, there has been a growing hesitancy toward vaccination in certain communities resulting in vulnerable geographical pockets.  In Montana, a child attending any public school can be exempted from the vaccine for medical reasons (documented severe allergic reaction to the vaccine or a medical condition that renders their immune system unable to receive the shot) or religious belief.  Vaccine exemption rates in our state are somewhere around 3.3% for the MMR vaccine, but are higher in certain counties in the state.  This is a sad statistic for our state, since the gentleman who invented the MMR vaccine is a Montanan, born and raised in Miles City.

Montana-born Maurice Hilleman ( Aug 30, 1919 in Miles City, MT – April 11, 2005 in Philadelphia, PA) was a microbiologist who worked for Merck during the 1960s and was the lead virologist on the development of the first effective measles vaccine. It is estimated that his vaccine has saved millions and millions of lives throughout the world. He was also a part of the development of many other vaccines for Merck, including the Chicken Pox vaccine. He also attended Montana State University in Bozeman.

While measles outbreaks will most likely continue in the United States in low vaccinated populations, it will only be a matter of time until a major complication or perhaps a death will be attributed once again to this virus.  This is a reality in the third world where a child dies from measles every 27 minutes, and a faint memory in the American consciousness when the last measles death was in 2003. This illness is only a plane ride away…or trip to Disney!

This article, 'What you need to know about the measles outbreak' was reposted with permission from Billings Clinic.