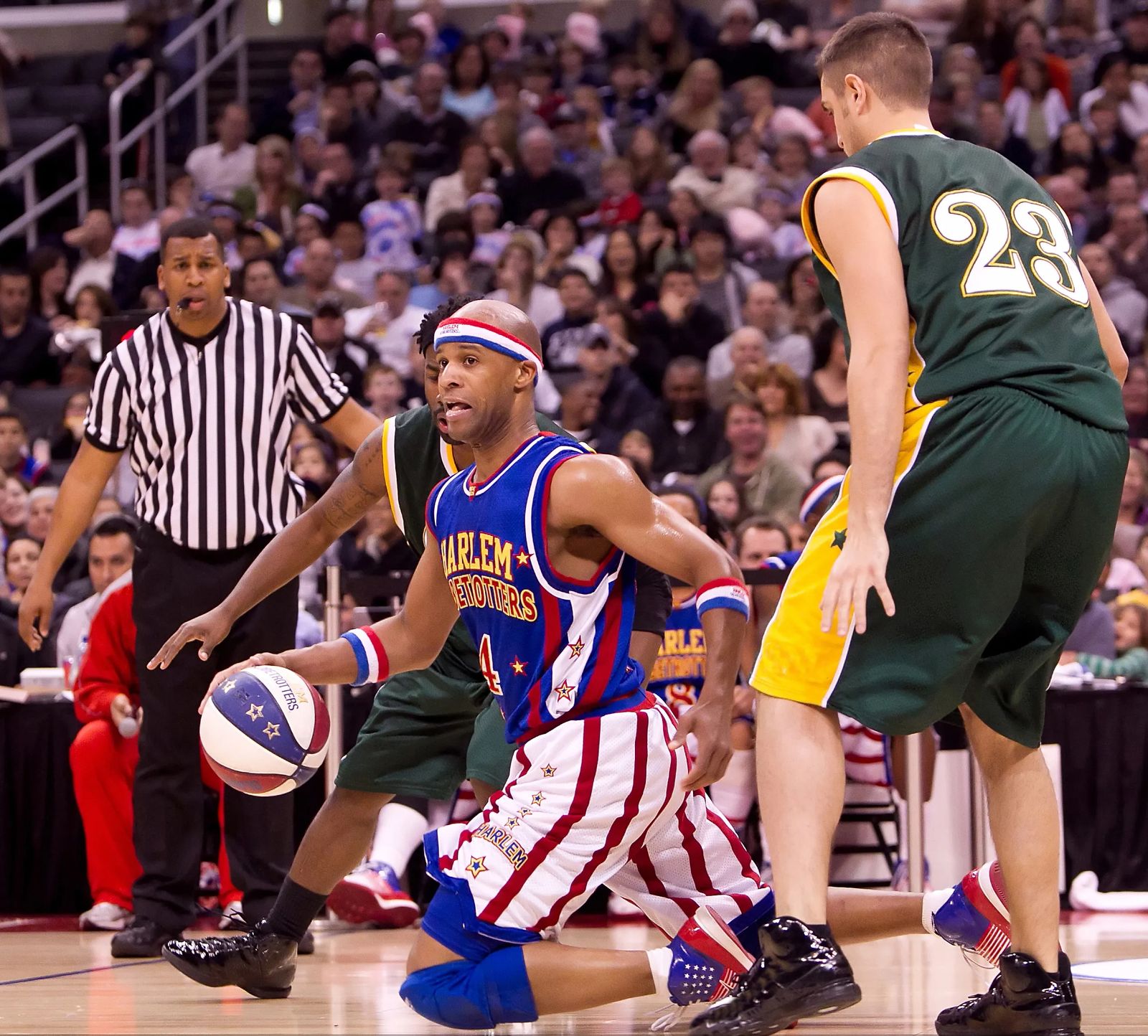 The Harlem Globetrotters are bringing their mad skills and crazy antics back to Billings on March 1 with their 2015 “Washington Generals’ Revenge” Tour. This family-friendly show will surely tickle your funny bone and dazzle your senses with incredible ball handling, crazy-amazing dunks and trick shots, and shenanigans galore! In anticipation of their arrival, Simply Family Magazine, had the opportunity to do a phone interview with Herbert ‘Flight Time’ Lang.

Known to be a ball handling wizard in his 16 seasons with the Globetrotters, he’s also competed three times on the Emmy Award-winning series, The Amazing Race, finishing as high as second place. From his beginnings with the Globetrotters to staying connected with his family, we give you SFM’s interview with Flight Time Lang…

SFM: You were pretty fresh from college when you earned your spot on the Globetrotters, what was that like?

Flight Time: I had finished college in 1998 and I went to work as a Trainer, and it was 10 months when I finally got invited to a Globetrotters Training Camp in August of 1999. It was pretty cool to get invited to a training camp for a team I had grown up watching on television.

SFM: What would you say to kids who are out there dreaming the dream of playing professional ball?

Flight Time: Well, my thing, growing up, when I was younger I didn’t always make the best grades until I got in 9th grade, I had a high school basketball coach who told me, “You know, you may not have made the best grades all the way up to 9th grade into high school, but the grades you make right now are gonna be the ones that follow you the rest of your life. So, even if you don’t turn out to be a great basketball player or football player, you still have an opportunity to go to school on an academic scholarship.”

Of course, all kids have the unrealistic dream of being a professional athlete or whatever, but there’s nothing wrong with that, as long as you set some realistic goals for yourself.

Between three touring groups the Harlem Globetrotters play over 300 shows/games during a season, Flight Time personally 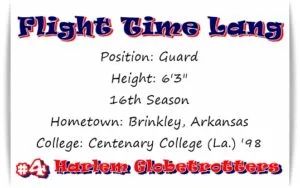 plays in 150-200 on an international and domestic tour. We wondered what the schedule is like, and how he makes it work with his family. (He has a 9-year-old son and 7-year-old daughter).

Flight Time explained that things get going with training camp near the end of September for about two weeks, and then the touring groups hit the ground playing. Things really takeoff on Christmas Day when the team kicks off the big U.S. and Canadian tour, which is four months of non-stop action. Once summer hits, the team does summer skills clinics, working with kids all over the United States. He noted they “get enough time off to get our minds right and recoup before we go out and do the job again.”

SFM: So…How do you do it; what’s the longest amount of time you’re typically away from your family?

Flight Time: The longest time is usually this time of year. But, I mean, I  get a chance usually to get close to home; if not at home then they have a chance to come out and play. Definitely when they come out, we try to make our family members feel as much a part of the team as possible. So, you know, I have my daughter out on the court doing the YMCA, I have my son sitting on the bench with the team, getting us water and stuff like that. It really lets them understand what we’re doing, and they get to see how people react, and you know, seeing us give autographs…It gives them the idea that, Dad is a little bit different; people actually think he’s kind of cool – even if they don’t always think Dad's the coolest.

SFM: How do you make it work during these long stretches? Skype…?

Flight Time: Yeah, I mean, with the technology that we have now, definitely Facetime and Skype, Instagram, and stuff like that is definitely a way to keep in close contact with your family. My son, he just sent me a video of him making a half-court shot and posted it on Instagram. He claimed it only took him two shots to make it, but he was jumping all up and down and was excited about it. He’s really good about texting. My daughter, she’s kind of a diva, she’s not really into sports, she says sports is not her thing. She’s more into singing and dancing…Nothin' wrong with that.

SFM: Shifting things back to basketball: What would you say has been your most memorable moment as a Globetrotter?

Flight Time: I would probably say, my first memorable moment – I’ve had a bunch of ‘em – the first one would be, having the opportunity to play in front of my family and friends back in Arkansas my first year. I’ve had an opportunity to meet the President – twice – so I mean that’s pretty cool – a cool thing to have had a chance to do. One of my other ones would be having the chance to play out on an aircraft carrier in the middle of the Persian Gulf.

SFM: How many tricks would you say you have in your ‘bag?’

Flight Time: Oh man, the number of tricks that I have in my bag…I don’t know, I have a couple that I take a lot of pride in: I have a trick shot where I throw the ball up and catch it on the back of my neck and flip it to the basket, I can spin the ball on my finger and shoot it in while the ball is spinning, usually whenever I’m in the arenas playing, I’ll go up to the audience and take shots from the stands. Don’t make it every night, but it’s always for the fans – they like to see long shots like that.

Be sure to get your tickets to see what tricks and skills Flight Time and the Harlem Globetrotters will be unleashing on Sunday, March 1 at 3pm at the MetraPark Rimrock Auto Arena in Billings. Get your tickets at www.metrapark.com or www.harlemglobetrotters.com/or by calling 800-366-8538 – this is a show the whole family will enjoy!