February 7-14, 2015 is CHD Awareness Week. In honor of that we share with you Brooklyn’s story… 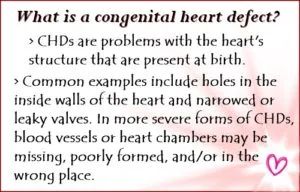 Picture it: You’re heading into your 20-week prenatal appointment. The excitement and anticipation builds as you prepare for your first glimpse of this precious being growing in your belly. You expect to walk away with the first picture of your baby and a video to show off to the family. You don’t expect a quiet to fall over the ultrasound technician as she measures once, twice, again, only to tell you that the doctor would be in shortly.

Something is not right…

Pregnant with their first daughter, this is what Lindsay and Joshua George would encounter during their 20-week ultrasound. Though the doctor couldn’t tell how severe her heart defect was, they knew their baby’s heart was not developing as it should have been. At the next appointment they would learn that surgery would be necessary. Though this news was shocking and devastating, the George’s note how fortunate they were to “have such a great doctor and ultrasound technician who detected her heart defect so early. Many families are not so lucky and they have to life flight their children.” 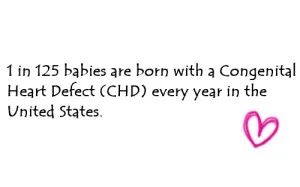 Now, in addition to seeing their OB, they would begin meeting with a high risk doctor and a Pediatric Cardiologist. Even knowing surgery was inevitable, they wouldn’t know precisely what they were up against until their daughter was born.

Focusing on what they could control…

Not a couple to sit around and feel sorry for themselves, Lindsay and Joshua would throw themselves into learning everything they could about the heart, defects, and anything that could possibly be related to their daughter’s condition. They did everything the doctors told them not to. They turned to the internet. They read articles by the Mayo Clinic, Stanford Medical Center, and other researchers. They watched YouTube videos made by heart parents that showed their children going through surgeries and memorials of those children who didn’t make it. They read, watched, and cried together so that they would be prepared as possible - so they would know what to expect when they saw their baby hooked up to machines, monitors, tubes…

They would study symptoms, read blogs, and ask other heart parents about what to expect so they could be their baby’s best advocate. They kept a close track on their finances and made sure insurance was covering the medical bills. They kept a log of questions to ask the doctors at their next appointments. They embraced what they could control.

At 37 weeks Lindsay would travel to Aurora, CO with her mother where they would settle in at the Ronald McDonald House, go to appointments, and prepare for the arrival of their sweet girl. Joshua would remain in Billings for work until it was time for delivery. Born at the University of Colorado Hospital, Brooklyn would soon be transferred to the Children’s Hospital and have her first open heart surgery at just two days old. On October 31, 2008, surgeons repaired her Coarctation of the Aorta. Following the surgery the new parents would watch over their daughter, fearing every abnormal beep, but Brooklyn proved to be one tough cookie. She came through the surgery well, and recovered steadily with tubes and wires being removed daily. Only a week following her surgery the family would be allowed to go home.

Upon returning home to Laurel, Lindsay and Joshua would closely monitor Brooklyn’s oxygen levels, her incision, and coloring. She would make a full recovery, and to date, not have to take medication nor would she have any limitations on activities.

Now, six years later, Brooklyn has grown into a beautiful, sensitive, loving, joyful girl (and big sister). She is also facing another operation. Since birth Brooklyn has had heart appointments with her Pediatric Cardiologist, Dr. Wiggins, every six months to a year.

Having monitored the pressure in her aortic valve over the last few years, Brooklyn now has a diagnosis of Sub-Aortic Stenosis. The family learned on November 7, 2014 that Brooklyn would need to undergo another open heart surgery.

While Brooklyn knows that she has “had her heart fixed,” she doesn’t fully understand what that means. Knowing their daughter best, Lindsay and Joshua are carefully preparing Brooklyn for the surgery to come this summer. Joshua notes, “There is certain terminology that we should use with children so they do not get scared.” The parents recognize they are facing different obstacles this time around.

Brooklyn will undergo her second open heart surgery in the summer of 2015.

Connecting With Other “Heart Families”

If your child has a congenital heart defect and you have questions or are looking for support, join the Mended Little Hearts of Montana Facebook page.