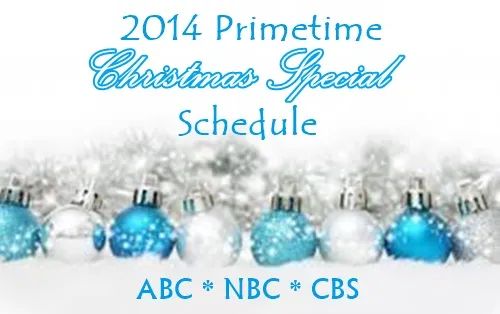 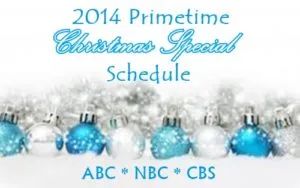 We’ve officially turned the calendar page to December, and with that comes a whole fabulous slew of Christmas specials dotting the primetime TV schedule. In our list of 2014 Primetime Christmas Specials we’ve included everything from animated classics to musical specials, so mark those calendars and bookmark this page, as we’ll be updating throughout the month as more information becomes available.

Toy Story That Time Forgot – Making its debut on ABC at 7-7:30pm

During a post-Christmas play date, the beloved Toy Story gang find themselves in a tricky situation when they discover the coolest set of action figures are a wee bit delusional, in that they don’t know they’re toys – a la the original Toy Story. It's all up to Trixie, the triceratops, if the gang hopes to return to Bonnie's room in this latest Toy Story installment.

Ahh, nothing quite signifies the holiday season like a good, old fashioned Charlie Brown special. In this Yuletide special that first aired in 1965, the gang looks forward to presents, while Charlie Brown is troubled by the holiday's commercialism. Jazz pianist Vince Guaraldi provides the music.

Christmas in Rockefeller Center – Shown on NBC at 7-8pm

After experiencing incredible success with 2013’s The Sound of Music LIVE! NBC is “Preparing to sprinkle fairy dust across America,” with a new live television production of the classic Broadway musical, Peter Pan.

Mermaids, fairies and a vile villain by the name of Captain Hook intertwine in this adaptation of the Broadway musical centering on a playful boy who never wants to grow old. Allison Williams, Christopher Walken and Minnie Driver star.

How Murray Saved Christmas – Shown on NBC at 7-8pm

This one-hour animated holiday musical special making its debut on NBC on Friday, December 5, 2014 includes a cast with voices that mom and dad will be thrilled to recognize – including Jerry Stiller as Murray Weiner, Sean Hayes as Edison Elf, Jason Alexander as Doc Holiday, Dennis Haysbert as the Narrator, Kevin Michael Richardson as Santa Claus and John Ratzenberger as Officer Bender.

Based on Mike Reiss’ best-selling children’s book of the same name, the story centers on cranky deli owner Murray Weiner who is forced to fill in for Santa one Christmas and does a “weirdly wonderful job.”

A Very Grammy Christmas – Shown on CBS at 8-9pm

This new Christmas special will feature performances by Ariana Grande, Maroon 5, Tim McGraw and Pharrell Williams. In addition to the performances the Grammy nominees for Album of the Year will be announced. All other nominations will be revealed the morning of December 5.

Frank Capra's classic stars Oscar nominee James Stewart as George Bailey, a decent small-town banker who learns what life would have been like if he'd never been born after he unwittingly becomes involved in a mistaken case of bank fraud, which threatens his spirit and tests his will to live until a wise angel compels him to see how his presence has made an incredible impact on the people of Bedford Falls.

(It’s a Wonderful Life: A Live Radio Play is also currently making a run at Billings' NOVA Center for Performing Arts, throughout December).

I Love Lucy Christmas Special – Shown on CBS at 7-8pm

Get into the holiday spirit with one of TV’s most beloved characters Lucy (Lucille Ball). Lucy, along with Ricky, Ethel and Fred put up Christmas decorations while reminiscing about the changes in their lives since the arrival of the Ricardos' son, Ricky. Later, Lucy works in an Italian vineyard to "soak up some local color" for a movie role.

The Great Christmas Light Fight – Shown on ABC at 7-9pm

Fred Astaire and Mickey Rooney are among those who lend their voices to this classic animated holiday tale, which explains the legend of Santa Claus and how he began delivering toys to children on Christmas Eve. As a young man, he tries to deliver toys to the kids of Sombertown, but is met with opposition by the bitter Burgermeister Meisterburger, a mayor who hates toys and deems them “illegal, immoral, unlawful.” Other voices include Keenan Wynn, Joan Gardner, Paul Frees.

Rudolph the Red Nosed Reindeer – Shown on CBS at 8-9pm

Rudolph the Red Nosed Reindeer – Shown on CBS at 7-8pm

Missed it on Tuesday? No worries this holiday classic that first aired in 1964 is back for a repeat performance on Saturday, Dec. 13.

Jimmy Durante narrates the story about the warmhearted man of snow, who risks a meltdown from rising temperatures unless he can get to the North Pole. Voices...Frosty: Jackie Vernon. Prof. Hinkle: Billy De Wolfe.

The happy snowman (voice of John Goodman) is threatened by a coldhearted inventor with a snow-removal spray in this animated adventure. Jonathan Winters narrates. Other voices include Elisabeth Moss (Holly) and Michael Patrick Carter (Charles).

Santa narrates the animated story of Buddy’s travels to New York City to meet the father he never knew he had. Along the way his unrelenting cheer transforms the lives of everyone he meets and opens his father’s eyes to the magic of Christmas. Voice cast also includes Mark Hamill, Ed Asner, Fred Armisen, Jay Leno, Matt Lauer, Gilbert Gottfried, Kate Micucci, Rachael MacFarlane, Max Charles and Steve Higgins.

Multi Grammy Award-winning singer Michael Bublé celebrates the holiday season with his fourth annual NBC Christmas special. Lending their voices and presence to his special are Barbra Streisand, Ariana Grande, Miss Piggy and The Rockettes. Bublé will be also accompanied by his band for an "unplugged" series of songs requested by his social media followers. The show originates from the storied Radio City Music Hall in New York City.

A Home for the Holidays – Shown on CBS at 8-9pm

The 16th Annual “A Home for the Holidays” special features uplifting stories about children from foster care and the inspiring families that adopted them. Each story is enhanced with performances by some of today’s most popular artists, including Jennifer Hudson and Train will appear along with Earth, Wind & Fire, Katharine McPhee…And more!

Four families will be spotlighted during the hour-long special.