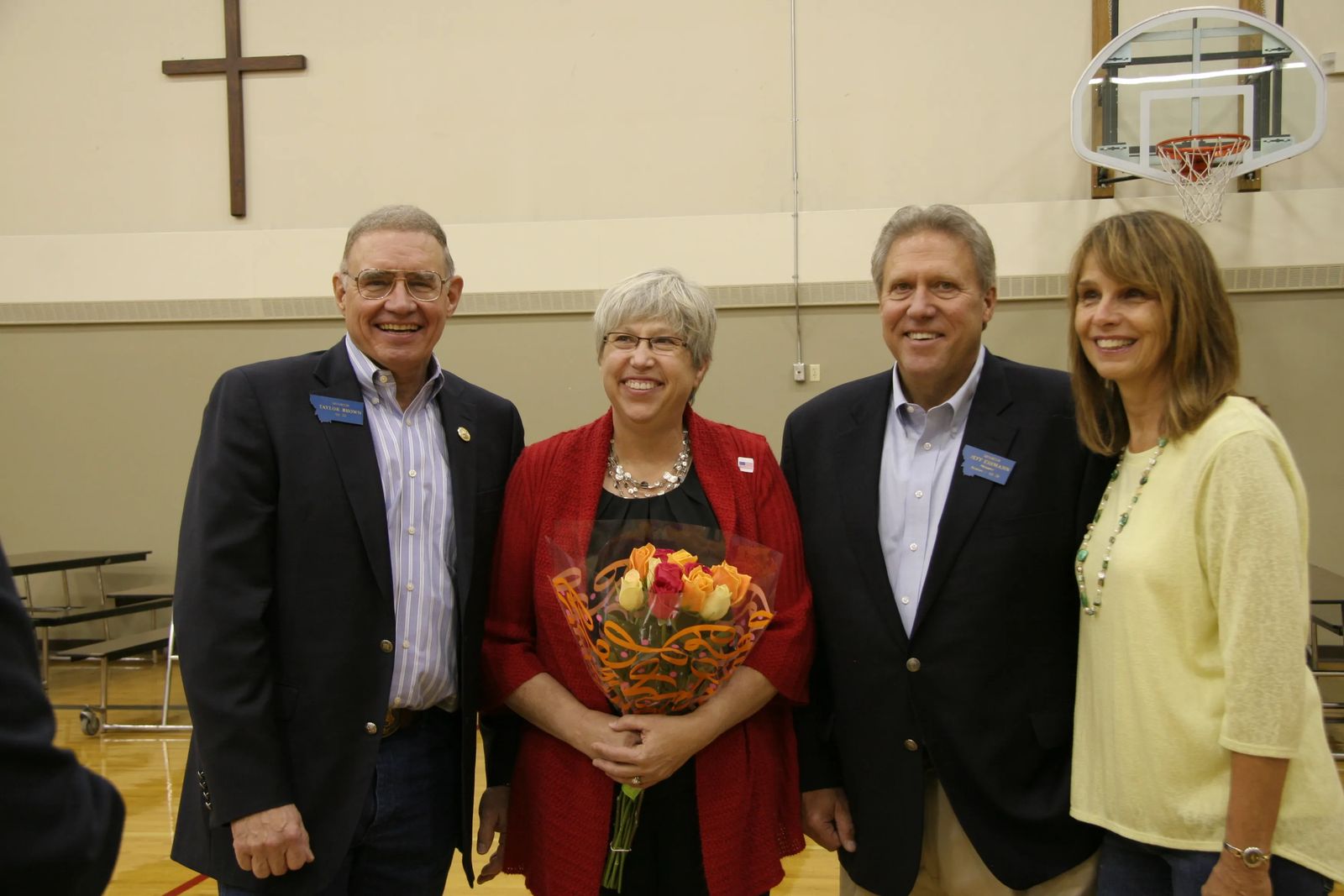 An assembly to thank local volunteers at Trinity Lutheran School Wednesday morning turned into a celebratory event when 1st grade teacher Mrs. Lynne Erger was called up to the stage by principal Mr. Richard Thomas. Pumping her fist in excitement, Mrs. Erger quickly realized the true meaning of her presence on stage when she was met by Randy Rice, the National Manager of Education Programs at Farmers Insurance.  She is one of 15 finalists across the nation selected to receive one of five $100,000 Dream Big Challenge educational grants, part of the Farmers Insurance Thank a Million Teachers campaign.

Launched earlier this year, the campaign invites individuals across America to offer heartfelt thanks to teachers, past and present, for their positive impact on students and communities.  Teachers were then invited to participate in the Dream Big Challenge, submitting proposals for their chance to be one of five outstanding teachers nationwide awarded with a grant to help them transform their school community.

With over 79 submissions in a pool of over 3,000 from all over the country, the process of whittling it down to the top 15 hasn’t been easy, said Rice.  “This has been quite the process, as we’ve received remarkable proposals from all over the country outlining a detailed budget and proposals,” explained Rice.  “As one of 15 in the entire country, and the only teacher in Montana, getting to this point for Mrs. Erger is really an amazing accomplishment.”

The Thank a Million Teachers program and Dream Big Challenge is really about pausing for a moment to recognize and thank teachers, said Rice.  “This is huge for Trinity Lutheran School.  Yet it is bigger than this school, bigger than Montana, this is a national story for recognizing these 15 teachers,” said Rice.  As a private school, Trinity Lutheran faces similar struggles as public schools.  “Both public and private schools need help.  Farmers Insurance feels good including a private Christian school,” said Rice.

Erger’s proposal dubbed “Operation FILL-it-Up” seeks to “FILL” a new library and computer lab in the process of being built with Furniture, iPads, Laptops and Literature (F-I-L-L).  “I remember growing up, our library at the school was the bookmobile,” shared Erger.  “As our school has grown, I’ve dreamed about making a library filled with books…if you build it up they will come.”

“I encourage everyone to participate.  This is a big day for Montana, Trinity Lutheran School and for those who serve in the Montana legislation,” said Senator Taylor Brown.

Beginning October 1st, the finalists’ proposals, including Mrs. Erger’s, will be available for public voting at www.ThankAMillionTeachers.com, allowing individuals nationwide to cast their votes for their favorite proposals.  “You can vote once a day, every day through November 30th,” said Kim Cummins, Farmers Insurance District Manager for Southeastern Montana.  “I encourage everyone in our community to get out there and vote, every day.”