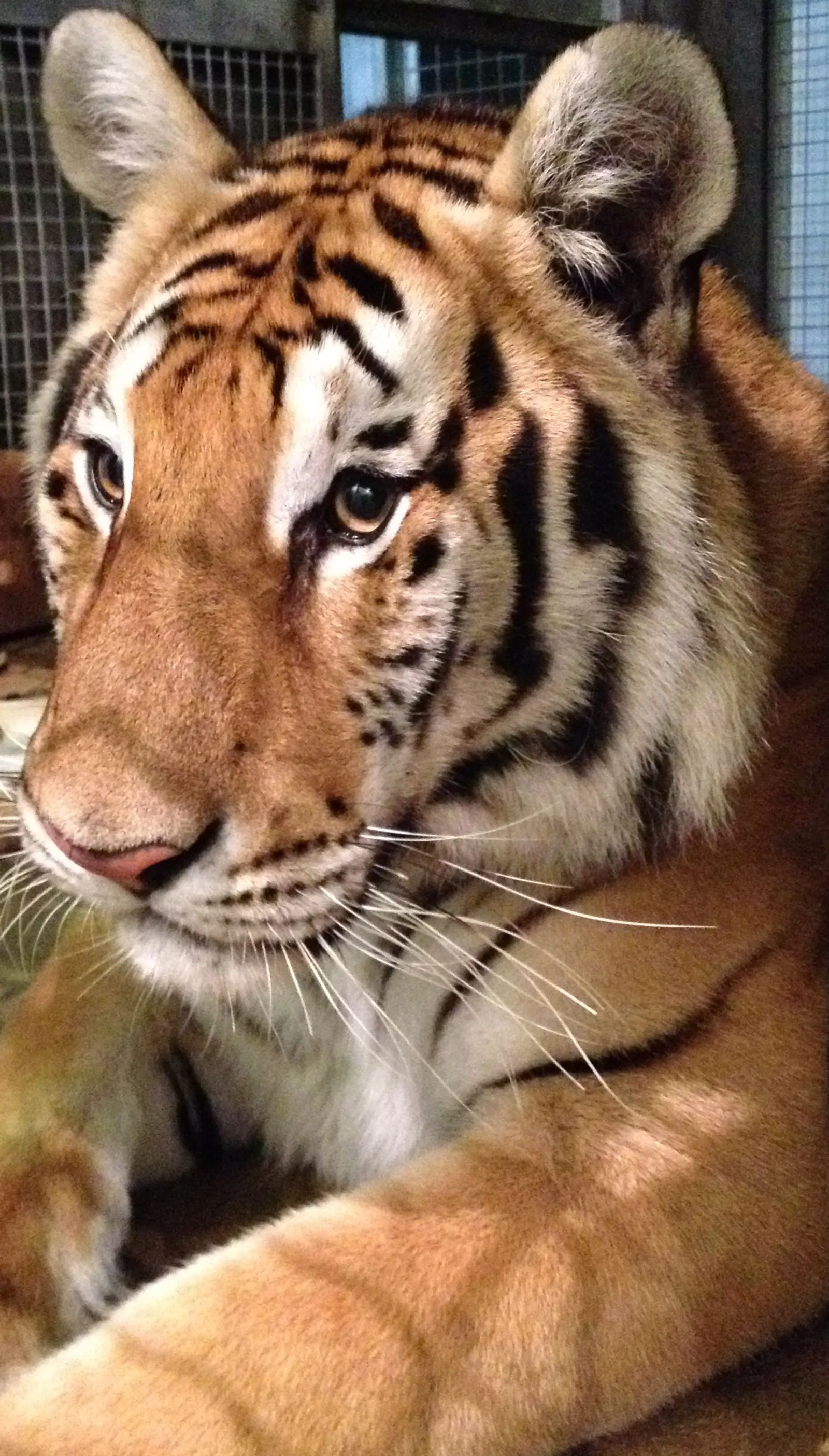 What is orange and black, nearly a “grown up” at 2 years old, and causing crazy amounts of excitement in Billings, MT? If you guessed the two beautiful cats, a.k.a. Siberian (Amur) tigers having recently taken residence at ZooMontana, you would be oh so correct. Amur tiger sisters Sophie and Jasmine will be making their public debut on June 14, 2014 during regular zoo hours: 10am-4pm and Friday, June 13 for Zoo members from 6-7pm.

In anticipation of ZooMontana’s exciting reveal of Sophie and Jasmine, Simply Family Magazine popped in to visit with Jeff Ewalt, ZooMontana’s Executive Director, to talk tigers – how the girls are settling in and tiger conservation, in general – and what’s up with that Living Wall we’ve been hearing so much about.

They’re unbelievable cats, I think they’re going to do wonders for the zoo and for tiger conservation and education.

Tigers are solitary animals, are they not? So how does that work?

They are. These two are actually sisters and they’ve been together their whole life, and they’re going to be together for their whole life. They know each other well, they get along very well, so they’ll do well together for the remainder of their life in that exhibit. In the future, should we decide to breed, that’ll be a question down the road, but it’s not something we’re considering right now. We’d bring in a male and probably have to keep that male separated from the female, but for now, and for these girls they’ll

How old are they?

They’re only about two, so they’re young, but just about full grown. We just got our official weights on them and they’re each about 330 pounds. They’re young, active, very mobile, they love the water - so they’ll be in that water a lot – which will be fun to see - they love interacting with people…It’ll be a fun experience for the visitors and the cats.

Are their personalities starting to shine through?

Yeah, they really are! They’re both easygoing animals, we haven’t seen too much sass out of ‘em, which sometimes with female tigers, you can. They’re really easygoing, they chuff a lot, which is kind of a welcoming sign, so that’s something that’s pretty fun to listen to. When we’re able to get them outside, they’re going to have a blast, I can’t wait.

How did they find their way into zoo land?

They were born at a facility in Florida and that facility contacted us after we lost Prince, and they had these two females that needed a place to go, so we brought them in. They were born in captivity, so they’re captive bred, so again, been around people most of their life, which is why we think they’re acclimating quite well.

What kind are they?

Siberian tigers, Amur tigers…They are cold weather animals, which is why we’re really excited for the wintertime here because they’ve been in Florida for their whole life, so for them to actually see snow for the first time and be a Siberian tiger is really pretty cool.

Tigers as an endangered species…How can you help, what can you do?

One of the things we want to do, is not only include tigers in our outreach and education programs and all that stuff that makes sense, but we are going to make sure that we get the word out about tiger conservation around the world. One of the things that our new signage will do – we’re really updating things down there with new signs, new glass, the whole shebang – the signage will have QR codes that we’re going to put on the site, that you’re going to be able to scan on your phone, which will take you to our website, which will have links to tiger conservation efforts around the world, including the AZA, which does a lot for tiger conservation around the world. Amur tigers are one of the rarest cats in the world, their numbers are not strong, there’s only a couple hundred left in the world, and so it’s a pretty necessary thing that we need to get the word out there about these animals.

So if you were a kid, what could you personally do?

Acknowledging and learning about the animal. I know that doesn’t sound very exciting, but right now we just want people to interact, get to know the animals, get to understand tigers, their status, and we’re hoping to do that through our signage. In the future as ZooMontana continues to grow and refine our missions and what it is we want to do, we will be able to allocate funds for conservation efforts.  In the meantime, literally just by coming here, by being part of the zoo you’re helping with that – and kids are helping with that.

Can you speak to why zoos are important and a valuable resource for the animals?

Obviously I’m a biased opinion, but there have to be zoos for so many reasons – education and conservation being the biggest things. The days of zoos being a place to come and see an animal pacing behind black barred enclosures on concrete -- those days are over, for the most part. Maybe out in some other countries those exist, but for the most part those days are over – especially in European and American zoos. Nowadays, it’s all about the conservation and education message.

On the other side of that, the unfortunate thing is that most of these zoos are harboring animals that don’t have any other place to go – whether they’re injured animals in some way, whether they’re animals that were raised illegally by somebody (which we have quite a few animals like that here). It’s unfortunate that there’s this status of wildlife that’s out there that has no place to go and would otherwise be euthanized rather than coming to a facility where they’re still gonna live the great life they’re gonna live – obviously it’s a smaller setting than in the wild, but there’s a couple of aspects to that, even. The difficult thing is sometimes people think of FREEDOM as this wide, expansive – you know we’re spoiled here in Montana because we have those big open spaces, but  most of the world doesn’t – including Africa and some of these places where you think of these giant Serengeti’s and these African elephants roaming, and that doesn’t exist anymore.

Now, the education side of it: the education that we’re able to provide to a child, to an adult, you know some of these kids that walk through the gate – even in Montana – it might be the only time that they’re ever going to see a Red Panda, learn about a Red Panda, or a Siberian Tiger and in my world, if we can reach 1-2 of those people – adults or children in a year – we’ve done our job. If we’ve created enough interest where they’re going to scan that phone and they’re maybe going to get more information or even donate to a conservation effort down the road…That’s huge! That money that’s going to conservation efforts around the world is making a difference. So Black Footed Ferret recovery, California Condor recovery, Tiger recovery…All these worldwide things that we’re putting into place to better wildlife around the world; that would not exist if not for zoological parks. I understand the aspect of seeing an animal behind an enclosure – it’s not easy, but it has to be there. If it wasn’t I think we’d be in a much worse place than we are now in this world, and I like to think we’re all making a difference in what we’re doing: on conservation, on education, on the quality of life for these animals. That said, the quality of life of animals in zoological parks is just incredible nowadays. The amount of training, the amount of enrichment – the mentally stimulating activities that we provide animals – it’s all about the animal now, it’s not about the visitors. Certainly we want the visitor to come in and enjoy it, but what we do, we do for the animals to ensure that they’re quality of life is top notch.

The Living Wall is done! Do you want to chat about that a little bit?

Sure! This whole thing came together so well. Certainly we’re still waiting on some animals, but for the most part, the official wall is done. We got a grant from the Montana State Tourism Department to build this to help draw people into the zoo, and then we had a couple of anonymous donations too, that made it happen. The amazing thing about it is we had roughly $30,000, give or take, to do this project and we wanted to make sure it was professionally done. But the amazing thing is, we have a resident house artist, Melanie Richard who is a volunteer extraordinaire and she has donated all her time and all of her talents to the wall. She has done all the painting, all the sculpting, everything that is in that wall. And then we have a volunteer contractor, Dick Scott, who did all the carpentry work for us at no cost. Basically the labor to build the wall was completely free. That’s, I think, what really allowed us to go top notch and really make professional-quality exhibits. It’s basically a journey throughout the world to see different types of wildlife from around the world. Now, the neat thing is the animals that are in the wall, are also kind of a dual purpose animal, not only are they there for education purposes, but they also can travel. They’re all trained animals so we can take them to schools and into the classroom. It’s so exciting. We really tried to focus animals in that wall that would hold the kids’ interests. I mean, what kid doesn’t love a big giant snake or a big lizard or a crazy bird that makes crazy noises. We still have a few that we’re working out on getting in – the Kookaburra should be here soon, a baby Mink that we’re working with…

Anything more about the tigers?

We’re really excited – I hope this shows folks that even without accreditation we can still move forward, certainly we’re working towards accreditation, but we are still moving forward and we’re excited about where ZooMontana is at and where it’s going. We hope the community is proud to have us and proud of the things we're doing.

Clearly you'll want to add ZooMontana to your list of must-visit places in the Magic City this summer so you can check out all the incredible awesomeness they've got going on.

Amur tigers, Sophie and Jasmine, will make their public debut at ZooMontana on Saturday, June 14, 2014 @ 10am-4pm. ZooMontana is located at 2100 South Shiloh Road in Billings, MT.