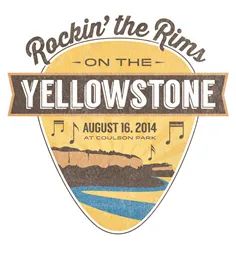 Mark Your Calendar: Rockin’ the Rims on the Yellowstone

A Summer Music Festival is coming to Billings this summer of 2014, taking advantage of the under-utilized riverfront coastline at Coulson Park. Right now, the Billings Parks and Rec department is busily landscaping, seeding, and otherwise beautifying the Magic City’s 13-acre riverfront park in preparation of the next big thing to make its way to Billings: Rockin’ the Rims on the Yellowstone. Scheduled for Saturday, August 16, 2014, this Summer Music Festival will have continuous live music on two stages from 11am-10pm. There will also be a variety of vendors selling arts, crafts, jewelry, textiles, food, and more.

This event is something the whole family can enjoy, as the festival will also include game areas for both children and adults. Everything from inflatable attractions to a high powered paint ball course. Alcohol will be served at the festival, but there will also be alcohol-free zones, thanks to a contribution from Pepsi.

But, at its heart, it is a music festival, so let’s get down to the artists and bands currently on tap to perform:

These artists have won American Country Music Awards, have appeared on Billboard’s top 5, made appearances at the Grand Ole Opry, and have played at music festivals such as Bonnaroo, according to MACK Productions, Inc.

Tickets are currently available at www.RockinTheRims.com or by calling MACK Productions at 406.294.9116 or emailing them at info@MackProductionsInc.com.

¯  Limited number of VIP tickets are available for $100

Though this is a one day event this year, plans are already in the works to make it at least a two day event next year, says Kim Welzenbach, president of MACK Productions, Inc., whose company in partnership with The Red Door Lounge are organizing the festival.

Attendees of this exciting new event are encouraged to utilize Billings “extensive bike trails as a means of traveling to the event,” says Welzenbach. As organizers have been working closely with the Parks department on multiple levels, a percentage of ticket sales for Rockin’ the Rims will be given to the Recreation Department’s Summer Camp Scholarship Program.

Get ready to rock the riverfront this summer at Rockin’ the Rims on the Yellowstone at Coulson Park in Billings, MT, Saturday, August 16 at 11am-10pm.