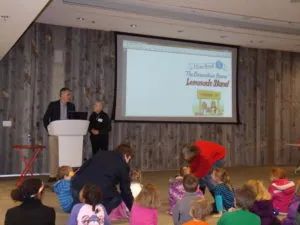 It was Saturday, February 8, 2014, the snow was falling and the temperature had finally inched its way above zero, as a crowd gathered outside the doors of Billings Public Library anxiously awaiting a reading by author Michael Berenstain, son to Stan and Jan Berenstain and taker over of the family legacy that is The Berenstain Bears. It was day two of this exciting visit by Berenstain, and the crowd of eager spectators - favorite Berenstain Bear classics clutched tightly in their hands - were eagerly anticipating a reading as part of the Billings Public Library's grand opening celebration; they got that and then some.

Berenstain had a special surprise tucked up his sleeve as he shared with his eager fans of young and old alike that he would be reading them a yet-to-be-published work entitled The Berenstain Bears Lemonade Stand. Also giving the audience the opportunity to see what a book looks like before it becomes, well, a book.

Attending this reading and book signing with (a very giddy) me were my daughter, my sister and her kids. We made our way into the new library and to the Community Room on the main floor amidst gasps of excitement as folks soaked in their first glimpses of their new library. Crossing the lobby we encountered Berenstain Bear books for sale, where we snagged The Berenstain Bears and the Tooth Fairy (a most ideal purchase, as later my daughter would discover her first loose tooth!), while I had my personal childhood favorite, The Berenstain Bears Get Stage Fright tucked safely in my bag. As the gaggle of fans secured floor space up front (the kids) and adults filled rows of chairs behind them, we settled in for this extra special reading followed by a book signing. One little peanut of around 2 springs readily to mind as she would happily make her way up to the table, with her little pink book in hand, and bounce excitedly in her pink sparkly shoes, pushing her book closer to this hero of an author as if to say, “I’m here, Mr. Berenstain! Sign my book!”

After our little group made it through the line, with the kids happily snagging their autographs, accompanied by a few kind words from

Berenstain, we moved on to explore the rest of the beautiful new building that is the Billings Public Library. The kids were enthralled with the Story Cone and Children’s Area as much as they were with the Teen section upstairs – marveling over the incredible soundproof study rooms. As we made our way back downstairs, and oohed and ahhed over the book return conveyor belt and tossed pennies into the reflecting pool, it was time to end this magical morning…Almost.

A random stop back into the Community Room showed us a dwindling line in book signing land, and being the lifelong fan that I am, I had to ask…”Can adults get books signed too?” With an affirmative response my sister and I planted ourselves at the end of the line, and awaited our turn as the kids patiently looked on at their goofy moms. When we reached the front of the line, Michael Berenstain paged through my beloved book, pointing out the illustration that he loved best – when Brother Bear forgets his lines on stage and his little tongue pokes out the side of his mouth. We learned that his parents taught him a great deal about drawing, though he would

later go to Art School before delving into the family business.

Later that afternoon Berenstain would return to the Community Room to draw illustrations and discuss his experiences as an illustrator of children’s books, with the children in the audience being encouraged to do drawings of their own. We didn’t get to attend that afternoon event, but we can only imagine what an incredible opportunity this was for the children who attended – what dreams were sparked over the course of these two days with Michael Berenstain. For me, the cherry on top of this fantastical day was when my 7-year-old turned to me and said, “Mom, this was the best day! Thank you so much for bringing me.” And with that, many thanks to the Billings Public Library and the Library’s Foundation and event sponsors for making this possible, and to Michael Berenstain for taking the time to be a part of this thrilling time in our community.