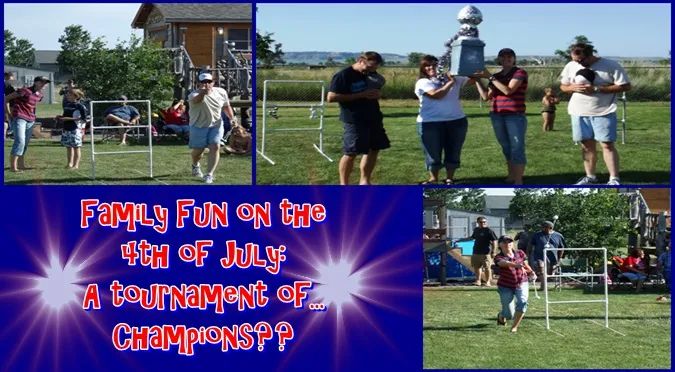 Family Fun on the Fourth of July: A tournament of…Champions?

For some families it’s Christmas or Thanksgiving that is the be-all, end-all of holidays, but for my family it’s steadily become all about the Fourth of July. Our traditions have evolved over time, but in the past ten years, we’ve pretty much solidified how the day will unfold. But to tell you the tale and really paint you a picture (and perhaps inspire some ideas of your own), we simply must begin with the back story…It began on the Fourth of July, years ago, where families and friends came together for food, fireworks, and fun. It started as a game, just a simple, friendly game of ladder golf (Irish horseshoes to us), but with each passing year the smack talk grew, the competition became more fierce – there were talks of practice sessions starting in June. Yes, it was only a matter of time before it became a full-fledged tournament; complete with teams, brackets, two trophies - including the gaudiest, most fabulous trophy ever and of course, bragging rights.

This year’s Fourth of July will be our sixth annual ladder golf tournament. After the parade in the morning, we all return and continue to gather at our main party point – my sister and brother-in-law’s house. As our friends and family arrive, my tourney partner and I wander around (stalk…whatever) signing up teams for the tournament. Once we’ve got all the teams signed up, we set up the bracket. There’s no time for pool play and it’s a single elimination tournament, so the stakes are intensely high. Seriously, the smack talk is epic.

To set up the bracket, we put the teams in a hat and draw for placement – though the previous year’s champions get a bye. We get our (free) brackets from http://www.printyourbrackets.com.

As one team after another is eliminated and we near the final faceoff, the “spectators” choose their favorites and join in the heckling, uh, supporting. After hours of playing, cheering, snacking, water-fighting, and good-natured ribbing a winner finally emerges to claim the trophy. The champions raise their trophies in triumph to paparazzi-level picture taking while they also sign the trophy and receive the most important instructions of all: You must bring the trophy back even more bedazzled than how you received it, you and your partner will exchange the two trophies at six months, and they must be – proudly – displayed at least a month before the following year’s Fourth, where you will bring it back and attempt to defend your title. The 2012 team may have had the best exchange in the history of our little tournament, as they performed the trophy exchange via a “drop and dash.” In other words, the trophy was placed on a doorstep, the doorbell was rung, and the delivering teammate was a-runnin’.

Maybe you’re wondering what on earth the kids are doing in the midst of all this fierce competition. During the first year of the “official” tournament, our oldest pair decided to throw their hats into the ring, the following year year, they decided to run their own tournament, with their own bracket. But not all of the kids are old enough or necessarily want to play, so there’s swimming (always adult-supervised), Wishy Washy (also known as: Holey Board, Texas Horseshoes, Washer Toss…), and a water fight at some point in the day is a must. For more in-depth ideas for outdoor family fun on the Fourth and beyond, check out the July 2013 issue of Simply Family Magazine.

After years of the smackiest of smack talk, my partner and I finally pulled off our first win in 2013 and after making it back to the finals in 2014, we're ready to reclaim our trophy (and bragging rights)! We'll just forget how we lost out in the first round that first year; clearly we could really only go up from there...