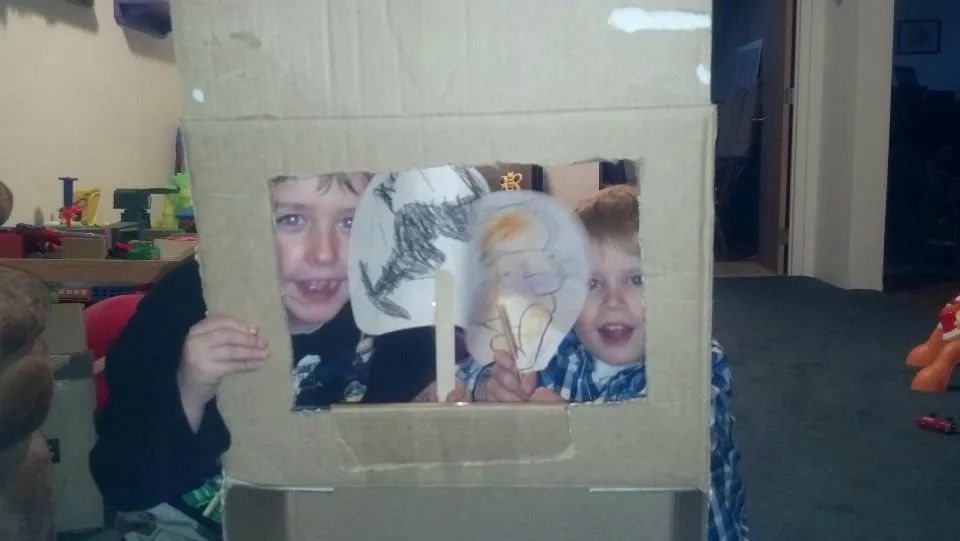 I've said this a million times, but just in case you missed it, I LOVE snow.  But I have to admit that snow + cold + kids is a completely different story.   I have raised outdoor-crazy kids and I usually think that's a very good thing.  On days when we can't spend more than a few minutes outside, it's up to me to find some great entertainment that preferably doesn't involve the TV, the Kindle, or the Leapster.

My most recent snow day activity is one of my favorites. I needed to keep my 15 month old, my 4 year old, and my 6 year old nephew happy and busy. I hadn't planned anything, so I raided the garage and the craft box.  Pretty soon, I was sitting in the basement holding coloring books, popsicle sticks, and a big box that once held diapers. Ta Da! A puppet show!

If you'd like to spend a snow day making a puppet show and you want to make it as easy as I did, here's what you'll need:

You can make this much more complicated.  There are a zillion adorable ways to make sock puppets, you can easily do felt cutouts and glue on decorations, or you can go the easy, last-minute route like I did. Easy also works well if you're working with a variety of ages, like I was.  I simply cut out characters from the coloring books.  While the kids colored them, I cut and taped the diaper box into some semblance of a stage.  When the kids were done coloring, I taped their characters to the popsicle sticks, and we were ready to roll. 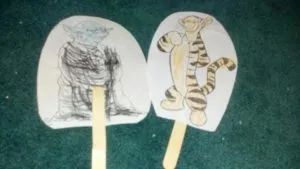 Most kids don't need imagination guidance. If yours are like mine, they have an overabundance of strange ideas. They were well used in this activity. They started out with story lines featuring their characters, but soon they added in toys that were nearby. Eventually they were doing "3D" puppetry, sending things flying through the cutout on the stage.

I was amazed and elated with the length of time this activity kept three kids of very different ages busy and having a great time. The pleasure of watching my kids play nicely with one another was even worth staying indoors. 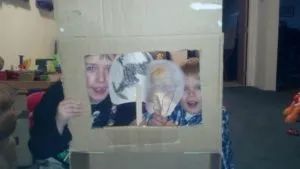