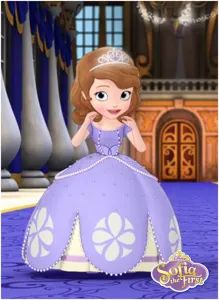 Disney to debut new princess on Disney Channel - ‘Sofia the First: Once Upon a Princess’

The Disney Channel is debuting a new princess on Nov. 18, 2012, Sofia the First: Once Upon a Princess. Princess Sofia’s introduction on Nov. 18 is setting the stage for a new Disney Channel series to premiere in 2013. We’ll not only hook you up with Sofia the First details, but keep reading for some ideas on how your little princesses (and princes) can celebrate this latest Disney addition by hosting a princess party.

About Sofia the First: Once Upon a Princess

Set in the storybook world of Enchancia, Sofia’s hard-working mother marries the king of this fairytale land launching young Sofia into the intriguing world of royalty – complete with a jealous step-sister (Princess Amber) and Royal Sorcerer with the requisite evil scheme. Other notable characters include Prince James, who Sofia notes is quite the mischief-maker; the beautiful Queen Miranda (and Sofia’s mama); King Roland, and Clover – the ever-present animal sidekick. Clover is a bunny and also Sofia’s best friend at the castle.

With nods to Disney classics of years gone by, Sofia the First includes appearances by the fairy godmothers from Sleeping Beauty and an appearance by Cinderella herself. Sofia Creator Craig Gerger notes that “By setting our story in the classic Disney world we're able to involve some longtime fan favorites. The fairy godmothers are the headmistresses at Royal Prep Academy, where they will teach Sofia and the children of other royals from all around the world.” Viewers can expect more iconic Disney princesses to show up when Sofia returns in 2013 who will “lend their words of wisdom to Sofia.”

If ever there was a time to host a princess-themed (tea?) party for your little princesses and princes, this is it. Since Sofia the First is premiering on a Sunday evening you might want to contain this to family fun, but you could certainly invite your kiddos best buddies to join in the fun – kicking things off with some princess-worthy activities followed by a viewing party.

Keep up with Simply Becca on Facebook: Parenting, Kid Talk, and TV Moms or on Twitter @LovingAbigail.