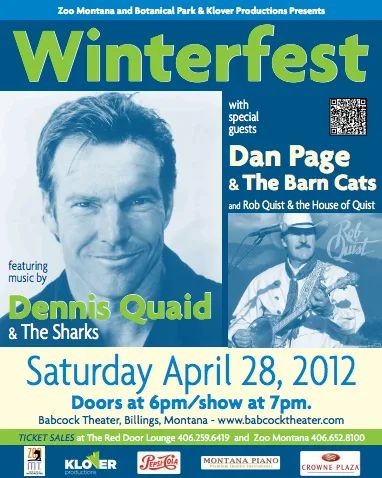 The evening of music will take

place at the Babcock Theater in Billings on Saturday, April 28th at 7:00 pm.

Dennis Quaid is the lead singer and rhythm guitarist. Quaid performs many original plus classic hits such as "Spill the Wine", "Gloria", and many more. The band's origins can be traced to one night when Quaid went to see actor Harry Dean Stanton and his longtime band (appropriately named the Harry Dean Stanton Band) perform at an L.A. club.

Quaid was invited to join the band onstage. At first reluctant because of his

decade long layoff from music, Quaid finally did perform with the band and was

successful enough that a member of Stanton's band approached Quaid about

starting a group of their own. They quickly began recruiting others for the band

and it wasn't long before Dennis Quaid & the Sharks, which specializes in "rock

'n' roll and country-soul," was performing at L.A. clubs. The band even throws in

a Jerry Lee Lewis song or two in the mix, such as "Great Balls of Fire," which

Quaid has firsthand experience performing, having played "The Killer" in a 1989

biopic. Quaid said the shows are as much fun for those in attendance as they

make a complete and utter fool of myself. I think that's the only way to have fun

(onstage), instead of trying to pretend to be cool and all the rest of that stuff."

The musical evening will begin with Dan Page and the Barncats, a Billings

quartet that blends honky-tonk classics and finely crafted originals. The band is

Shortly after the Barncats set, Rob Quist and the House of Quist will take the

stage. The House of Quist has been garnering industry attention with their high

energy live shows and compelling original songs, and is now recording with

such seminal groups as Mission Mountain Wood Band, The Montana Band and

Rob Quist & Great Northern; his award winning songs have been recorded by

Michael Martin Murphey, Loretta Lynn and Jack Gladstone, and he has been

inducted into UM School of Fine Arts Hall of Honors, recognizing him as "one of

be a limited premium VIP tickets for a dinner and silent auction at 5 p.m. which

will also include reserved seats and an after show wrap party. Proceeds of the

evening will support the education and conservation work of ZooMontana. This

entertainment company Klover Productions which is producing the event, an

organization dedicated to ensuring the future of ZooMontana.

very best in animal care, conservation and education. The Zoo and Botanical

Park is dedicated to the preservation, conservation and education of wildlife and

their habitats. The Zoo is located at 2100 S. Shiloh Rd. in Billings, MT just of the

www.zoomontana.org and on Facebook. Winter hours are 10am until 2pm.