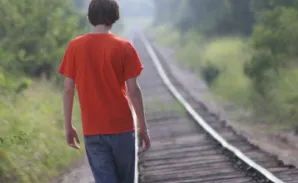 How far should you go to respect your teen’s privacy?

Closed or locked doors, whispering with friends and mysteriously passing through the house. Although these actions sound like those of an undercover operative, they are commonly attributed to teenagers wanting to preserve their privacy. Teens and tweens will go to great lengths to protect their privacy. They hide notes that were passed in class and develop code words for talking on the phone with friends.

In addition to staunchly preserving their own privacy, many teenagers expect their parents to strictly respect their privacy.

While exhibiting a healthy amount of mutual respect for each other’s privacy is an important skill to nurture, many parents find themselves questioning how much teen privacy is too much? Should you snoop in your teen or tween’s room when you’re putting laundry away? What if you find a letter in the pocket of her jeans that have been thrown into the wash? Is it wrong to check your teen’s email messages or instant messenger log?

Many parents believe that ‘snooping’, ‘spying’, or not respecting their teen’s privacy is the only way to find out about their child’s life. “It’s not always easy to establish when and where to draw the privacy line,” says Family Therapist, Marla Stein of Ridgewood, New Jersey.

The effects of respect

Respecting your child’s privacy lets your teen know you are beginning to accept him or her as a burgeoning adult as well as your child. A teen who feels safe that his privacy is respected might begin to loosen up some of the tight hold he has on preserving his privacy. “After my daughters and I established the routine that I would knock before entering their rooms they started leaving the doors open and spending more time in other rooms of the house. They wanted to have some control over their lives and for me to understand they are individuals,” shares mother of two teens, Louisa Pease of Hillsdale, Georgia.

Respecting a teen’s privacy can also backfire. Some teens view your respect of their privacy as permission to retreat into their own world. “My son withdrew from the family and interpreted our respect for his privacy as a license to do whatever he wanted,” offers Suzette Madden also of Hillsdale.

Both Pease and Madden questioned how much privacy their teens needed and deserved. “It is important that parents realize each child is unique, and because of that, the amount of respect and privacy must be unique,” adds Stein.

It is equally important to determine how much privacy you are comfortable with. If you’re not comfortable with the established boundaries, you’ll be less inclined to respect them. “Although I allow my daughter to keep her door closed when she has her friends over, she isn’t allowed to have boys in her room at all,” adds Pease.

How do you define respect? Upon self examination, some parents find they do not have clear boundaries for demonstrating and earning respect. Wanting your teen to respect your privacy and not rummage through your purse or bedroom, it can be tough to resist the temptation to not snoop. Reasons such as “I just want to see who she’s chatting on-line with,” “I want to know if there will be drinking at a party,” and “I wonder if he has a girlfriend” prompt parents to cross the line of privacy.

Interestingly, the level of respect you’re willing to extend is often based on the level of trust you have in your teen or tween’s actions and decisions. “Parents must trust their child in order to respect his privacy,” Stein poignantly notes. If you’re wondering whether or not to respect your teen’s high level of privacy, ask yourself if his secrecy is potentially harmful or irritating.

Does your teen want to watch his favorite television show in the privacy of his own room or is he looking for opportunities to visit explicit web sites? Does your daughter want to gush to her friend about a boy in her class behind a closed bedroom door or experiment with drugs and alcohol? If you suspect your child is involved in a dangerous activity or has developed a harmful habit, respecting his privacy may need to take a back seat to preserving his health and safety.

Children thrive and flourish on mutual respect. “Your teen needs to know you respect his privacy, but that you also have rules and expectations,” Stein explains. Talk with your teen to explain your concerns for his or her safety and well being, your expectations for mutual respect, and his repercussions if your trust is broken.

You can demonstrate your respect for your teen’s privacy in a variety of different ways. Resisting the urge to ask for several details about a social function or knocking before entering his room are small steps that help ease parents into showing you’re willing to respect his privacy.

Clear and consistent communication also significantly impacts respect. “If you talk with your teen and stay involved in his life, you’ll have a better handle on where he goes and who he spends time with. You’ll trust in his decisions and feel less of a need to spy on him.” Stein points out.

In addition to talking with your child, the way you talk him is another opportunity to teach respect. The tone of your voice shows your respect because sometimes the words you choose to convey your point are more impacting than the point itself.

If you need to discuss concerns regarding your child’s secrecy, select a neutral location (i.e., living room sofa or kitchen table) to discuss the situation. Choose a place where everyone is comfortable to freely express themselves and always approach a conversation from a mutually respectful point of view. SFM

Gina Roberts-Grey is a freelance writer who often writes on the subjects of families and children.