Home of the Exotic 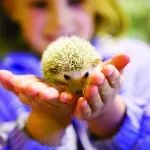 “I raised my first baby bird when I was about five,” explains Cory Freeman, owner and director of Animal Ed.ventures in Roundup. “It ultimately choked and I think I cried for about a year. I was determined to find out what went wrong and fix it for next time.” Thus was born Cory’s love of animals, and her determination to gather accurate information about a specific or rare animal’s needs for survival. However, her early trial and error days were not over just yet.

Using what she had learned from her baby bird experience, three years later at age 8, Cory successfully raised a nest of 4 baby woodpeckers. “Using what I had learned after the first bird trauma, and some sort of innate sense of how to teach the babies to find their food when they pecked, my rearing of the baby woodpeckers was a smashing success - they all flew out and lived around our house for quite a while.”

From there, Cory owned an assortment of animals such as snakes, lizards, small birds, and an array of pocket pets. About 14 years ago, Cory purchased a Sugar Glider (an Australian marsupial that looks like a cross between a chipmunk and a flying squirrel). “They were rare back then, and when I called the pet store I bought her from, concerned that she wasn’t eating much, they told me not to worry, and assured me Sugar Gliders were light eaters. It turned out that the pet store was feeding her the wrong food!” A month later, the glider was very sick from malnourishment. Cory called all over the country until she found a vet who gave her the information she needed to heal the glider. “I learned two things from that experience. The first was that this was likely happening to defenseless animals everywhere and secondly that I possessed a tremendous drive and ability to bird-dog and flush out correct information. When the same pet store sold me a sick tortoise, it was the last straw. My mission began.”

That mission is the driving force behind Animal Ed.ventures, a sanctuary for ill or unwanted exotic pets that offers education for would-be exotic pet keepers. Her programs educate children and adults alike on the pros and cons of exotic pet ownership, emphasizing the importance of doing research BEFORE bringing home a pet, and to be cautious of pet stores eager to sell an exotic animal.

Cory explains that in addition to being a sanctuary, Animal Ed.ventures is a back-to-nature movement of sorts that allows children and adults to reconnect with the wonders of the world and its amazing far away lands, through an acquaintance with exotic animals. “The experience offered is unique in Montana – different from any other established program,” says Cory. “It is totally interactive and every tour is privately guided. It is exciting, tactile, emotional, and REAL.” Cory describes it as a grounding force for many of the visitors.

Eighty percent of the animals at Cory’s facility are either “rescues” or “re-homes.” All of them, (even anteaters, like Animal Ed.ventures Phoebe, Montana’s only Lesser Anteater) are available in the commercial pet trade somewhere in the U.S. Many of these species have highly specialized needs, are very fragile, and are young in their evolution as “house-pets.” Many die during transport or after a short term in captive homes, driving home the point that not all great pets are great for all people. This also frames the critical importance of researching a pet’s care before bringing it home.

For now, Cory continues to raise awareness about the exotic pet trade. Caring for exotic pets is a tremendous undertaking and the facility is in need of upgrades to properly keep and accommodate the animals. This means Cory’s sanctuary is in need of sponsorship.

Animal Ed.ventures hosts “hands-on” safari camps for children as well as providing an interactive on-site zoo and an educational outreach program. It is truly an all inclusive facility, home to some of Montana’s rarest and most exotic animals.

To meet some of Animal Ed.ventures exotics, donate, or learn more about the facility’s programs, Cory and her animal ambassadors would like to invite you to visit www.animal-edventures.org. If you are interested in becoming a sponsor please contact Cory @ 406-323-3291 or porcupinesunltd@yahoo.com. SFM

Kat Hobza is a mother to two teens, a writer, editor, elementary school aide, aspiring professional sun bather and Olympic hopeful (as soon as there is an event where you can jog/walk a 1K).