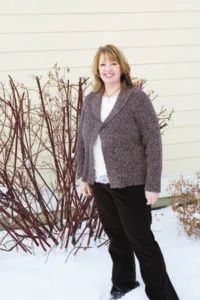 At first glance, Nicole Benge appears like an average Billings resident. Her face is warm and kind, her hair is stylishly long and her dress is business causal. What isn’t apparent at first glance is that Nicole is undergoing a transformation—one that is moving her toward a healthier weight and a healthier life.

It’s a change that is ongoing for this 40-year-old mom—one that is obvious by just looking at Nicole and to friends and family who knew her before. In December, after seven months on a medically supervised weight loss program at St. Vincent Healthcare’s Weight Management Clinic, she’s lost 60 pounds.

Nicole, who grew up in Billings, has tried to lose weight on her own before. In high school, she said she was comfortable with who she was but did try to lose weight. In college, Nicole said she put on more pounds. When she was married in her mid 20s, she lost 40 pounds. But her weight loss never stuck.

“Being overweight—I don’t think it had a big effect on my self-esteem,” she said, reflecting that she may have weighed 20 pounds more than her friends, but that was “perfectly fine.”

“I am very confident and successful in work and family,” she said. “I don’t think it affected me poorly in that way. I may have had too much self-esteem. But this is me.”

Nicole became concerned about her weight following the death of her father in 2007. He was a hard working man, not someone Nicole describes as obese, but large, something that runs in the family, she said. Her father had polycystic kidney disease, complicated by an onset of diabetes later in his life.

“I finally took in the health effects of my lifestyle. I didn’t want to become diabetic and deal with that,” Nicole said.

Nicole, who was already familiar with the medical weight loss plan, attended a seminar on surgical weight loss, which discussed gastric bypass and gastric banding surgery. She decided that this option wasn’t what she wanted

So Nicole decided to begin St. Vincent Healthcare’s medical weight loss and management program, supervised by Dr. Kathleen Baskett, MD, in May 2009. In the beginning, Nicole met with Dr. Baskett every two weeks, and they currently meet once a month.

An important component of the weight loss program is nutrition. Nicole also sat down with a nutritional consultant who helped her with food choices to stay in a calorie range of 1,400-1,500 calories a day, as recommended by Dr. Baskett. She was also advised to eat 80 grams of protein a day. Her weight loss program was complemented with a prescription appetite suppressant.

Nicole doesn’t have a target weight-loss goal in mind. When she began the program, she said she didn’t know what was realistic. After specific measurements were taken to determine her body mass and percentage of body fat, she knew she had work to do, but didn’t set a number.

“I look at a number and don’t know if I can get that low. I’ve changed my eating habits and started exercising, and I can continue living the way I am now because I don’t feel restricted and it’s not unreasonable. I guess it will end up where it will end up,” she said.  SFM

Next month: Discover the ways Nicole changed her life. From exercising with her young children to making time for walks to fitness programs with a Wii, Nicole tells her story of her lifestyle transition that is moving her toward a healthier weight.

Anna Paige is a freelance writer and journalist based in Billings and founder of Pen and Paige, a marketing, editorial and promotional company. Contact her at www.penandpaige.com.

“It is not necessarily one size fits all,” she said. “Some come in wanting to lose 10 pounds, others need to lose 200 pounds.”

During a first visit, Dr. Baskett focuses on a patient’s weight loss history, including how long they’ve been struggling with weight, what foods they consume, and what diets they have been on in the past.

She also asks lifestyle questions which help establish a patient’s eating habits (Do they eat breakfast lunch and dinner? Do they get up in the night to eat?), how they spend their time (What types of exercise do they get?  What activities are important to their life?), the people in which they surround themselves (Who does the cooking? Do they eat together? Do they eat out at restaurants frequently?), among others.

“All those things are important to assess a person’s readiness and to determine if they are in the right place to tackle weigh loss,” Dr. Baskett said. “It is one thing to say, ‘I want to lose 30 pounds.’ It’s another to say, ‘I want to make a commitment to do that.’”

Such weight management programs help patients prioritize their weight loss and develop goals that are realistic.

“We don’t put people on diets,” Dr. Baskett said. “A diet ultimately is something you go off of. Our goal is to help someone develop healthier habits, increase skills and knowledge so they have the ability to manage their weight, so this time when they lose their weight they will be able to stay at a healthy weight.”

The program focuses on nutrition and exercise. Dr. Baskett advises patients to pay attention to their calorie and protein intake. The program is not focused on dieting, but on the eating plan that has what Dr. Baskett describes as a “budget” of so many calories per day.

Dr. Baskett insists there isn’t any one bad food. “We don’t employ restriction. It is not sustainable. This is a lifestyle change and that is what Nicole has done and that is why she has been so successful,” she said.

Next month: Learn about BMIs, body fat percentages, calorie counting and what it all means to weight loss and overall health.