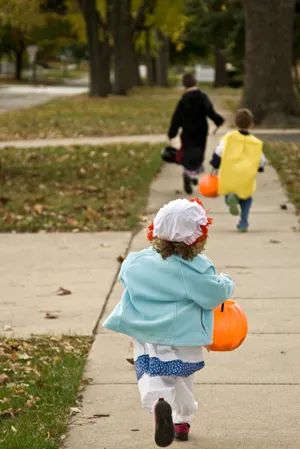 When it comes to Halloween, Rachel Romei decorates her home modestly and takes her three children—ages 10, 7 and 5—trick-or-treating early in the afternoon, but is sure to be back home in time for the witching hours.

“I love to give out candy and see all the costumes,” Romei said. Her home, situated on the 300 block of Yellowstone Avenue, is part of six blocks of trick-or-treating bliss. On October 31, the downtown neighborhood is considered Grand Central Station of trick-or-treating in Billings. The 100-300 blocks of Clark and Yellowstone Avenues are packed with ghouls and goblins of all age ringing doorbells of some of Billings oldest homes.

“For my children, it’s safe, and so many things are not safe anymore,” Romei said. “Within that six block radius, I don’t have a fear of letting them just be kids. It brings me back to my own childhood where you could roam your neighborhood on Halloween night and it wasn’t a big deal.”

In the ten years Romei has lived in the neighborhood, she has watched the popularity of participating in Halloween festivities continue to grow.

“So many more people bring their kids down, and each year more houses get involved. We’ll finally see a house that has their ‘trick-or-treat’ light on this year, and they never have before,” she said. “The contagious Halloween spirit—it just draws you in.”

Romei said she has never had problems on Halloween in the years she’s lived on Yellowstone Avenue, though her one concern is traffic. “It would be nice to close the street to traffic,” she said.

Around the block, Jodi Cockburn, who lives at 122 Clark Ave., is working to do just that. She hopes to close the 100 – 300 blocks of Clark Avenue to traffic, and just needs the consent of the block’s residents and a permit from the city, which she can apply for three weeks prior to Halloween.

Cockburn, who has two children, a daughter age 14 and a son age 11, believes Halloween on Clark Avenue is an important tradition to keep going.

“As a mother, if your kids aren’t here, where else are they going to be? I know this is a safe place for the kids. I know the neighbors. I know we won’t have to worry about checking their candy,” she said.

The Cockburn family has lived in a Georgian-style home at 122 Clark Ave. for nearly 10 years. They decorate the yard each Halloween and hand out candy to children. Often, Jodi will serve cider to adults. Last year she bought 1,500 pieces of candy and ran out at 8 p.m.

“Every year we run out of candy,” she said.

Each year the block prepares by decorating the morning of Halloween. “Nobody wants to show anyone what they are doing until the day of,” Cockburn said. “The surprises get bigger each year. It’s not a competition, but it just seems people step it up each year.”

In her neighborhood, Romei said she has a real sense of community. “They always watch out for you, like if my dog’s gone astray, someone usually calls or brings her back.”

She and her husband purchased their Victorian-style home, built in 1904, ten years ago.

“My husband always wanted an old house,” she said, noting that the home was a fixer-upper separated into three apartments. “It was a disaster, but he fell in love with it.”

Cockburn, whose colonial-style four square is the perfect backdrop for a Halloween-themed yard, is also fond of the neighborhood and the historic home in which her family lives.

“Year-round this is a great neighborhood. I love it down here. Everybody knows everybody, everyone watches out for everyone,” she said.

And that communal aspect works well on Halloween. “I haven’t met one person down here who doesn’t like it,” Cockburn said. “People who live down here are well aware of what goes on during Halloween, and if they don’t want to participate they just shut their lights off, and those who do participate are happy to.”

Cockburn and her husband, even from the time they were dating, loved Halloween. Her husband is known for his over-the-top Halloween costumes.

“Some people think that is kind of weird, but we love it. It’s like adult dress-up day,” she said. “We have more Halloween boxes than we have Christmas boxes.”SFM

Anna Paige is a freelance writer and journalist based in Billings and founder of Pen and Paige, a marketing, editorial and promotional company. Contact her at www.penandpaige.com.

Remind kids not to approach houses that do not have lights on. Children should know that some people choose to abstain from Halloween festivities. They should respect this choice.

Kids should never enter a house, invited or not unless parents are present and children are given permission.

Unwrapped candy, candy that has a torn wrapper or strange looking candy should be thrown out immediately.

Be visible by adhering reflective tape on visible parts of costumes, shoes or treat buckets. This will help parents and drivers see your child more easily.

Have your child carry a flashlight. This will not only help navigate the dark but it also helps you see your child.

Set limits. Explain to your kids exactly where they are and are not permitted to go. This will help you find them quickly if you get separated.

Trick-or-Treat in groups. Not only is this more fun, but adds safety to the outing. Make it a rule that the group stay together from house to house.